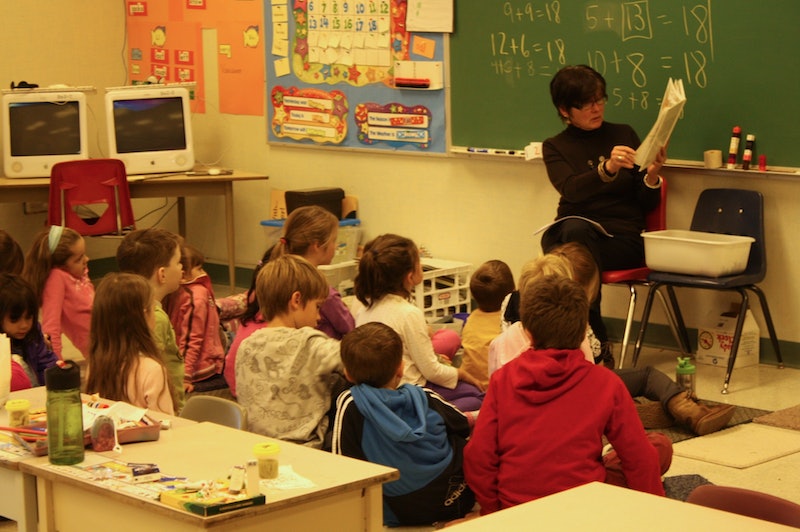 Despite evidence against innate disparities in academic performance between boys and girls, girls frequently feel less confident about their intelligence and, in some parts of the world, lag behind male peers in math and science. Since these problems appear to be cultural, how can we change our culture to support gender equality in the classroom? One new study on how to get girls to succeed in school confirms all the popular cliches about the power of teachers: A woman at the head of the classroom increases girls' confidence and leads to higher math scores. The study compared test scores of over 14,000 students in South Korea and found that female teachers catapulted girls about a third of a year ahead of their male peers.

Is this something to celebrate, or is it bad news for boys? Studies on gender and school performance are mixed, with one even finding that girls achieve more in all subjects. Perhaps we should be focusing on how we can make boys' test scores skyrocket too.

Furthermore, in the U.S., 76 percent of public school teachers are female already. Do we really want to widen that gap? Though the study speaks to the importance of intelligent role models for girls, but we also need role models for boys, especially ones in less traditionally masculine roles like teaching. Since I wouldn't advocate filling more classrooms with female teachers because of their gender, here are a few other proven ways to improve girls' interest and performance in STEM fields that would probably be useful to boys as well.

1. Provide kids, especially girls, with toys to explore their interest in STEM subjects.

I'm looking at you, "math class is tough" Barbie. "Computer engineer" Barbie who gives her friends Stephen and Brian the bulk of the coding work, you're not helping either.

But GoldieBlox's "Princess Machine" ad and books about girls who build things? You are helping. So are companies like buddingSTEM, a fashion line for girls who love dinosaurs and trains. How are girls supposed to reach their potential in math and science if they enter school with less practice?

The same study found that a country's poverty was correlated with its math gender gap, probably because students had less access to a good education.

4. Provide students with mentors outside the classroom.

As the study on female teachers highlights, seeing women succeed in STEM helps girls believe they can as well. The same goes for racial minorities. Organizations like Girls Who Code provide girls with supportive communities where they can grow in male-dominated fields. It's also important for mothers and other authority figures not to disparage their own math and science abilities or other women's. Girls learn who they can become by observing their elders, so teach them that they can become anything they want.