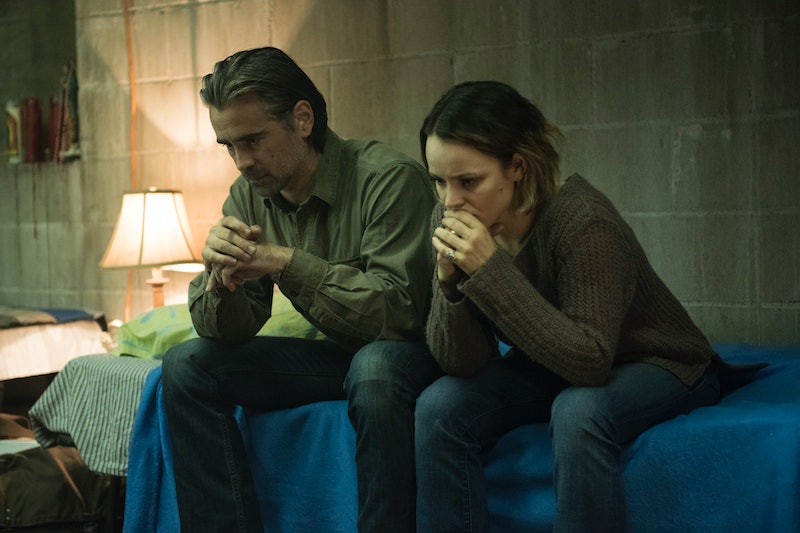 Although I can't confidently say if True Detective Season 2 has redeemed itself yet, I can say that an action-packed 90-minute season finale gives me hope. With the Season 2 finale of True Detective airing on Sunday, Aug. 9, theories about how the show will wrap up are flying around. But one way to get some insight into what will actually happen is by looking at the title of the season finale, "Omega Station." Unlike some shows where an episode title may not necessarily provide any understanding into the content of the show, True Detective creator and writer Nic Pizzolatto puts meaning and little references into almost everything he writes, so it's not outrageous to look at the meaning of "Omega Station" for clues.

This isn't the first time the name of an episode has sparked conversation. The Season 2 premiere episode title was "The Western Book of the Dead," which was based on philosophical writings. I can't say I necessarily always understand Pizzolatto's allusions and references (and often they are too abundant), but there seem to be some simple connections to the title "Omega Station" that can help fans navigate through the fog and haze that has been True Detective Season 2.

While the above preview of the final episode with Vince Vaughn, Colin Farrell, and Rachel McAdams may not indicate much, the episode title gives fans a jumping off point to come up with theories about what the season finale — and possibly the entire season— is all about. Here are four possible inspirations for the title.

People are used to hearing the word "omega" when it comes to fraternities and sororities or when referencing the high-end watchmaker. That's because omega is the 24th and final letter in the Greek alphabet (and the watch company OMEGA uses the Greek symbol as their logo, pictured above). The word has come to mean "the extreme or final end," according to Merriam Webster, so since "Omega Station" is the Season 2 finale, "omega" is a fitting term — especially since True Detective doesn't continue its storylines from season to season. But while the Greek translation provides insight into "omega," what's going on with the "station" part of the title?

This may be too simple of a connection for Pizzolatto, but a lot of the action of Season 2 was set off by the building of a Californian high-speed railway. While Vaughn's character recently discovered that Ben Caspere was never going to actually use his money to finance the project, the word "station" ties in nicely with the idea of a railway. So literally, the title "Omega Station" is the final destination or stop of True Detective Season 2. And perhaps the end of the line for another character or two.

There are actual "Omega stations" out there in the world that were established by a U.S. Navy project from the 1960s. The scientific radionavigation system was created by the U.S. with Argentina, Norway, Liberia, France, Japan, and Australia for navigation of nuclear bombers, but it was also helpful to submarines. The system was shut down in 1997 after GPS made it obsolete and the eight Omega stations were closed. Two of these stations were in the U.S., but with the locations in LaMoure, North Dakota and Haiku, Hawaii, there is no relationship to True Detective Season 2's location of California. Still, the idea of a navigation system while the characters attempt to piece the criminal puzzle together could be a connection (a vague one if that). And as the Omega station in Hawaii is derelict (as seen in the above video), it reminds me of the industrial and uncared for fictional city of Vinci, California.

While I can't find any evidence of Pizzolatto being a fan of the science fiction video game series Mass Effect , there are eerie similarities to its world and the season finale title of True Detective. According to the Mass Effect wikia, Omega is a space station on an asteroid that has been a "haven for criminals, terrorists, and malcontents for thousands of years" in the video game series. While Vinci, California hasn't been around for thousands of years, the description from Mass Effect isn't far off of the description of Vernon that Vanity Fair wrote of the city Vinci is based on, Vernon, being "used as a dodge and a tax haven."

Although the resemblance to Mass Effect doesn't necessarily provide insight into what will happen in the season finale of True Detective, the fact that the humans in the video game series call Omega "the world without law" rings particularly true as the show's time in the lawless city of Vinci comes to a close.