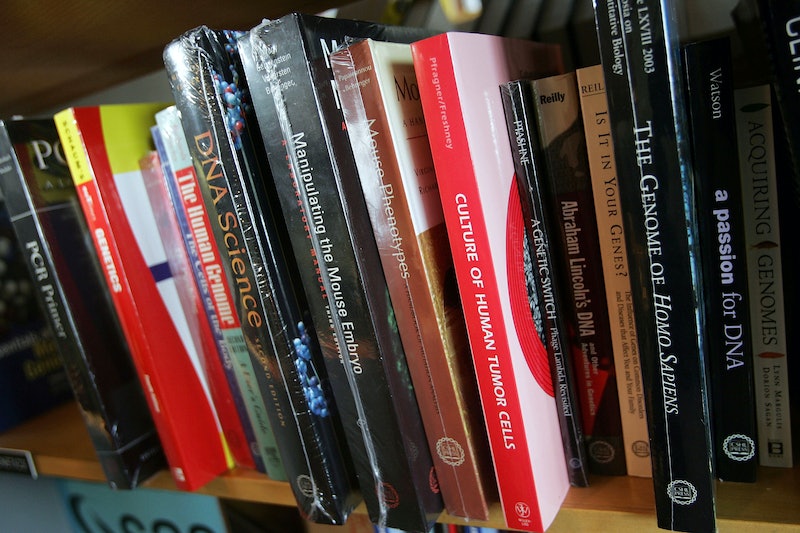 I've got bad news, Millennials and Gen-Z'ers: Today, college textbooks are nine percent more expensive than they were last year. This price increase is part of a decades-long trend, in which textbook prices have risen more than 1000 percent. Yes, 1000.

This year's cost increase is a sharp spike, to be sure, but it wouldn't be so terrible if college wasn't already such an expensive game in the United States: University students who graduated this year left school with the highest rates of debt yet reported. The average graduate has $35,000 worth of student loans, and only 29 percent of the Class of 2015 had no loans at all. What's more, 17 percent of graduates' parents have taken out loans for their children's educations. Like textbook prices, the rising cost of university attendance is part of a longstanding trend. At $68 billion, the U.S. education debt for 2015 is up roughly 900 percent from 1994, a year in which the average student loan debt was just over $10,000.

Millennials accept the rising costs of university attendance, but that doesn't mean they aren't doing what they can to avoid debt without compromising their educations. Although 65 percent of students reported being unable to purchase at least one expensive textbook last year, they aren't foregoing class materials altogether. Rather, many opt to rent, buy used, or purchase e-book versions of the assigned texts, and these thrifty choices drive down the average textbook cost per student. Today, the average undergrad will pay $563 for textbooks, down roughly 20 percent from a few years ago, despite the rise in hardcover textbook prices themselves.

Outside of college, the cost of books in general can be prohibitive. Hardcover prices hover around $20, even for children's books, making building a home library a daunting — if not impossible — task for individuals and families. Charity efforts aimed at getting books into low-income households have exploded this summer, from JetBlue's book vending machines to Reach Out and Read's baby book bundles, but books remain a luxury for many U.S. families.

Millennials from working class families face tougher post-high school decisions than their more affluent peers, and may forego college in favor of diving headfirst into the job market.

The spoonful of sugar to this bleak situation, perhaps, lies in the job market. According to the Bureau of Labor Statistics, bachelor's degree-holding workers make nearly twice as much each week as those with only high school diplomas, and are unemployed at nearly half the rate. The report fails to take into account the length of employment: an important distinction for Millennials, who are often forced to choose between taking an unpaid internship in their field or making money outside it. I wouldn't hesitate to guess that Millennials with four-year degrees aren't bringing home anything close to the $1,101 per week stated in the BLS report.

According to a 2014 article from The New York Times, "[n]o one tracks how many college graduates take internships," so there's no way of knowing whether or not Sally's four post-graduate internships are any more average than Jack's lone unpaid position. Speaking from personal experience, however, I took two unpaid internships in the almost six months between graduation and finding a job, and I consider myself one of the lucky ones.

By lowering textbook costs, e-books, book rentals, and compassionate faculty members are certainly making college more accessible to Millennials. It's important to spread the word that attending university doesn't have to break the bank, because its reputation precedes it. Millennials from working class families face tougher post-high school decisions than their more affluent peers, and may forego college in favor of diving headfirst into the job market. For most students, pursuing a four-year degree means working part-time — or not at all — until graduation. The benefits of a college education are obvious, but working part-time until you have one won't pay the bills.

So get the word out. Ask your faculty to select lower-priced class materials. Tell your friends about your favorite book rental websites. Buy your niece an e-reader for graduation. Because, in spite of the rising costs, a college education should be available to everyone who wants it.

More like this
Twitter Has *A Lot* To Say About The "Single Penalty”
By Sam Ramsden
Watch Jacinda Arden’s Devastatingly Honest Resignation Speech
By Sam Ramsden
What The UK Blocking Scotland’s Gender Recognition Bill Means
By Sam Ramsden
Prince Harry Incorrectly Recites Christina Aguilera’s “Genie In A Bottle” Lyrics
By Jake Viswanath
Get Even More From Bustle — Sign Up For The Newsletter
From hair trends to relationship advice, our daily newsletter has everything you need to sound like a person who’s on TikTok, even if you aren’t.