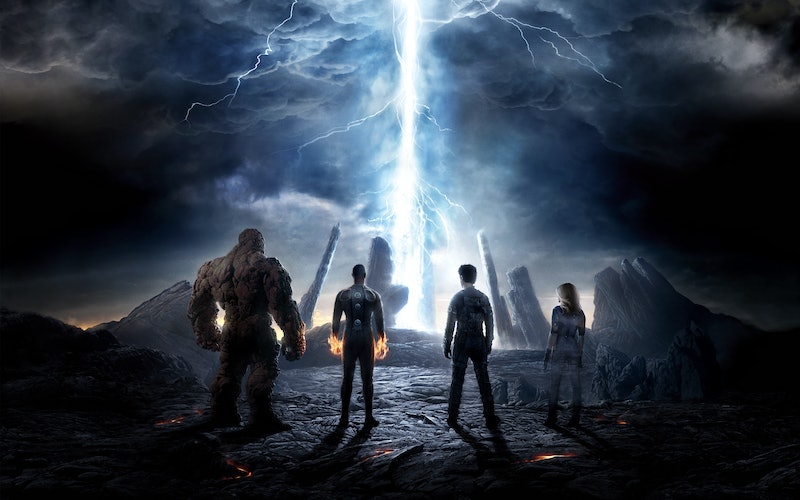 Following the release of the new Fantastic Four film, fans saw one angry review from an especially unexpected party: director Josh Trank. Last Thursday night, Trank tweeted a message, one that has since been deleted, decrying his superhero venture as a regrettable departure from what he originally set out to create. "A year ago, I had a fantastic version of this," said the director. "And it would've received great reviews. You'll probably never see it. That's reality though."

Having delighted the world with Chronicle, Trank is surely a talent worth keeping our eyes on, and a director who has proven his chops when it comes to producing an amazing film. The 2012 found footage sci-fi movie is what earned Trank public interest, the Fantastic Four gig, and a short-lived job directing a Star Wars feature in the first place — through Chronicle, we've all seen the creative strengths of Trank. If anyone is worried about what the less-than-stellar reviews of Fantastic Four might do to Trank's career, they might be wise to look at this list of directing greats who also spoke out furiously against their own feature films. Because Trank isn't the first, and he probably won't be the last.

Steven Spielberg Hated Indiana Jones and the Temple of Doom

After turning out blockbuster merriment with Raiders of the Lost Ark, Spielberg felt he had lowered himself to nastiness with his second Indiana Jones venture. The grimmer, meaner, and leagues more culturally insensitive sequel took a lot of heat from its own helmer following release. Right around the release of The Last Crusade, Spielberg told The Sun Sentinel , "I wasn't happy with the second film at all. It was too dark, too subterranean, and much too horrific. I thought it out-poltered Poltergeist... There`s not an ounce of my own personal feeling in Temple of Doom."

Kubrick’s 1953 feature debut is virtually unattainable today, a fact that would please the late director. In 1994, Kubrick threatened restoration art house cinema Film Forum with a lawsuit were they ever to showcase the movie, which he deemed an amateurish venture. Despite the fact that Fear and Desire was a public domain property, and the fact that Film Forum representative Bruce Goldstein recognized "definite talent" in the picture, the theater complied with Kubrick's self-deprecating wishes.

Steven Soderbergh Hated The Underneath

A particularly vocal presence on the Internet, Steven Soderbergh doesn’t have a lot of kind words about his seldom seen 1995 movie The Underneath. He's spoken proudly on the aesthetic of the picture, likewise of its score, but Soderbergh has lamented just about everything else in regards to the film. "Fifteen seconds in, I know we're in trouble," he told The Criterion Collection, adding, "It's just totally sleepy." Soderbergh even recalled feeling detached from the project during filming, knowing it would be "dead on arrival."

Lauded as among the greatest directors of all time, even Hitchcock was not exempt froam disappointing… at least in his own eyes. Many consider Rope to be one of his most enchantingly wicked pictures, but Hitchcock thought the bombast of the filmmaking got in the way of the story. According to Roger Ebert, Hitchcock called his picture, "an experiment that didn't work out."

This one’s a bit easier to understand. Almost nobody would go to bat for Lynch’s abomination of the sci-fi novel Dune, torn asunder by the whims of an ill-fit director and a studio hoping for something the story might never have been able to be. The otherwise intriguing Lynch is on everyone’s side with this one, recognizing it as a creative failure. With his usual cheeky deadpan countenance, Lynch calls the project "75 percent nightmare."

Today, Fincher is one of Hollywood’s most exciting mainstream directors, having turned out Zodiac, The Social Network, and Gone Girl in the past eight years alone. But Fincher kicked off his career with a movie he has taken far less pride in: Alien 3, which he actually abandoned mid-production due to scripting mayhem and other issues. More vehement in his vitriol than any other director on this list, perhaps, Fincher said of Alien 3 in 2009, "No one hated it more than me; to this day, no one hates it more than me."

Most interesting of the lot, perhaps, is the case of Woody Allen’s dismissal of Annie Hall . The 1977 Best Picture winner is lauded often as the greatest film in his half-century-long writing and directing career. But Allen wanted Annie Hall to be more than a love story, envisioning it originally as an existential quest that’d rope in fantasy, mystery, and more. While fans of the filmmaker might always be curious to see Allen’s ideal Annie Hall, the paring down of the film was probably the right way to go.