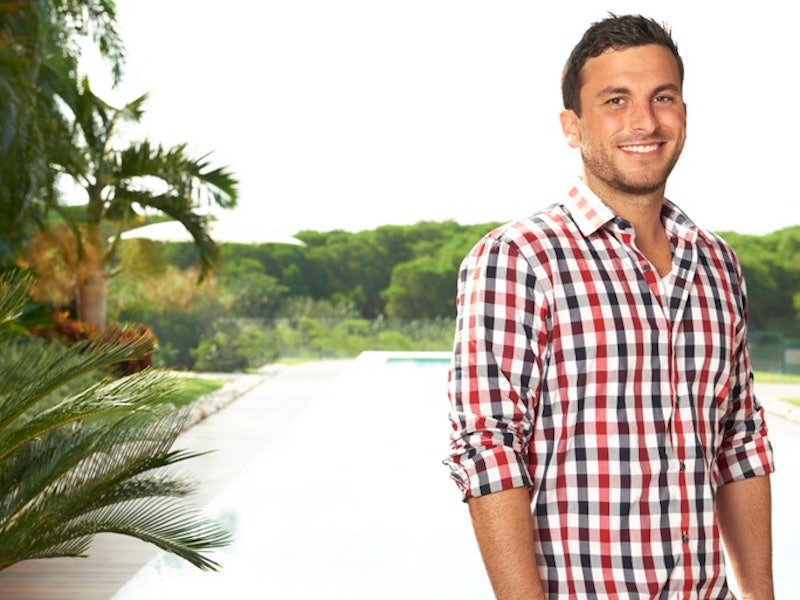 If you have been watching this season of ABC's Bachelor in Paradise, you may have already noticed that Tanner Tolbert is arguably the wittiest contestant the season — nay — the entire Bachelor franchise has ever seen. While certain contestants are drenching their sun-kissed complexions in a fountain of tears (no hate — it's ok to let it out, Ashley I.), brimming with agro contention that may lead to fisticuffs, or simply glaring at everyone like a character from Dexter (hi, Joe, on last night's episode), Tanner is firing off amazing one-liners and stealing our hearts. Tanner also delivered his masterful wit — and miraculously avoided the drama — during his turn as a lovable but oft overlooked contestant on Kaitlyn Bristowe's The Bachelorette.

Since getting the boot on Bachelorette, Tanner has entered the BiP fabric as this season's droll heartthrob. He and Jade Roper have already been shipped harder than Ross and Rachel since their adorable date, and I have no doubt a legion of fan fiction centered on the pairing is bound to ensure. Although Tanner is a star on reality television, there is a beguiling sitcom quality to his persona and anecdotes that keeps reminding me of someone. Who could it be?

That's right! Tanner is totally the Chandler Bing of BiP. In case you doubt that our favorite new reality heartthrob is basically the real-life version of the beloved Friends character, I have proof! Behold...

1. When Lauren I. Revealed Her "Mistress" Status, Tanner Was Like...

Scrolling through Tanner's Twitter feed has become my new favorite pastime. Seriously, guys, you are going to get your chuckle on so hard.

3. He's A Master At Self-Deprecation

Could he be any more like Chandler — television's reigning king of self-deprecation? I'm seriously two steps away from a Fight Club theory that these two are in fact the same exact person.

From the coquettish looks, to the compatibility, and adorable banter, these two definitely have potential as a couple worthy of '90s sitcoms.

5. Both Have The Smarts

Although it took us nearly the entire series to figure out what Chandler's job was (he worked in IT, in case you were still wondering), we always knew that Chandler was doing something that involved data, numbers, and anything people who got much better math grades than me do after entering the workforce. As it were, Tanner is a Finance Manager, so he clearly knows a lot about crunching numbers and showcasing his intelligence. I mean, really, anyone with that sharp of a wit has to have some serious smarts going on.

6. He Knows The Importance Of Friendship

If his time on television and social media activity is any indication of what it would be like to be friends with Tanner, the verdict is clearly that this guy would know how to "be there for you." Cue my fantasizing about dancing with Tanner and the rest of the BiP cast in a giant fountain.

They may not have the smooth operations of someone like Joey Tribbiani, but I, for one, find adorable awkwardness and bashful wit way more endearing. Remember when Tanner read a poem to Kaitlyn on Bachelorette reminding her of his name and whatnot in case she had forgotten? Be still my heart.