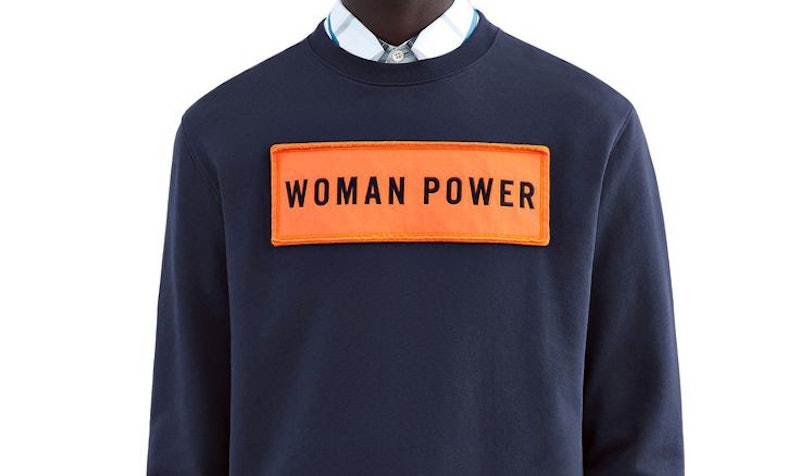 Feminist fashion is becoming quite the trend these days, and we're not mad about it. Designers have been taking a stand for gender equality for a while now (remember Chanel's feminist rally/runway show last fall?) and Acne Studios is one of the latest to join the movement. Acne just released a line of feminist-friendly clothes for both genders, so everyone can show their support of equality in the form of a pricey sweatshirt.

Acne Studios' new fall menswear line features a variety of men's pieces (although they boast that the items are unisex—how feminist of them) emblazoned with feminist and gender equality phrases, so if you want a smart sweatshirt that says "woman power" or a scarf that says "radical feminist," Acne has you covered. It even goes to support gender fluidity with a men's sweatshirt that says "please call me girl." Unfortunately, these pro-feminism Acne goods don't come cheap. One scarf costs $220, which is pretty hard to rationalize, even though the message is nice.

More like this
I Tried Kendall Jenner's No-Pants Look As A Plus-Size Woman
By Sarah Chiwaya
All Of 2023's Biggest Nail Art Trends, According To Top Manicurists
By Jordan Murray
'Love Island's Will Got A Farm Animal Manicure & It's *Adorable*
By Sam Ramsden
8 Bennifer Outfits That Stand The Test Of Time
By Avery Matera
Get Even More From Bustle — Sign Up For The Newsletter
From hair trends to relationship advice, our daily newsletter has everything you need to sound like a person who’s on TikTok, even if you aren’t.