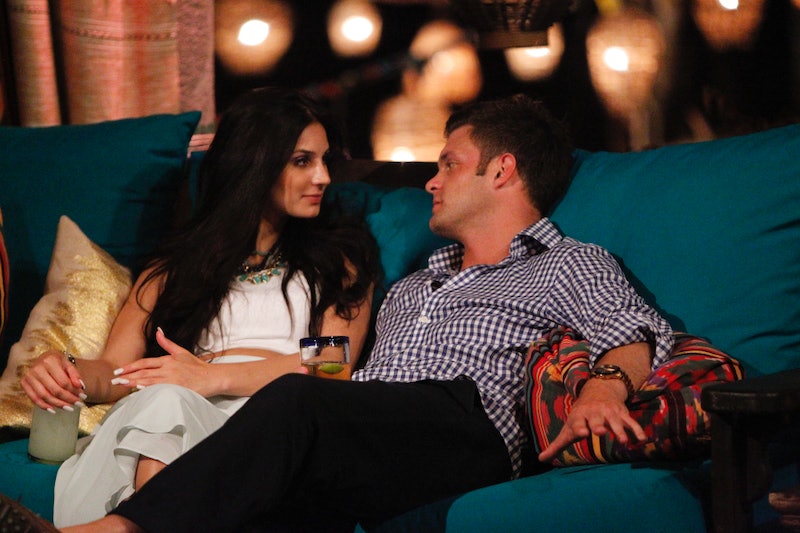 I couldn't imagine being the villain of a reality show and not knowing that I was until I watched the footage. But, I imagine that's how Bachelor in Paradise star Samantha Steffen must feel when she watches these scenes of her and and the notorious "rose before bros" BiP jerk. Now, there's some debate that Sam and Joe actually plotted to get on BiP together by any means necessary (for Joe that meant playing Juelia), but whether she had pure intentions in going after her main man or not, she is in a very different place now. In fact, judging by her social media, Samantha is not a fan of Joe now that Bachelor in Paradise has ended.

Perhaps she's just trying to save face and not look like an equal jerk, but I'm pretty certain that just as Juelia and Sam are no longer friends, Sam and Joe are probably no longer dating. In fact, I don't even think she likes him just as a person anymore. Her tweets are pretty barbed, and she's not afraid to share her opinion on the man that became the BiP bad guy faster than you can say, "Villains gotta vill."

Since her debut on the show Sunday night, the newest BiP lady-villain has been tweeting up a storm about Joe. Here's what she thinks of the man she once dated in Mexico.

She Apologized For Her Hot Tub Makeout

Guys, she doesn't even know if Joe has a penis, so how close could they possibly have been?

She Rhymed About Their Impending Doom

When you diss a guy via poetry, you're probably over him.

She Declared Hindsight Could Have Saved Her

She Insinuated Joe Kinda Brainwashed Her

These words + the crying emoji makes me think she definitely doesn't like Joe any more.

She Retweeted Others' Negative Comments

Yep, girl hates him as much as we do. It just took her a little longer to figure that out.