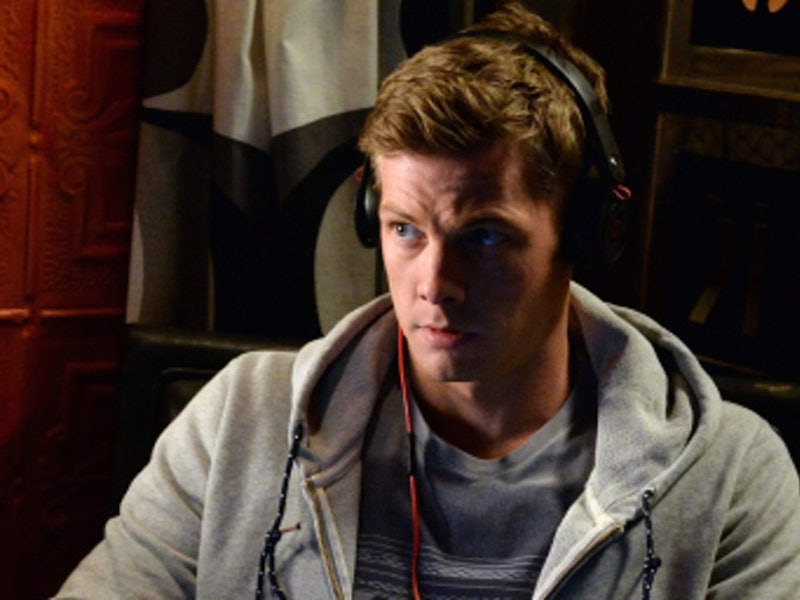 Season 6A may have been referred to as the "Summer of Answers," but there are still several questions the Pretty Little Liars finale neglected to answer — one of which involves the identity of Rosewood's latest Big Bad. Of course, I'm referring to the mysterious "he" from the PLL time jump, who (big surprise) is Alison's latest obsessor. (Seriously, if I had a nickel for every time this girl gets a new stalker, I'd be as rich as A.) So who is this guy and why is he coming after Alison? In classic PLL fashion, we're left with very little details to go on, which means he could practically be anyone. That being said, I have a sneaking suspicion that the "he" in question might be none other than Andrew Campbell.

You see, here's the thing — I have a hard time believing that a character is ever introduced for little or no reason, especially in regards to this show. Throughout the second half of Season 5, Andrew was doing all sorts of shady things, starting with how he pretty much implied to Aria that the world was a better place without Mona. (This was back when we all thought she was still dead.) That's pretty harsh considering Mona never really even did anything to him (that we know of) and implies that there's a much darker side to him than meets the eye. And let's not forget the time he hacked into Veronica Hastings' phone. (Can you say creepy?) But in the end, he managed to walk away completely innocent. Something does not add up here.

Monitoring other people's phone calls is not typical teenage-boy behavior. It's more like A behavior. And while we now know that A is actually CeCe, that doesn't mean she's the only person in Rosewood who's officially off their rocker. (Looking at you, Sara Harvey!) Speaking of Sara, it was never fully explained why she was helping CeCe wreak havoc on the Liars or what happened to her after Emily gave her a well-deserved punch to the face in the finale. Before heading off to college, Emily mentioned that Sara was getting out of the hospital. And while it's unclear what exactly happened to put her there, the girls avidly tried to assure themselves that "What happened to her wasn't our fault."

Sounds pretty ominous, right? Well, according to I. Marlene King, it's a mystery that will be further explored when the show returns. "Something happened to Sara Harvey that we're going to find out about when we come back," she told The Hollywood Reporter. "She's a little bit of a mysterious character in our world, and it's going to be fun to watch that play out."

So where does Andrew fit into all of this? I think it's possible that Andrew and Sara are connected in some way, which would help to explain all of their bizarro actions. Perhaps they were both really good friends or related in some way, which means Sara's hospitalization could've sent Andrew on the fast track to revenge-ville. And since that night so heavily centered around Ali, he may now associate her the most with whatever happened, thereby making her his No. 1 target.

King recently teased to TVLine that "'He' is not Charlotte or CeCe or anyone related to that particular name. It’s a different person the girls are coming to warn Alison about." So I think it's safe to rule out any member of the DiLaurentis family. King also revealed to Entertainment Weekly that "He" represents "some connection to the past. Not a mystery revolving around the past, but a connection to the past."

That kinda makes it sound like we may already know this person in some capacity, don't you think? So going on the assumption that "he" is actually a "he" this time, that narrows down our list of suspects substantially. And given the devious antics we've witnessed from Andrew in the past — and the fact that the DiLaurentis kids (CeCe included) went apple picking at the Campbell Farm — it's highly possible he'll turn out to be our mystery man. Whether he's doing it on behalf of Sara or some other outside motivation has yet to be seen. Either way, though, I have a feeling Andrew's story may have only just begun.