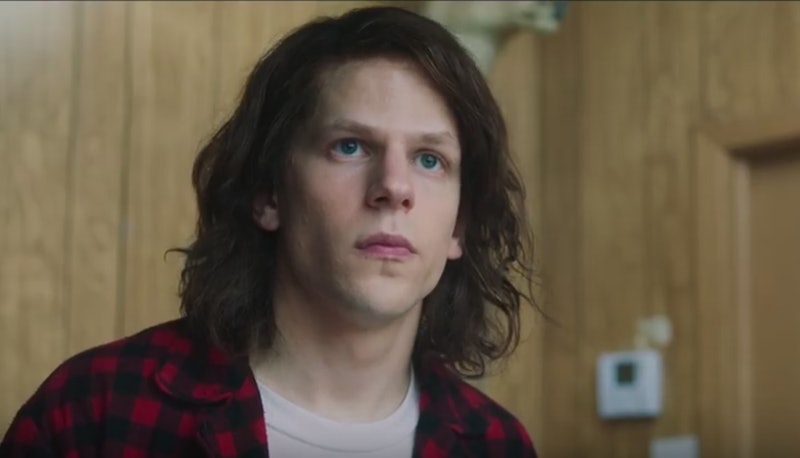 How to play a stoner in an action/comedy/romance? Step one: have great hair. At least, that was Jesse Eisenberg's thinking when he took on the role of stoner/sleeper CIA agent Mike in American Ultra. The genre-busting blockbuster comes out on Friday, and features Eisenberg rocking what can only be described as a knotted mop of shoulder-length hair, causing many to wonder, is Jesse Eisenberg wearing a wig in Ultra? If you guessed 'yes,' you'd be correct. In fact, Eisenberg has said that he felt strongly that his character should have long, unkempt hair.

Eisenberg spoke about his desire to wear a wig for the role in a joint Screenrant interview with co-star Kristen Stewart:

"I wanted just to wear longer hair, like a wig, just because the character is somebody who...would not have gotten a haircut in several years. He is somebody who has kind of just immersed himself in nothing, in his own laziness, and enjoying his own laziness. So I thought he would have not gotten a haircut. He wouldn't groom himself in any kind of consistent way. It gives it a better kind of turn for when he has to defend himself. So this is a guy who couldn't be less prepared to do this."

Eisenberg wasn't the only one who created a character with his hair. Stewart dyed her hair a burnt orange for the role, making her appear similarly disheveled and carefree. "We're very directionless. We don't really have...there's nothing very defining about our looks. Everything is very haphazard, and comfortable, and practical. And we're just like stoners, essentially," Stewart said in the interview.

American Ultra director Nima Nourizadeh agreed that the wig helped complete Eisenberg's super stoner alter-ego, saying to MTV, "As soon as that wig's on his head you just had a much more slower, low-key vibe about him."

Paul Rudd slapped on a wig and grew a bushy beard to play a kindhearted stoner in Our Idiot Brother (2011).

And, finally, Adam Brody wore whatever the hell this is to play 'Steve the Dealer' in Smiley Face (2007).

(And, OK, yes, I'm pretty sure his hair was terrible on purpose, but still. I think we can all agree, Rudd's wig is the best in the bunch.)

So, as far as wigs go, Eisenberg's American Ultra stoner wig might not be the best work we've ever seen, but it certainly is not the worst. In fact, compared to the god-awful wig sitting on Eisenberg's head in the latest Batman v Superman : Dawn of Justice trailer, it's downright glorious. Just take a look and try to tell me you don't think Eisenberg's Lex Luthor wig is more terrible than terrible.