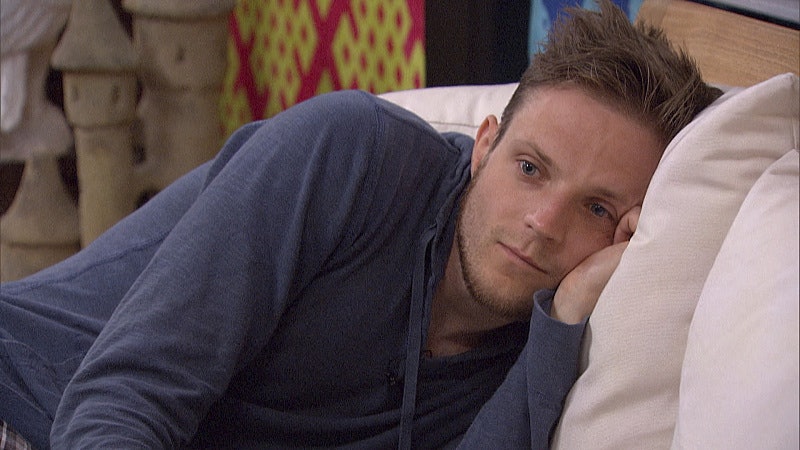 John and Becky, sitting in a tree. K-I-S-S-I-N-G. Except, in the Big Brother house, John and Becky are sitting on the block, ready for eviction, and they’re definitely not K-I-S-S-I-N-G. But, of course, that doesn’t mean they won’t! The two houseguests have had a flirtatious relationship since the beginning of the season, and with both of them one day away from potentially going home, I have to wonder if they’re going to go for it already and finally kiss before Thursday night’s eviction.

Here’s what we do know: John and Becky have been flirting like crazy. But, the two of them have very different ideas of what that flirtation means. Playing board games and cutesy games of pool with each other might suggest that there is something going on, but don’t count your showmance chickens before they’ve hatched.

Because, don't forget: Becky said much earlier in the summer that she doesn’t see her relationship with John as flirtatious, and that she gets frustrated when people suggest that something more is going on. Which might just mean what John and Becky fans don’t want to yet admit to themselves: She’s just not that into him.

As for John, he clearly sees their relationship as having far more potential than Becky does. (And we know how much being on two separate pages is good for a burgeoning relationship!) In a brief exchange with Steve, John made a vow to “go for it” with Becky once they were out of the Big Brother house. He swore he would make a move on her once they were both in the Jury House, but not a minute before then.

Why? Because showmances can seriously screw up a houseguest’s game. Just look at what it did to Clay and Shelli — aligning yourself so completely with one houseguest makes everyone else super suspicious of your intentions, and just how trustworthy you can be. Whether you make it to the end or to the jury house, if everyone else knows that you’re in a relationship with someone else in the house, that is undoubtedly going to taint the way they play the game with you. This means showmances are a disaster for most players in the game.

Well, that and being manipulative and super aggressive in their gaming.

Still! John definitely knows better than to make any moves on Becky while he’s still in the house. Couple that with Becky’s insistence that she hasn’t been flirting with him and never will, and you have yourself a surefire way for neither of these houseguests to get kissed during this series. Sorry to be the bearer of nomance news.