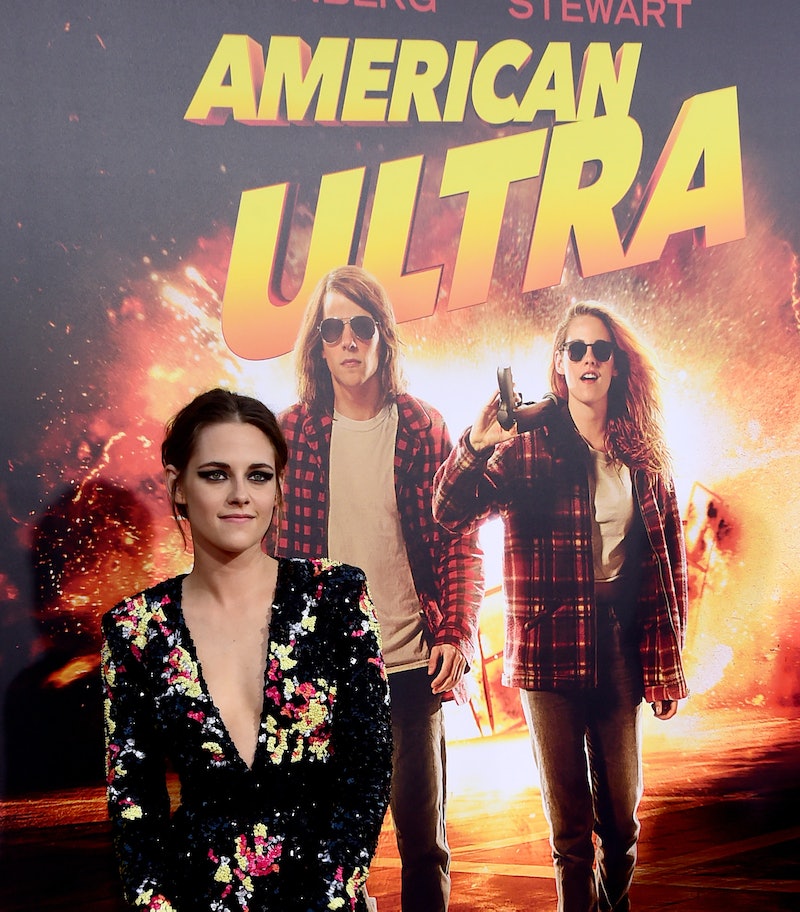 If you've seen the trailers for American Ultra, then you know that the film's main action scenes involve a stoner Jesse Eisenberg kicking ass and taking names, all while trying to rescue his girlfriend (Kristen Stewart) from CIA bad guys. But what about Stewart's character, Phoebe? Well, it turns out, she's pretty impressive, too. As Phoebe, Stewart doesn't get to display the same super spy fighting skills Eisenberg gets to show off, and she does (spoiler alert) get captured by evil CIA at one point in the film. But, as with many of the actress' past characters, Phoebe is a lot more than just a damsel in distress — In American Ultra , Kristen Stewart fights in her fair share of scenes, and kicks some serious butt.

In an interview with Today, Stewart described Phoebe as being in control of her own destiny, even when she's captured by the bad guys. However, the actress admitted she wished she could have done a little bit more action. "I love getting physical with stuff. I mean, he got to do a lot more than I did...I wish I got to do a little bit more fighting, but I have like 30 seconds in which I prove myself. My elbows prove to be, like, useful," she said.

She's not exaggerating; as seen in the trailers for American Ultra , Phoebe gets to throw a few punches and use a gun to defend herself in the film.

When she's not punching bad guys, Phoebe isn't afraid to sacrifice for those she loves, a trait Stewart said she finds admirable. "It's really cool to see somebody accept compromise so willingly because of a selfless human connection. Which, ultimately is selfish, because that's what you want. But it's just lovely to see someone give something up. It's why I wanted to do Twilight," the actress told Esquire.

It's really no surprise that Stewart's character in American Ultra doesn't sit on the sidelines. Stewart has a habit of putting a twist on traditionally vulnerable characters. Over the course of the Twilight Saga, Stewart went from playing Bella the young, naive teenager to Bella the confident and strong vampire. (I still maintain that Bella is a horrible role model for young girls, but, you do you.)

Perhaps the most obvious example of Stewart's knack for transforming damsels in distress to women in charge is her role in Snow White and the Huntsman. As the titular Snow White, Stewart embraced the princess stereotype — the skin as white as snow, lips as red as blood, etc. — while also getting to break free from it by being a badass warrior who ties her hair in a ponytail for battle like a real person. Seriously, when are we gonna get rid of that stupid rule that women who fight must always have their hair flying everywhere? It's ridiculous.

Hell, Stewart is so awesome, she could probably kill you with her imagination alone — you know what you did.

Bottom line: Stewart could probably take you in a fight, so, I'd think twice before dismissing her as a damsel in distress in American Ultra.