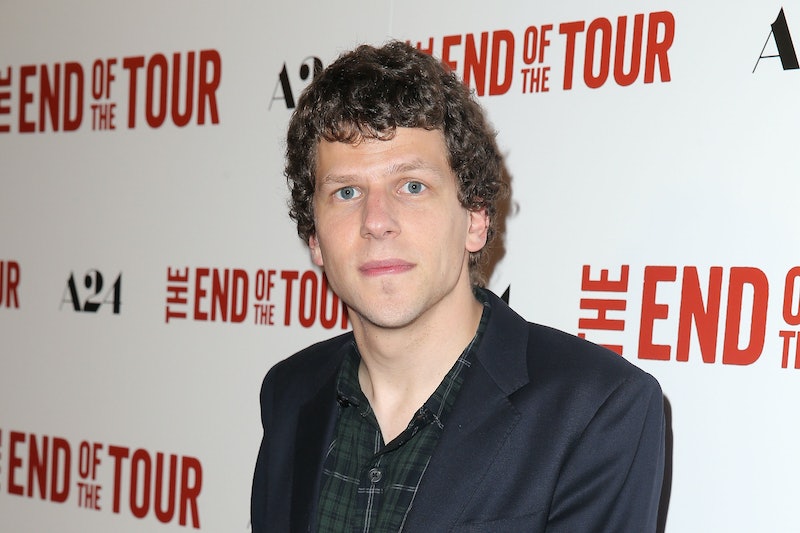 Jesse Eisenberg stars as a stoner who happens to be a CIA-trained assassin in American Ultra , and, strangely, it's not his most unbelievable upcoming role. After this summer's American Ultra, the next Jesse Eisenberg movies are all big projects, and all require some serious performances. In the next year or two, the actor will star as a crazy, megalomaniac villain; a sarcastic magician/con artist; and what I can only assume will be a version of Woody Allen.

Full disclosure: I love Jesse Eisenberg. He's a total weirdo — Kristen Stewart's word, not mine — but I love him. I can't help it, which probably explains why I'm excited to see him as Lex Luthor in Batman v Superman: Dawn of Justice, even though I hated Man of Steel with a passion that can only be compared to...well, Eisenberg's hatred of being famous. He once said that he's happiest rehearsing a play, telling The Guardian, "I wish we didn't then have to show it to an audience but I understand an audience has to be there in order for the play to survive."

Despite his distaste for fame, Eisenberg has had an enviable career. At only 3, he has been nominated for an Oscar (for his incredible performance as Mark Zuckerberg in The Social Network), guest-starred in an episode of Modern Family, voiced a popular animated bird in Rio and Rio 2, and has a successful career as a playwright. His most recent play, The Spoils , earned rave reviews this summer. Finally, the actor/writer/comedian also has a book coming out in September, a collection of short stories titled Bream Gives Me Hiccups: and Other Stories.

2016 is going to be a big year for Eisenberg, with Batman vs. Superman set to hit theaters on March 25. Most of the plot details concerning Lex Luthor are being kept under wraps, but don't expect Eisenberg's Luthor to be as bombastic as Kevin Spacey's take on the character in 2006's Superman Returns. "There's an emotional core to the character. It's not a silly, villainous character," Eisenberg told MTV News, adding that Luthor's evil is "coming from a place probably diagnosable in some way."

After Batman v Superman, Eisenberg will switch gears, reprising his more comedic role of J. Daniel Atlas, the smartass magician of 2013's magic thriller Now You See Me, in Now You See Me: The Second Act, the sequel. Also in 2016, fans can expect to see Eisenberg star in his second Woody Allen film — the "Untitled Woody Allen Project" — that will also feature Eisenberg's American Ultra co-star Kristen Stewart, as well as other actors Blake Lively, Corey Stoll and Anna Camp. Little is known about the film, but with Eisenberg's adorkable personality, dry humor and general, fast-talking awkwardness, it's safe to assume he'll play the staple 'Woody Allen' character that appears in every single Woody Allen film.

Eisenberg is a tricky actor to figure out. Unlike other young talents, he doesn't seem concerned with securing a place in pop culture — he doesn't want to be a heartthrob or a studio puppet — but he also doesn't shy away from starring in a major studio movie, like Batman vs. Superman. He'll star in stoner comedies like 30 Minutes or Less and American Ultra in between indie films Night Moves and the recently released The End of the Tour . If there's one thing that can be said about what the future looks like for Eisenberg, it's that whatever comes next, you probably won't be able to see it coming.