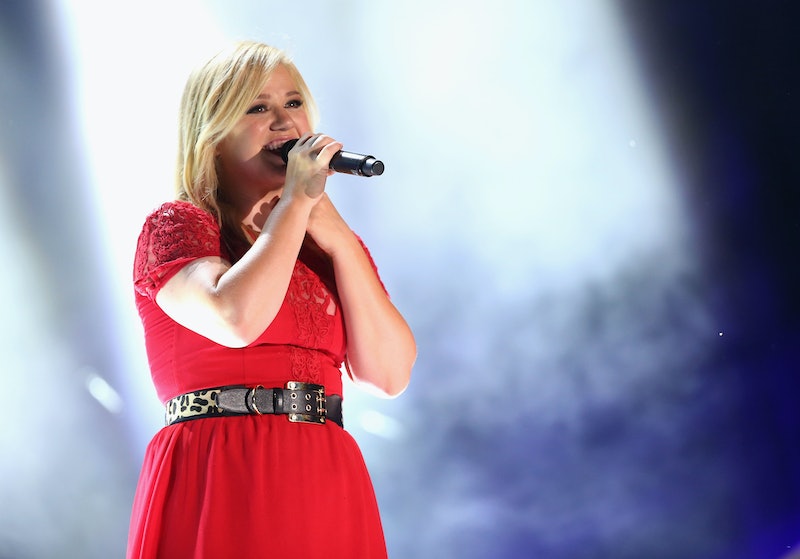 Kelly Clarkson's had an extremely busy couple of the months that also happened to included staging one of the best Christmas cards we've seen in a long time, apparently. Two months ago Clarkson married Brandon Blackstock, after a short nine-month engagement, in a secret ceremony at a resort in Tennessee. Just a few short weeks after the couple tied the knot, the "Since U Been Gone" singer revealed on Twitter that she'd gotten her Christmas wish — she's pregnant! Oh, and in addition to those two life events (as if they weren't enough), Clarkson released her new Christmas album Wrapped In Red and is set to headline the star-studded NBC holiday special Kelly Clarkson's Cautionary Christmas Music Tale airing Wednesday at 10 p.m.

The past few holiday seasons have been dominated by the ever-glamorous, annual Kardashian Christmas cards, but after this year's flop and seeing the Blackstock family card, there might be a new family to follow with anticipation.

Clarkson debuted the card which features not only Blackstock and his two children from a previous marriage but the new family's two dogs in a creative and funny staging that we wish our parents had thought of when we were kids. Move over, Kris Jenner, this American Idol alum killed it in the 2013 Christmas Card game and you might have some competition.

This is AMAZING and here are five reasons why:

Christmas cards featuring pajamas are wildly underrated so I'm thankful that Clarkson (and my own mother for countless years) chose to put the whole family in pajamas while staging this pic. The key to making it work — not matching. Having the whole family in the same print/pajamas is nerdy but mixing prints is not. We approve, girl.

ALWAYS and I mean ALWAYS put your pets in your holiday card. Pets are adorable whether they cooperate or not (and sometimes it works when they don't, see above). Thus, they are guaranteed to make your card a hit with everyone on your mailing list.

Take note, Kardashians, this works. We know Clarkson's card is a holiday card — she's got Santa, decorations, the appropriate amount of red, green and white. Simplicity rules (hence our love for the pajamas). We know exactly why you're sending us this card and we love it.

"YES, YES, YES!" — My first reaction to seeing the entire family giving Santa the Stink Eye. The Stink Eye is pretty much on the same level as including pets — it always works. Always. Hopefully we see an uprising of photos featuring the Stink Eye now that Clarkson's broken that barrier for eye. Engagement Stink Eye photos? Stink Eye photos with the Easter Bunny? We're into it.

Seriously, why so serious, everyone? The best Christmas cards are the ones that are taken outside of the terribly lit photo studios of JCPenney. (Thankfully, my mom, too, realized that after a few short years.) Santa tied up your entire family in a gigantic, red Christmas ribbon and is forcing you to watch him chow down on cookies and milk? Hilarious. Hopefully this photo will save future generations of children from being forced to sit with their hands crossed in their lap while a photographer shakes a purple, stuffed pig over his camera to keep their attention.

More like this
22 Movies On Netflix That Are Perfect For The Whole Family
By Bustle Editors
An Ultimate Guide To The Music Of 'Rap Sh!t'
By Brad Witter
What Is Ben Affleck's Net Worth? At 50, The Oscar Winner Makes 8 Figures Per Film
By Meg Walters
What Is Megan Thee Stallion’s Net Worth? The Traumazine Hitmaker Isn’t Worried About A Budget
By Hugh McIntyre
Get Even More From Bustle — Sign Up For The Newsletter