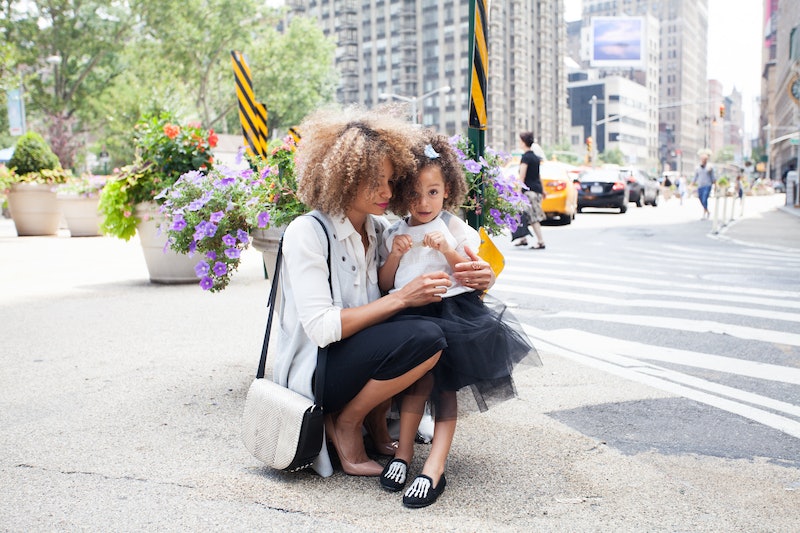 As the fastest growing segment of the United States population, mixed race individuals are speaking louder than ever before about their experiences in a predominantly monoracial society. The annual festival called Mixed Remixed that took place in June in Los Angeles was a space for individuals from multiple cultures to share their stories and learn more about American multiculturalism. We need to see more of this kind of dialogue, surely, but there’s a piece of the puzzle we’re not hearing too much about — what life was like growing up in a multicultural home back when it wasn’t so common.

While the terms "multiracial" and "multicultural" might seem interchangeable, there is a difference. Race refers to a bloodline or genetic pool that refers to a specific historical process, but that doesn't necessarily mean a person who is racially Japanese and Brazilian grew up amongst both of these cultures' particulars, such as language and food. Then there are those kids who grow up in homes full of contrasting cultures, and whether or not they are genetically tied to all of them isn't that important, because that's the only life they ever knew.

When I was a kid, I was the only one in my whole town who had parents from different cultural (and racial) backgrounds. My experience at home was very different than my peers’; that’s not to say my childhood was more or less exciting or interesting than anyone else’s — but it was just unique. Since I left the nest and started meeting people from all over the world, I’ve met many other multicultural people who truly understand the daily oddities, in the period of our history when it was peculiar to see an interracial mother and father taking their kid to soccer practice.

Here are nine things you'll probably get if you grew up in a multicultural household as well.

1. Your Parents Sometimes Got Angry In A Language You Couldn’t Speak

A lot of multicultural homes have two or more languages floating around, and the kids don’t always speak them all. There are moments when a mom will revert back to her native language, especially if they’re scolding their daughter for something, and then there are times when both parents choose to speak to each other in the language the children can’t understand for the sake of privacy. This used to happen when my mom and dad were arguing about finances or whether to extend my curfew, and I'd (unsuccessfully) press my ear against their door to try to decipher through the muffled Korean.

When my parents had a long day at work and weren't feeling like starting a meal from scratch, the dining room table turned into a brilliant smorgasbord of mixed cuisine. There was authentic Italian food, like homemade meatballs and garlic broccoli rabe, right next to big bows of kimchi and soondubu jigae , a tofu soup with Korean chili paste and vegetables. Those were my favorite dinners, so weird and wonderful and satisfying, and I'm sure I'm not the only multiracial kid who was lucky enough to experience them. It's one of the things I miss most since I've kissed childhood goodbye.

3. Your Family Reunions Were Sometimes Awkward

Its not the norm for both sides of mixed race families to meet for the holidays or a special occasion, but mine did on several times — and the majority of them were cringe worthy. I can giggle at the interactions now, years later; back then, however, it was tough to stomach. There was the traditional Korean side that drinks Soju, chain smokes, and isn't well-versed in physical affection. Then there were the Italians — loud, hugging, overeating lovebugs who prefer Cabernet Sauvignon. Not exactly a peanut butter and jelly kind of match, you know? Still, it is a beautiful thing to see families trying in their own ways to show warmth and support to one another.

4. People Might Have Asked If Your Dad Was In The Military

I laughed my head off when, on an old episode of The Office, Steve Carrell asked ethnically ambiguous Rashida Jones, "So was your dad a GI?" Even though it was totally socially unacceptable, it was funny because it was so accurately portrayed. I wish I had a nickel for every time strangers and friends alike asked me if my dad used to be in the military, as if that was the only way for interracial couples to meet back then. For future reference, avoid asking this of multiracial folks, because a lot of us, especially those of us with Asian blood in our veins, aren't stoked to hear it.

5. Friends Were Sometimes Weirded Out When They Visited Your House

When I first started having girlfriends over for sleepovers, I could see they felt like a fish out of water upon stepping foot into my house. It's not that we had anything abnormal thing going on — it just wasn't like the all-American homes they're used to.

There was unusual food cooking on the stove and channels in a foreign language humming in the background. Often, the kids didn't know how to handle it, so they just paused at the front door, looking puzzled. A Chinese friend of mine in college told me a story about how a white girl from her science class came over to do homework one day and was so freaked out by the fish head that was being sautéed, that she went running for the hills.

6. Teachers Have Thought Your Parent Was Someone Else's

For as long as I can remember, I have been the spitting image of my mother. This has left many people confused about who my dad actually is because, at first glance, we don't look much alike (until you take a closer look at our giant matching chins). At the start of every school year at open house, my new teacher would introduce herself to my father and ask which student belonged to him — even though I was standing right next to him. My biracial friends have also experienced similar situations, and we love to trade stories about how uncomfortable, yet slightly amusing, it used to be.

7. People Were Often Convinced You Weren't Related To Your Sibling

It's not uncommon for siblings in a multiracial family to look different from one another — some might be lighter skinned while their brother possesses darker features.

Coming back to biracial Rashida Jones (have you picked up on my crush yet?), she and her sister Kidada were interviewed by Glamour magazine in 2005; they spoke frankly about how difficult it was growing up because their physical features weren't very similar. They also led contrasting social lives and outsiders expressed shock when they revealed they were sisters; it was hurtful for them, as I'm sure it is for the many other siblings out there who are at the receiving end of similar comments.

8. You Might Have Been Sent To School With Lunches Kids Made Fun Of

Picture the leftover dinners that took place at my house — but this time, at the crowded, merciless cafeteria. My brown paper bag was usually stuffed with zany concoctions that reflected the multiculturalism that surrounded me; there was godunguh, Korean mackerel fish, alongside day-old spicy sausage. Instead of finding it to be cool, though, the kids at school only teased me, kind of like little Toula in My Big Fat Greek Wedding , whose homemade lunch was compared to a moose's bowel movements.

9. You Probably Felt Left Out Amongst Your Cousins

As a multiracial kid, you probably don't closely resemble your single-race cousins, making it difficult to blend in when you see everyone for the big Fourth of July bash. I often struggled with this on my Korean side of the family because they all spoke the language, and I was the only one who wasn't raised in a traditional Korean household. Then, when I was with my Italian cousins, they only saw my appearance — an Asian girl. It was a grueling gig, switching back and forth between the two cultures and trying my best to fit in.

This narrative is shared among many biracial children out there, as we all learn to navigate between two or more cultures.