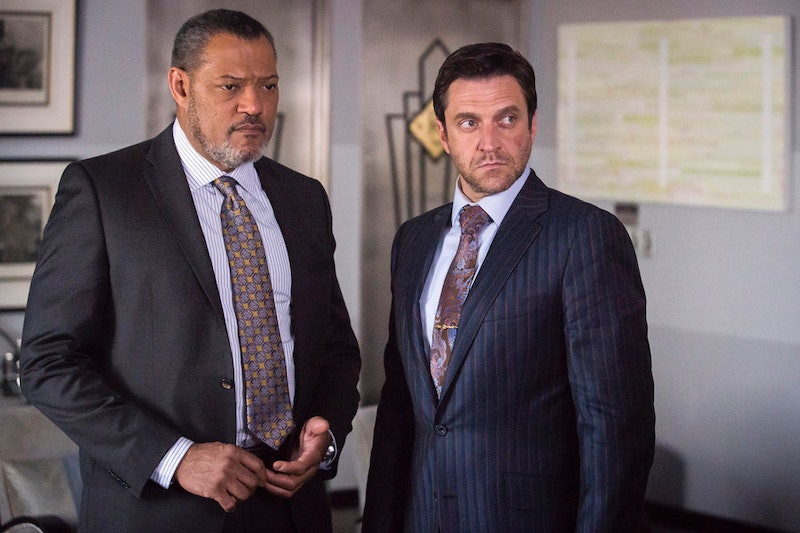 Poor Fred. One week to go before NBC's critically acclaimed serial killer drama airs its series finale (*sobbing*), and the Red Dragon is very, very angry. Creator and showrunner Bryan Fuller promised viewers that Season 3 of Hannibal would be a bloody one, and he's fulfilling that promise in the show's home stretch. Those who have read Thomas Harris's 1981 novel Red Dragon — or seen either of its feature film adaptation — likely new something awful was coming in this Saturday's episode, "The Number Of The Beast Is 666"... but Fuller threw us a major curveball. Franics Dolarhyde's victim wasn't tabloid journalist Freddie Lounds, like it was in the book; but rather Dr. Fredrick Chilton.

The former head of the Baltimore State Hospital for the Criminally Insane — who relinquished that title to Alana Bloom in favor of becoming a bestselling author — has had a rough go of it on this show. In Season 1, he was kidnapped by Abel Gideon and had all of his internal organs removed. (They were put back safely, of course.) In Season 2, he was shot in the face by a brainwashed Miriam Lass. (The bullet just missed his brain, of course.) So we all should have known that something terrible was in store for the character in Season 3; but it was still a shock to see him abducted by the Red Dragon in Freddie's stead.

The beginning of the episode seemed to be going according to plan: Will Graham and Jack Crawford recruited Freddie Lounds to right an article slandering the "Tooth Fairy" in order to enrage him and lure him out of hiding. However, things took a turn when they also recruited Dr. Chilton — fearing the trap would be too obvious if it was just Will, they had the doctor join in on the slandering to give it some semblance of legitimacy. Unfortunately, that meant Dolarhyde's crosshairs ended up landing on the wrong target.

From there, everything that befell Lounds in the book happened to Chilton instead: he was forced to behold the glory of the Great Red Dragon; he was coerced into reading a testimony to the killer's power; he had his lips bitten off by Dolarhyde's jagged dentures; and he was set aflame while superglued to a wheelchair. (In Fuller's Hannibal universe, this was a direct homage on the Dragon's part to how Will faked Freddie Lounds' death to entrap Dr. Lecter last season.)

So did the good doctor finally shuffle off his mortal coil after so many brushes with the grim reaper? Not quite! The good doctor survived his fiery ordeal and wound up in the hospital looking like nothing so much as a toothy, overcooked spare rib. But don't celebrate too soon, Chilton fans. In the book, Freddy also survives long enough to give Will & Co. valuable information on finding the Tooth Fairy... and then promptly succumbs to his injuries. So we could still see a death scene for Chilton next week. Then again, he has survived so much so far that I'm starting to think he might actually be immortal.

Oh, and in case the sight of a major character on fire sans lips wasn't enough for his viewers, Fuller also threw a major bone to those hardcore Will & Hannibal 'shippers amongst his Fannibals. In the night's opening scene, Will asked Dr. Du Maurier point blank: "Is Hannibal in love with me?" Bedelia's answer: "Could he daily feel a stab of hunger for you? And find nourishment at the very sight of you? Yes." (tl;dr, of course he is!)

How will the bromance between Will Graham and Dr. Lecter end? We'll find out next Saturday in the series finale of Hannibal.