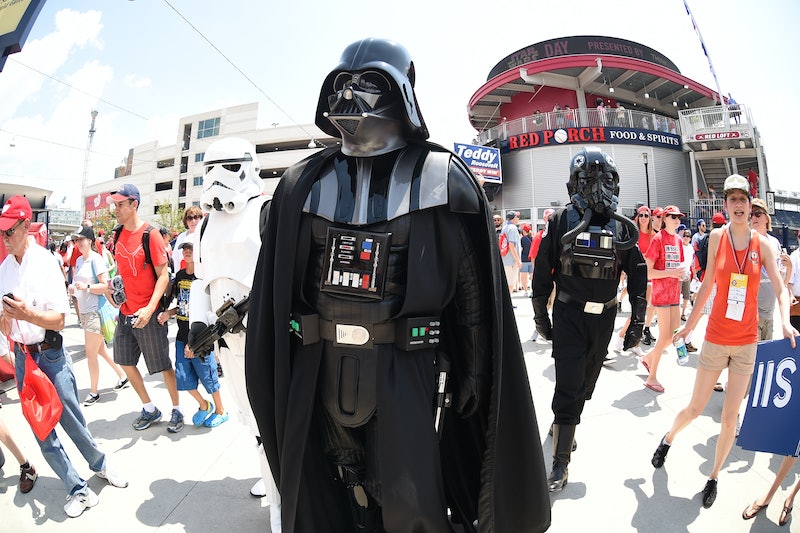 There are Star Wars fans, and then there are Star Wars Fans-with-a-capital-F. While they're not exactly ignored in pop culture — in fact, they're one of the most visible and catered-to groups in Hollywood — they have once again made their voices heard. Thanks to these ultimate devotees of George Lucas, Anakin has become a popular baby name in America. Does that mean American parents are totally cool with their children becoming crazed, genocidal leaders of the Dark Side who betray Ewan McGregor and are ultimately slain by their own progeny? Yes. Yes, it does.

As you've no doubt discovered for yourself, the Social Security Administration recently released data on the most popular baby names in 2014, and websites all over the Internet (including Bustle, of course) have been going a little crazy pointing out parents' interesting judgment. When I say interesting judgment, by the way, I mean it — the Independent's list of terrible baby names in 2014 included names like Zeppelin, Savvv, Kindle, and Sham. Someone even named their child Alias, which will no doubt make for a life filled with confusing introductions.

Is it any surprise that research indicates baby names are becoming increasingly unique? Despite what you'd think, though, naming your child Anakin isn't that uncommon. As Mashable points out, 218 children born last year were named after the famed Sith Lord, making it the 957th most popular name of 2014. Dare I say we... underestimated Anakin's power?

If you think that's the extent of America's nerdiness, though, you're in for quite the surprise. A perusal of the Social Security Administration's data shows that kindergarten teachers had better start catching up on their nerd culture, stat. Don't believe me? Just look at these particularly nerdy baby names from 2014.

More like this
When Did Tamagotchi Come Out? In The U.S., 25 Years Ago
By Kaitlyn Wylde
How To Use The Crying Filter On Snapchat, TikTok, Instagram & More
By Emma Carey
The True Meaning Behind Each Hand Emoji
By Bustle Editors and Emma Carey
TikTok’s “5-9 Routine” Trend Is Here To Boost Your Productivity
By Courtney Young
Get Even More From Bustle — Sign Up For The Newsletter