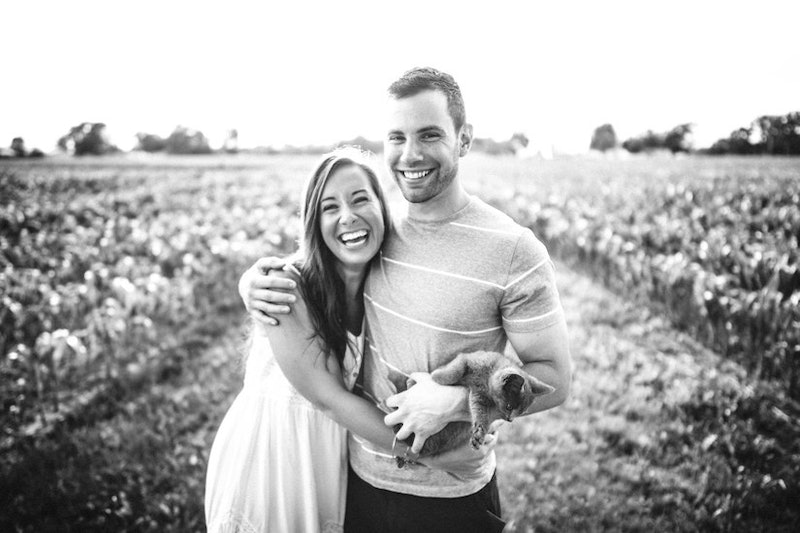 Do you finish each other’s sentences? Do you get along with their family? Are they the ultimate pizza and Netflix companion? If you’ve answered yes to these questions, that still doesn’t mean you're ready to move in with your significant other. Living together may seem like the obvious next step in the relationship, but it's important to determine what step you're actually both standing on before you move forward.

According to a survey conducted by Rent.com, 37 percent of users agreed that six months to a year into dating is a good time to move in together. But of course, every situation is different. It's important to assess your own relationship honestly and, most importantly, identify why you want to take this next step. Dating strategist Damona Hoffman told the Huffington Post that one of the things to consider is whether this is a step toward marriage or a coupling of convenience. Whichever it may be, your relationship dynamic is going to change and you'd best be ready.

Living with your significant other will unfold a whole stream of surprises that wouldn't have even crossed your mind before. As badly as you may want the move to happen, and as ready as you may be to jump in with everything to offer, you may not be in a place to do so. Or vice versa. So when having that conversation and making that decision, here are some things to keep in mind and discuss with your partner.

This is the most straightforward and practical of all the signs. It may sound superficial and shallow because yeah, love overcomes a lot of things. But if you're on the same page financially, things will be easier all around. One of the first arguments that begin those nasty rifts in relationships unfortunately circle around money, according to The Wall Street Journal. James Cordova, a psychology professor at Clark University in Worcester, Massachusetts, told U.S. News that it's not so much the math that couples argue over, but what the money means emotionally.

If one person is significantly more self-sufficient than the other, this could introduce a lot of new problems. A Baylor University study published in the Journal of Social and Clinical Psychology found that the most common thing couples want from each other is the willingness to relinquish power. One person may begin to feel undermined, or the other overwhelmed. Spending money and dividing things equally becomes more complicated. According to Psychology Today, people tend to fall into two different "money personalities" — the saver and the spender. So talk it out and lay out all of the things that matter most to you on the table. If you're able to find a healthy and realistic middle ground, then maybe it's really meant to be.

You’re aware of their baggage and you wouldn’t have it any other way. You love them all the more for it. So they've seen you without any makeup on and you've finally crossed the farting boundary. Neat. But I'm talking about digging way deeper than that surface here. Have you really seen them at their worst? Psychologist Michael Cunningham told Psychology Today that people suppress irritating behaviors early in the dating process and allow them to emerge once there is a commitment. Cunningham said, "When you're dating, you're hypervigilant. Once there's a commitment [like living together], you feel entitled to relax." So think about how well you know each other in terms of the less fun stuff — fears, anxieties, insecurities, negative habits — because these are the things you'll be living with and are now going to become a more present part of your life.

3. You Have Compatible Lifestyles

Does it even make sense or are you just doing it because you think you should? There is no concrete rule that outlines how long you should wait before moving in with your partner. Of course, I wouldn’t advise you bunk together after the third date. But once again, think about your habits and your values of living. How well do they align? It's important to consider how willing you are to change some of the more familiar aspects of your life you haven't ever considered altering before. And the other way around. Are you expecting them to completely adapt to your some of your lifestyle ideals? A lot of selflessness is about to come into play here, so you should be ready for some negotiations. Having celebrated a successful year of living with her boyfriend, Huffington Post contributor Laura Drucker pointed out that the differences that seem like no big deal when your lives are relatively separate can sometimes become a huge issue once you’re living together. So being highly attuned to each other's lives and personalities is crucial here.

Make sure you’ve done the healthy relationship check-up. You probably shouldn't be seriously considering moving in together before you've had the "where are we going" talk, Dr. Chris Hart, a Nairobi-based psychologist told Daily Nation. Are you both happy with where things are going and do you generally want the same things? From something as simple as whether or not you want pets to long-term plans — these things should be cleared up before signing the lease. The last thing you want when sharing a roof is for miscommunication muddled by the sugarcoated image of the relationship to reveal that things may not be where you thought they were.

Being independent in a relationship is so important for a strong and healthy connection. Especially when moving in together, a powerful sense of self is vital to prevent turning a healthy commitment into an unhealthy attachment. Licensed professional clinical counselor Jeffrey Sumber told Her Campus that somebody with an unhealthy attachment relies on their partner to make them feel better, loved, and whole. Dr. Ramani Durvasula, a professional clinical psychologist, also pointed out to Her Campus that unhealthy attachments occur when we start regulating our needs through the other person in our relationship. Now imagine that and sharing a space. Things will start to get pretty stuffy real soon.

Tune in to when (or if) you've spent consecutive days together — bunking together for a solid amount of time, vacationing, just hanging out — and see how that worked out. This will give you a good idea of how things would actually go. While you may have often stayed over at each other's places, Rent.com suggests building up to it by taking a vacation together or making it a point to stay at each other’s places for a full week with no breaks. That's when things really start to get real and you'll know if you're ready to give up some of that solitary freedom.

Moving in together is a big, scary step, but it can also be fun. Be sure to talk about all the different (and important) factors of the move, and it'll reveal a lot more than you may expect.