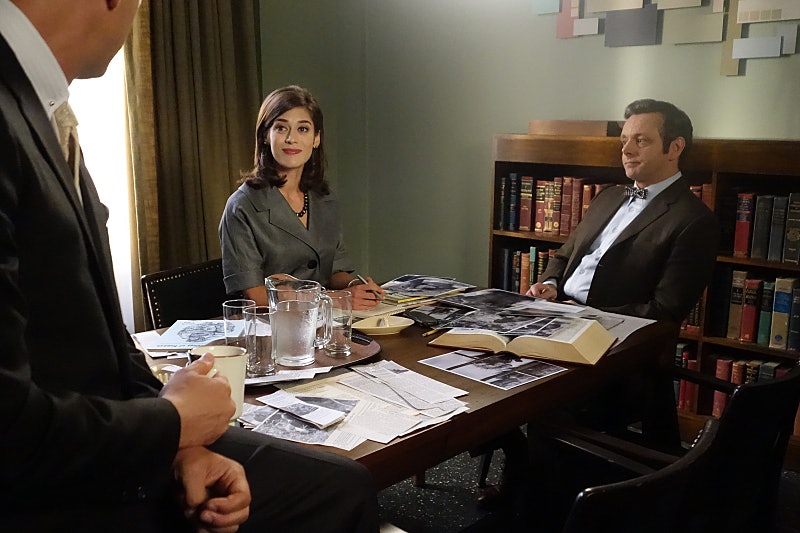 This week's episode of Masters of Sex brought up a lot of questions for me. The first being, what in the name of Gill the gorilla did I just watch? Bill and Virginia literally wrote the book on Human Sexual Response, but their client list expands to include another species in "Monkey Business." The authorities on healthy copulation are called in to consult on the case of a ape who'd lost the ability (and/or the will) to perform. The prospect of helping the animal lights Virginia up, as experienced as she is in interpreting the needs of similarly "inarticulate men." Bill is reluctant at first, but the siren song of a flashy success story for Newsweek is a-calling. Masters is based loosely on a biography of the real life researchers, and this is one of those plots that feels stranger than fiction. That brings me to the second question this episode left me with: did Bill Masters and Virginia Johnson actually treat an impotent gorilla?

I did a little digging and was surprised to learn that this storyline is an instance where the writers took artistic license. The bizarre gorilla subplot and strikingly disturbing sequence in his habitat can't be explained away by a real-life case study. Masters and Johnson dealt exclusively with humans, a fact that the Showtime version of Bill would be devastated to learn. He's so excited about their success at the zoo, though Virginia refuses to take credit for what she deems a fluke and a shortcut.

The history exists in other places in this episode. Jane, official office correspondence girl and Mrs. Lester Linden, invites a friend of hers to the clinic to discuss a performance problem with Bill. Keith, a pal from her theater troupe, has been impotent for two years. Bill refuses to treat him, however, because Keith does not come as part of a set. It's a sexual Catch 22: Keith is uncoupled because he's romantically crippled by his condition; but he can't have his condition assessed without being coupled first. Jane doesn't think this is fair. And in the end, neither does Bill. (His own sexual dry spell is still fresh in his mind.)

As the work progresses and becomes more established, Bill and Virginia continue to widen the circle. Now, they're ready and willing to work with single patients. It's the introduction of sexual surrogates that makes their treatment possible. As a veteran of the study and caring friend to Keith, Jane volunteers to be his un-biased partner. Bill Masters and Virginia Johnson literally invented this form of therapy. The term appears in their 1970 book Human Sexual Inadequacy, though individuals had been working with them in the clinic for years before.

The concept of surrogacy was brought back into the national conversation of sexuality when the Helen Hunt/John Hawkes movie The Sessions came out in 2012. But the therapy has been utilized since Masters and Johnson began finding it useful in their work. Sexuality counselor Ian Kerner described the professional accreditation required and the objectives of a modern sex surrogate to CNN:

These days, surrogate partners are typically trained by the International Professional Surrogates Association in Los Angeles, the main surrogacy organization. Clients are referred to surrogate partners by their therapists or other mental health professionals....The goal is to provide a safe, comfortable atmosphere for clients to explore sexual issues without judgment or fear, and with a professional who is able to go beyond talk therapy and into the hands-on realm of intimacy-interaction.

The IPSA is a non-profit organization, and it follows Masters and Johnson model. The "therapy team" consists of three elements: the patient/client, therapist, and the surrogate. "Open, honest, consistent communication between all team members is a fundamental ingredient of successful surrogate partner therapy," the website says. On the show, the Jane and Keith situation may be much more muddled and familiar than a modern therapy plan. But both the scene where Jane explains her desire to help a friend the way that Lester was helped and the scene where she offers warm and judgement-free support to Keith in the exam room portray sex surrogacy as a professional act free of lasciviousness. Masters and Johnson would be proud.