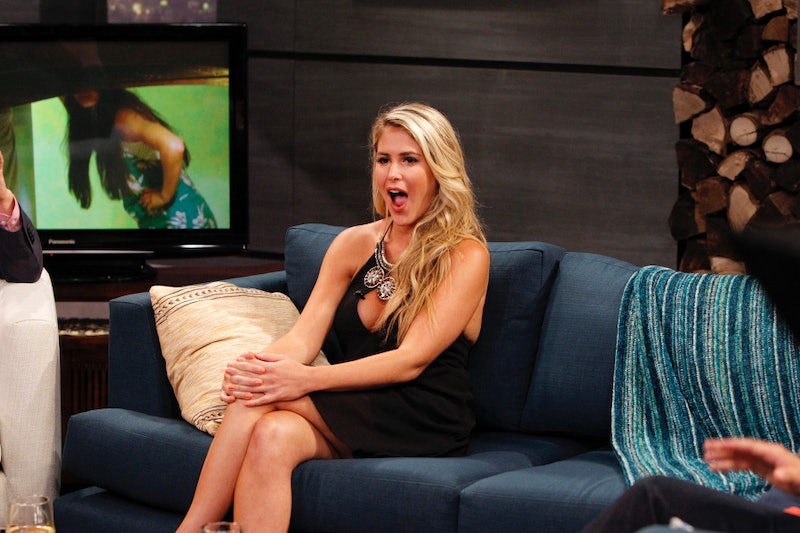 It can't feel good to be duped by a guy you had feelings for and a woman you thought was your friend on national television. But, if you're Bachelor in Paradise star Juelia Kinney, it has to feel a little gratifying to have just about every single person in Bachelor Nation in your corner. And, rightfully so. After all, Joe and Samantha allegedly planned to come on Bachelor in Paradise and do whatever it took to stick around until they both made it onto the show. What it took, according to Joe, was pretending like he was completely into Juelia and aggressively lying to his friends to get Juelia's rose, only to drop her once Sam arrived the very next day. Yikes. So, after Joe's deceit, how is Juelia Kinney doing in real life?

Everything was naturally pretty upsetting for Juelia. If you haven't heard — you would have to mute all dramatic commentary from Carly not to hear — Juelia is a widowed single mother, and that is someone whose heart you just don't mess with, Joe and Sam. So, Bachelor in Paradise and Chris Harrison's big ol' heart brought Mikey T. back to give Juelia a second chance at love. So, things are definitely looking up for her and the sands of Sayulita, Mexico. But, how is Juelia doing now that the show has aired and she's had to deal with BiP's most dramatic deception ever all over again?

She's Soaking Up The Support

Juelia might have felt cast aside by Joe while on Bachelor in Paradise, but in the aftermath of Joe and Sam's trickery, just about everyone has declared themselves #TeamJuelia. And, she appreciates it! Juelia's Twitter is fully of happy retweets and replies to former Bachelor contestants and BiP fans dishing out the love. It's also full of compliments for all her new BiP friends because Juelia just seems to be a really sweet person.

Well, all of her new BiP friends but one. Juelia may have been a little shy in her confrontations of Joe on the show, and you won't find her dishing out too many harsh words after the fact either, but she's got plenty of sass for the "southern gentleman" that did her wrong.

Being Besties With JJ

The person who's really come out on top of this Joe/Sam/Juelia situation is JJ, once a Bachelorette villain, now a Bachelor in Paradise hero. JJ seems to be plenty beloved by the rest of his BiP cast, and especially by Juelia, who got lots of support from him during the Joe debacle, and reunited to go on After Paradise to show how well they're both doing now. Is there any chance these two could work out and bring their families together to from a very tiny Bachelor version of The Brady Bunch?

Loving Her Little One

But, Juelia's main IRL gig is, of course, being a mom to her very cute daughter, Ireland. So, while she's seen a few friends since returning from Paradise, her time is mostly spent hanging with her little one... and that seems to make her pretty happy.

And Enjoying The Little Things

And, if ever the sad feelings from BiP start to catch back up with her, she can always remember the time that a barista (most likely a BiP fan) actually spelled her name correctly.

It definitely sucks that Juelia was played by Joe, but at least she's doing OK after the fact. And, she never stooped to his level, so she's obviously the clear winner of BiP.