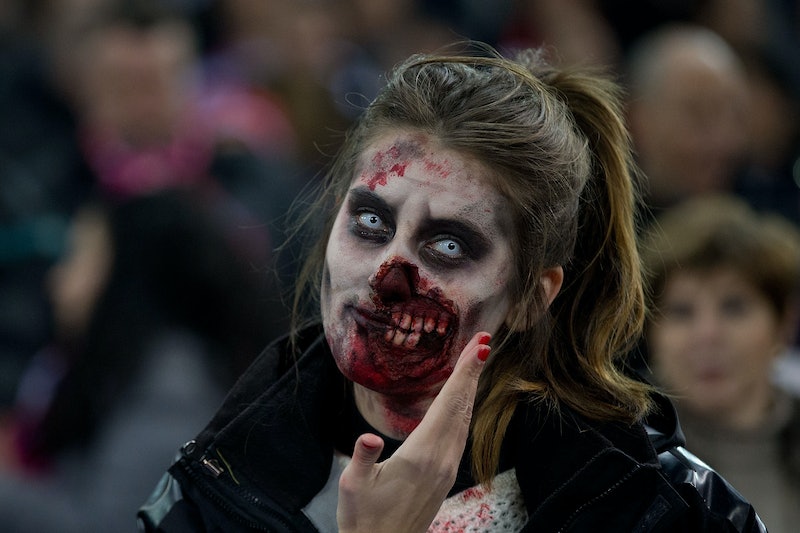 With the premier of Fear The Walking Dead on Sunday, everyone's talking about zombies again — but it turns out that our obsession with the undead might be more than just a cultural fad. According to author Douglas Rushkoff in a video for Business Insider there's a neurological reason we love zombies so much. Furthermore, it's made us contiually go back to narratives about the undead for hundreds of years. Who knew that zombies meant so much to us?

We've all encountered zombie stories in some form with movies like Night of the Living Dead and Paranorman, novels like World War Z and Pride and Prejudice and Zombies, and of course the popular music video for Michael Jackson's "Thriller." While all these narratives tell different stories and in different forms, they share one thing in common: A discussion or depiction of mindless human corpses who are neither alive nor dead, lusting after human flesh. Kind of sounds like me at work on a Monday morning! (Except for maybe the whole flesh part, unless we have a new co-worker on board who I'm kind of into.)

According to the Oxford English Dictionary, the first mention of the word "zombie" appeared in 1819 in a history of Brazil written by poet Robert Southey. So why are we still obsessed with the creatures today? Rushkoff, author of the book Present Shock: When Everything Happens Now, seems to have the answer, and it has to do with coping with anxiety. Here's what Rushkoff has to say about the human-zombie love-affair:

1. We live in a world that's constantly on.

Everyone is connected to everyone else via any device or social networking platform imaginable. Everyone is always doing something, and nothing ever gets turned off.

2. When everyone is living in the "now," people want some sort of conclusion.

Rushkoff says that part of being so linked in with the world results in us not seeing much in the way of cause and effect or origins and goals. Without that sense of "this, then that," we start to ache for a moment when "now" ends and we finally get some peace and relaxation.

3. But what if you can't imagine unplugging or the peace that comes with closure?

What if you're so deep in the game of connectedness that unplugging and removing yourself from the constant hubbub of society is no longer an option?

4. According to Rushkoff, that's when we start envisioning apocalyptic scenarios.

In the zombie apocalypse, there's no Twitter. There are no cell phones. There are no work hours, and there's no commute, no bills or tax day. As Rushkoff puts it, "There's just you and your family on a hilltop with a shotgun, slow moving zombies on the horizon. It's relaxing on a certain level."

5. Plus, you can use the scenario to get out all your pent-up aggression.

That is, you don't have to take it all out in the form of road rage or random acts of being rude to your family and co-workers.

Makes sense, right? But Rushkoff also says there's also a problem with this kind of thinking, which is that if we compare ourselves to zombies — that is, if we try either to find humanity in them or zombie-ness in ourselves — it shows the inherent devaluation of the human. In a world where numbers and computers have more worth than people, we become nothing but zombies, figuratively speaking — and that's when the narratives of the undead start to appeal to us. Pretty deep stuff.

You can watch the whole video at Business Insider — and then maybe take a break from work so that a zombie apocalypse doesn't sound more relaxing than real life.