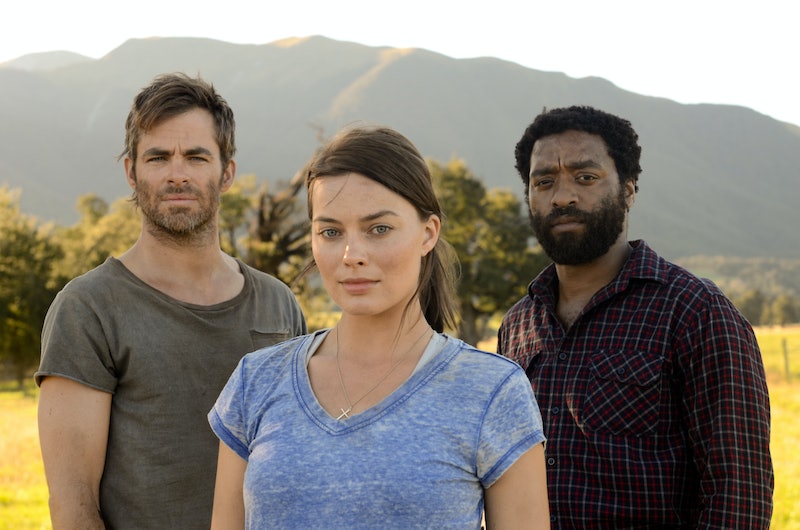 In the newest dystopian story to hit theaters, Margot Robbie plays a young woman who's surviving just fine alone before two wandering strangers (Chris Pine and Chiwetel Ejiofor) show up on her family farm. At this point whenever I got to the movies, I just assume that civilization as I know it will have ended before the opening credits start to roll (imagine my surprise when Amy Schumer wasn't stepping over broken bodies on the way to meet Bill Hader in Trainwreck). But the world doesn't just end; there has to a reason. Every post-disaster story ought to have an inciting incident, even if it's a vague one. So What causes the apocalypse in Z For Zachariah ?

The movie largely avoids the subject, focusing entirely on what comes after the event. I do get it; I mean, what's the point of rehashing a catastrophe that can't be undone? The focus in Z For Zachariah is how Ann (Robbie) will protect herself in these new circumstances. The 1974 science fiction novel that the movie is based on goes into slightly more detail, however. Robert C. O'Brien penned the book less than a decade after the Cuban Missile Crisis; the reason for his apocalypse is a devastating nuclear war, and the after effects of radiation are still present years later.

But a nuclear war isn't the only way to wipe out most life on Earth. (Fictionally. I'm staying in the feature film realm here.) Screenwriters and novelists have gotten creative in cooking up scenarios that cause enough destruction to sufficiently set up their stories of human survival. Here are a few recent post-apocalyptic films and the disasters that caused them.

In the future as imagined by the Pixar allegory Wall-E, humans run themselves off of Earth, consuming as many useless goods as possible, turning the planet into a garbage dump, and then blasting away. At least hope and movie musicals survive.

Frickin' dragons. If society has got to go, I hope it goes by dragons.

Dr. X and his mutant colleagues manage to avoid the scenario that opens the second Bryan Singer X-Men film. If they weren't successful in their plan, the Earth would have been entirely laid wasted to by an army of bloodthirsty robots called the Sentinels.

You know Tom Cruise had to get into that post-apocalyptic movie game. In Oblivion, he learns that everything he knows about the alien force that drove human survivors to the far reaches of space may be a carefully constructed lie. I'll say no more.

Like Z For Zachariah, Snowpiercer hits uncomfortably close to home. With climate change worsening, humans attempt to scientifically alter the weather. The plan backfires and all survivors (including Chris Evans) are forced to live inside a non-stop train if they want to live through the new ice age. Life on the caste-ruled train is filthy and dangerous for everyone in the lower classes; they might do better to try their luck in the snow.

Being a teenager is hard enough when you're not the subject of a devious social experiment by an evil organization. The Maze Runner world has been nearly destroyed by a massive and mysterious solar flare, as well as the resulting "sickness." Or at least that's what Thomas, Teresa, and their compatriots are told. The sequel The Maze Runner: The Scorch Trials is due on Sept. 18, and it'll hopefully bring some new reveals along with it.

Zombies. But they're cute. And have okay taste in music.

See? There are as many ways to end the world as they are stories to tell after that's done.