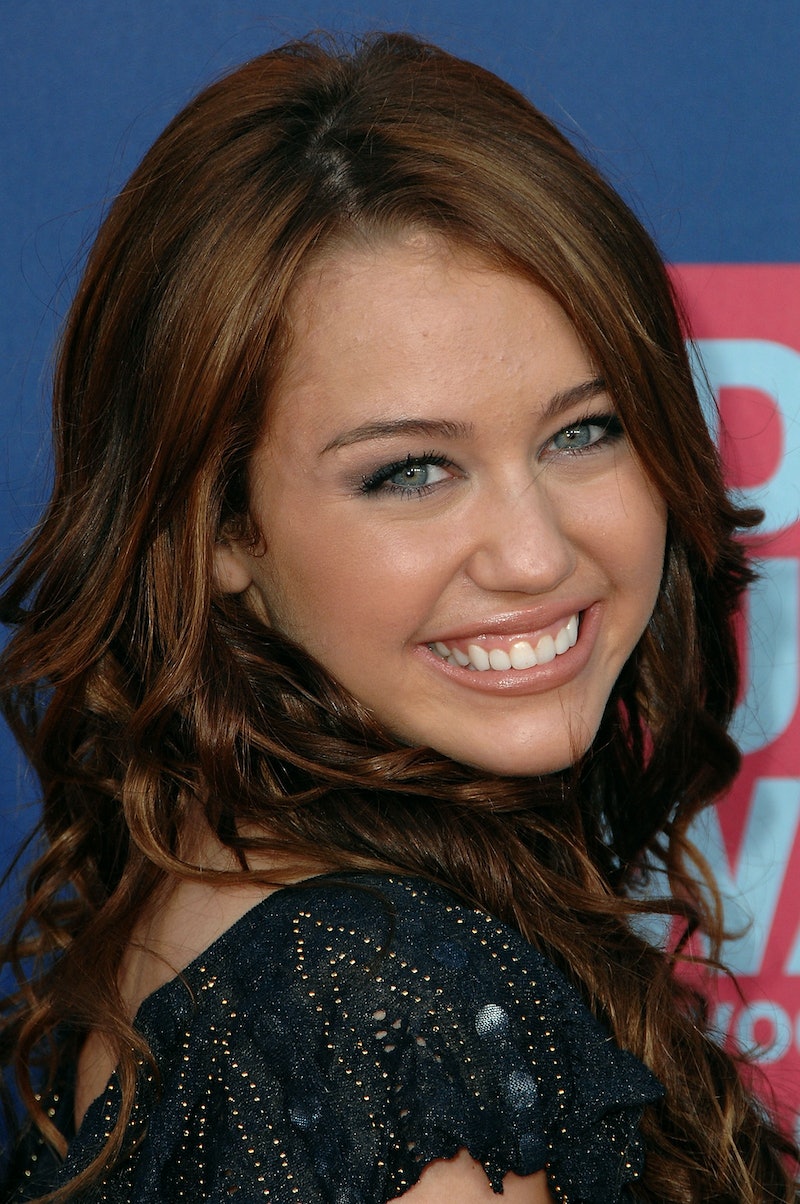 It's time to give thanks to the queer pop angels from above: Miley Cyrus is hosting the VMAs on Aug. 30. So what better time than now to remember Miley Cyrus' first VMAs outfit, circa 2008? Cyrus has inarguably been turning heads since her provocative 2013 VMA performance with Robin Thicke. Along the way, her often strange and revealing getups, her proud display of body hair and tattoos, and her outspokenness and willingness to challenge the gender binary have made her the center of media attention (and unfortunately, intense judgment). Her hosting of the VMAs is undoubtedly a huge win in the inclusive representation department. After all, Chelsea Handler, Roseanne Barr, and Bette Middler have been the only female-identifying hosts over the past 20 years. Not to mention that Cyrus is also the first openly queer person to host the show.

Before she was Queer Pop Icon of the Millennium, Cyrus was known for being the star of Disney Channel's Hannah Montana. According to Cyrus, being on the show didn't exactly lead to a ton of body positivism. She told Marie Claire, "From the time I was 11, it was, 'You're a pop star! That means you have to be blonde, and you have to have long hair, and you have to put on some glittery tight thing.' Meanwhile, I'm this fragile little girl playing a 16-year-old in a wig and a ton of makeup." In recent years, Cyrus has been able to step back from her Disney days, both emotionally and stylistically. She attended her first VMAs red carpet at age 15, back when she was still touring for Hannah Montana and recording her second studio album, Breakout. So let's take a look back at Cyrus' red carpet style pre-Twerking Era.

She's barely recognizable with her long brown locks and her perky, hyper-feminine pose! The look is definitely a departure from her currently short, bleach blonde cut, often accessorized with a stuck-out tongue and raised middle finger. Cyrus played it safe with a sparkly, short sleeved, body-hugging dress and a plethora of sequins and adornments. Her outfit, designed by Zac Posen, just screams teen queen to me, which was of course very fitting for where she was in her career and general existence at the time. She finished the look off with a belt that accentuated her waist and black, zippered, open toed shoes with a bit of a chunky heel.

Cyrus was seen at the awards show with Katy Perry, who was fairly new to the pop music scene at the time. Both were nominated that year for Best New Artist, but Tokio Hotel (a German alternative rock band) took home the award instead. Looking back, MTV must be kicking themselves.

Back then, I did not admire Cyrus or her style. Her Disney character seemed to perpetuate the idea that all tween girls should be lip gloss-loving and boy crazy, which did not speak to me on any level. Since she's become more comfortable in her own skin, and officially breaking ties with her Disney past and her former public sexual identity, Cyrus has built a brand that is entirely her own. I find her way more stylish and relatable now, perhaps because she loves what she's doing and is being totally and completely herself without apology.

Now that Cyrus is out and taking control over her own career, she has truly blossomed into an inspiring and stylish individual. Taking agency over her own voice and not caring what the haters think, she's really doing it right these days. And by "right," I mean exactly how she wants it.

I cannot wait to see what's in store for us this year as Miley takes over the awards show she was once banned from performing in.

More like this
Twitter Is Roasting Liam Hemsworth Thanks To Miley Cyrus' New Song “Flowers”
By Jake Viswanath
Is Miley Cyrus Wearing Liam Hemsworth's Suit In Her "Flowers" Music Video?
By Allie Fasanella
5 Wild Theories About Miley Cyrus’ “Flowers” Music Video
By Jake Viswanath
J.Lo's Micro-French Manicure Has A Fun, Sparkly Twist
By Olivia Rose Rushing
Get Even More From Bustle — Sign Up For The Newsletter
From hair trends to relationship advice, our daily newsletter has everything you need to sound like a person who’s on TikTok, even if you aren’t.