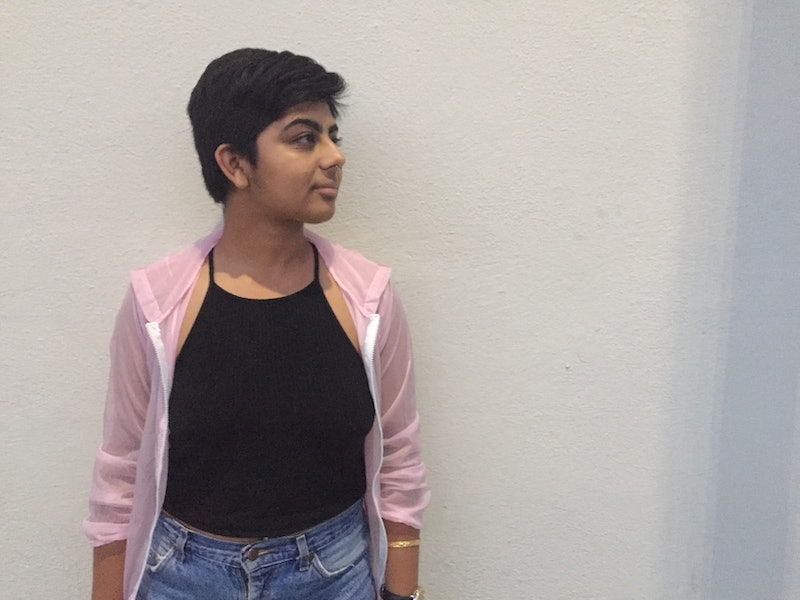 The world is a cruel place for women with unusual names, as evidenced by the careless media butchering of celebrity monikers like Gabourey Sidibe, Zendaya Coleman, and Quvenzhané Wallis (I'm looking at you, Ricky Gervais). In case you hadn't looked at my byline yet, I happen to be one of these women. Obviously I can't speak for everyone on the planet — but if you want to err on the side of caution, there are some things you really shouldn't say to people with unusual names as a rule. They range from unintentionally careless to downright rude, and by and large, they're unpleasant sources of microaggressions.

My name, which has its origins in Arabic and Hindi, means "sweet fragrance" or "aura" — but it completely loses it's charm when someone butchers it. So first, a lesson: The "Me" at the beginning of my name is pronounced the same way the "Me" at the beginning of "Melanie" is pronounced, while the last syllable of my name can be phonetically spelled out as "heck." The "An" which starts my last name is pronounced like "Un" (as in "under"), and the "war" is pronounced like "wur." (as in "bratwurst"). The sounds in all four syllables of my name are present in words familiar to those speaking American English, so why do so many Americans insist my name is so hard to pronounce, even after I go through the tedious process of explaining it?

Of course, it does make sense to be hesitant about the pronunciation of a name you've never seen before. I try to make it as easy as possible for English-speaking Americans to get it right by telling them little cheats: "It rhymes with what the heck! Like 'what the heck, Mehak!' Or 'move to Quebec, Mehak!' Or 'Don't break my neck, Mehak!'" But despite this process, people who remain confused say some questionable things to me — things which I really wish they wouldn't.

Here's the thing: Names are inextricably tied up in our identities, and when you purposefully ignore someone's name, you disregard who they are as a whole. Would you want people constantly telling you that your identity doesn't matter over, and over, and over again? Beause that's exactly what these six things do.

1. "Why didn't your parents just name you something normal?"

Thanks but no thanks for your entirely unsolicited feelings.

3. "Can I just call you [insert vaguely similar sounding name]?"

I always get "Can I just call you Megan? How about Martha? Or Marina! That's a pretty name!" Once — and this is a true story — a professor told me she didn't like my name and would refer to me exclusively as "brown girl" for the rest of the semester. Needless to say, we did not get along.

Even if I did have a middle name (which I don't), it's important not to undermine people's identities by ignoring how they introduce themselves. Calling someone a name that's easier and more convenient for you instead of the name that's actually theirs completely disregards the person's sense of self — it puts your comfort above someone's identity. Not cool.

I'll let you in on a secret: People with hard-to-prounce names often resort to using fake names at cafes to save themselves from irritation, agony, and the potential for microagressions. Though I'd love to be referred to as my real name all the time, telling a Starbucks employee that my name is Rose (something no one has ever mispronounced or misspelled) saves me a lot of energy and frustration.

Calling someone "exotic" is a form of othering them. It establishes that they're different in a way that deserves fetishizing. To call something "exotic" is basically to say, "Oh, this feature or characteristic related to you is not anything I'm familiar with and therefore it's a little strange." It's not a compliment and it's not appropriate to say to someone.

I'm certainly not arguing that everyone in the world should be able to pronounce every word and name that is unfamiliar to them or contains sounds not present in their language. However, names have power, and they often hold the keys to our identities. It's important not to undermine those identities by ignoring the correct pronunciation of a name or by making derisive comments about it. I accept that I'll be called "Mee-hawk" for the rest of my life by strangers, but I expect people who work with me, go to school with me, or are otherwise present in my life to learn to say it correctly.

It's not too much to ask. It's just part of being a decent human being.