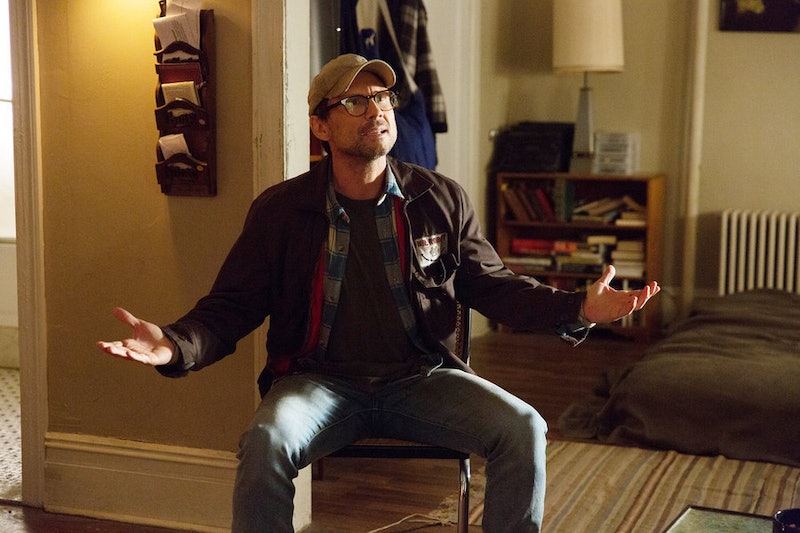 This year, the summer television season was dominated by a surprising underdog: Mr. Robot , a show about computer hackers on USA, a network known less for dramas and more for comedic pleasures like Suits and Royal Pains. But, the network's reputation is likely to change thanks to Mr. Robot. Starring Christian Slater as the titular anarchist hacker and Rami Malek as his unbalanced protégé Elliot Alderson, the 10-episode first season has expertly straddled the line between nail-biting thriller and compelling psychological profile. Why has Mr. Robot soared while other cable dramas have faltered this season? Slater tells Bustle it's all thanks to USA's trust in the show's creator, Sam Esmail.

"They've really allowed Sam to tell the story that he wanted to tell," the actor says. "There was a fearlessness in the room and a faith and a belief and a confidence in Sam that I've never really seen before." But such unwavering faith in a showrunner can backfire, as HBO learned to their chagrin when Nic Pizzolatto's True Detective was ravaged by critics in its second season. So what was Esmail's secret?

Perhaps it was how thoroughly planned out the story of Mr. Robot was before Esmail even approached the network. The writer/director — whose sole previous credit was Comet, a 2014 romantic dramedy starring Justin Long and Emmy Rossum — originally conceived of Mr. Robot as a feature film. (Season 1 would have been the film's first 30 minutes.)

"I've been involved in other situations where the creator of the show doesn't necessarily know what to do after the pilot," admits Slater. "But, that was not the case with this. This was a full-on, thought-out, step-by-step, moment-by-moment, very specifically tailored show where every shot meant something and mattered."

Did the show's unexpected success and popularity come as a surprise to its star? Or did Slater know it was destined for something special the minute he picked up the script? "This is a very unpredictable business," he says. "Every time you get involved in something, it's absolutely a total leap of faith. You don't know if it's ever going to connect with people or if anybody's ever going to actually relate to it."

Slater credits the show's impressive popularity with its timely subject matter, including income inequality and our nation's crippling debt crisis. "We really are holding up a mirror to the times, what's happening in the world we're living in today. In that respect, it's certainly been surreal and very interesting," he acknowledges.

Speaking of surreal... The two episodes preceding the Season 1 finale of Mr. Robot finally confirmed what many viewers had long suspected: Namely, that Slater's character — Mr. Robot himself — was merely a figment of Elliot's imagination. But, the revelations didn't end there. Mr. Robot is no mere delusion; he's also the memory of Elliot's own father, who died when "Evil Corp" covered up a toxic chemical leak. And, Elliot's hacker cohort Darlene? Yeah, she's also his sister, which he only remembered after trying to kiss her. (Shades of Luke and Leia, anyone?)

It turns out Slater figured out his character's true identity about as quickly as most of the show's fans. "I read the pilot and I had a sense that something was amiss," he says. "I remember saying to my agent, 'I don't know if this guy's actually there,' and he said, 'Oh no, that's crazy.'"

So, Slater made sure it was the first question he asked Esmail when they met. "He said, 'Do you really want to know?' And I said yes and he told me," Slater reveals. "And, he told me the relationship to Elliot that I have, which certainly added to how I interpreted a lot of the scenes. The energy between a father and son is very different than with just some imaginary fixture."

And, how exactly does one approach playing an imaginary character? "I always just took it as, I'm playing someone absolutely, totally, 100 percent real and there. And as far as Elliot's concerned, I'm very real," the actor says, then delving into what it was like working with Malek, who plays Elliot.

Day one, they threw Rami and I in that ferris wheel [for one of the pilot's pivotal scenes], and I just liked him. I felt an immediate connection to him and I admired his commitment and dedication and professionalism. He threw himself about as deeply into this character as I've ever seen any actor do. I was really just blown away by him every day.

Thankfully, USA renewed Mr. Robot for Season 2 before the first one even premiered, so we'll get to be blown away by Malek and Slater all over again next summer. In the meantime, tune into the Season 1 finale Wednesday, Sep. 2 at 10 p.m ET, which was pushed a week due to the events of the shooting in Virginia. The network released this statement about the decision.

The previously filmed season finale of Mr. Robot contains a graphic scene similar in nature to today’s tragic events in Virginia. Out of respect to the victims, their families and colleagues, and our viewers, we are postponing tonight’s episode. Our thoughts go out to all those affected during this difficult time.