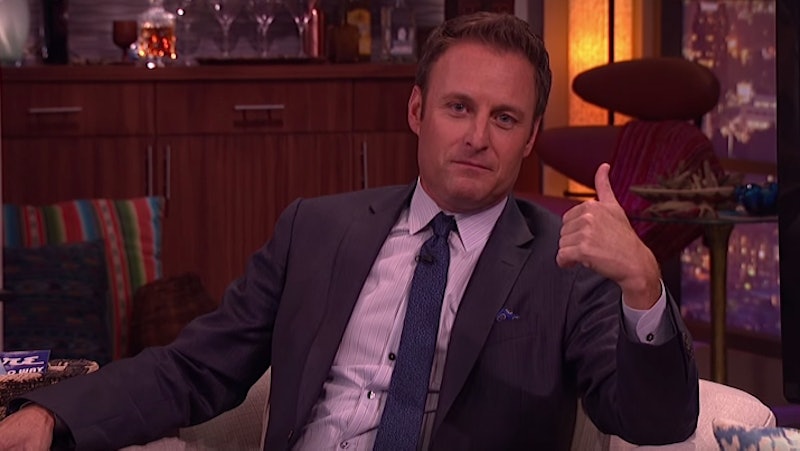 Us Bachelor fans have stuck it out through thick and thin. We've watched amazing seasons, we've watched not-so-amazing seasons. We've even watched the very steamy Bachelor in Paradise. (For two seasons, no less!) But through it all, there's been one guiding light, uniting Bachelor Nation and helping the stars find true love. That is the host Chris Harrison.

There are many reasons to tune into the reality show. There's the drama, the over-the-top scenarios in which people fall in love, the romance itself, and the totally eligible people competing for one final rose. It's given that in such a high-pressure situation, there's going to be a few bumps along the ride. But that's what Harrison is there for — to guide the Bachelor or Bachelorette and to serve as mediator for all of the non-stop action on the show. With a combined 30 seasons under his belt (and that's not taking into account spinoff shows), there's a reason Harrison is so integral. He's the glue that unites each season; the person who sees all of the action and thus acts as a voice for Bachelor Nation. And he does it all with apparent effortlessness.

In honor of that, here are seven times Chris Harrison was your favorite part of The Bachelor.

1. When He Promises The Bachelor Will Blow Our Minds

Each season ups the ante, proving him right pretty much every time.

2. The Bachelor In Paradise Opening Credits

Way to embrace the glorious cheesiness of the credits.

3. When He Let Kaitlyn Bristowe Change Up The Rules

Because he understands that no Bachelor or Bachelorette is the same.

4. When He Asked The Stars The Questions We All Want To Ask

Chris Harrison is the voice of the people.

5. When He Revealed He Watches The Cocktail Party

In general, anytime he talks about the show is amazing.

6. When He Loves The Show As Much As We Do

The voice of Bachelor Nation gets us.

7. When He Plays Up The Drama

The show definitely has its corny moments, but Harrison playing into them makes everything better.