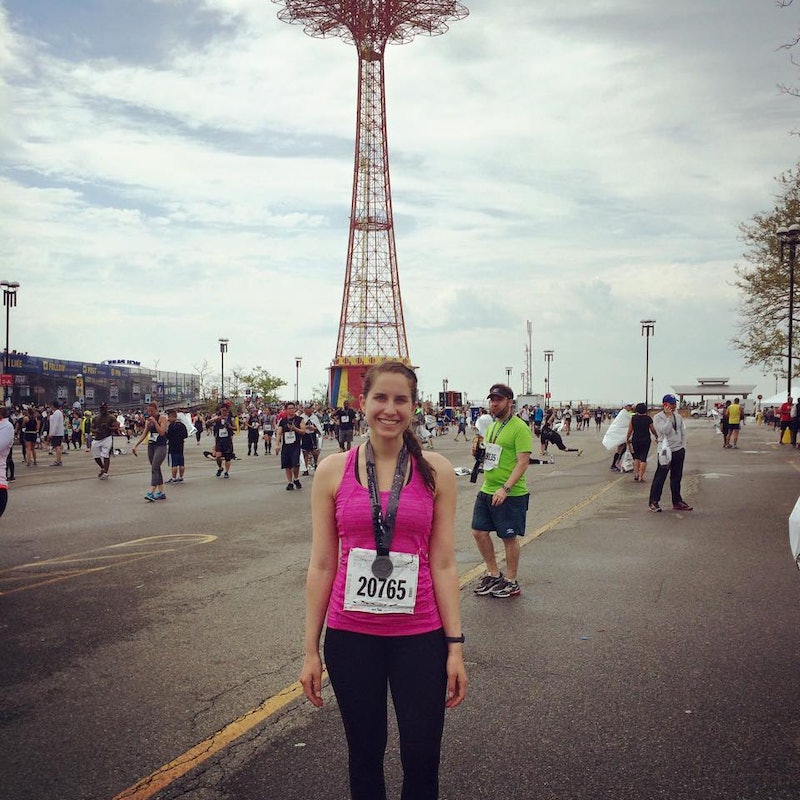 When I first saw David’s* profile on OKCupid, my heart sped up. Thirty-two, born and raised in Manhattan, Jewish and really cute?! He seemed smart and funny — my two main requirements in a mate — and I didn’t get the vibe that I should expect a dick pic anytime soon. Given the Rubik’s Cube that is online dating, you can imagine my pleasant surprise when he messaged me, and then actually followed through on making plans for us to get drinks later that week.

I’m usually pretty laid-back when it comes to first dates. But that morning, amidst my third outfit change and second front-hair-section blow dry, I realized that I was actually nervous. On paper, he appeared to be such a perfect match that before we’d even met, I thought we might live happily ever after.

Oh how wrong I was.

The date got off to a great start, as we bantered about growing up in the city over a glass of wine at a trendy midtown bar. He was easy to talk to, and shared my love of historical fiction, summer camp and poking fun at cultural Judaism. Sure, he had lied about his height by an inch or two (or three), but there was undeniable chemistry in the air. He was just remarking on how refreshing it was to go out with someone so compatible when I made the classic rookie mistake of bringing up politics on the first date.

“At least coming from NYC, I know you’re a Democrat!” I exclaimed flippantly, with a level of confidence that only comes from putting faith in one's deeply-held cultural stereotypes.

“Oh no, definitely not,” he replied, laughing and mumbling a series of incoherent sounds.

I felt panic start to rise in my throat as I tried to think fast. There was no way such a cute, funny Manhattanite could be rooting for the enemy. He had to be kidding just to get a rise out of me, right?

Our date quickly switched gears from discussing our mutual love of Nabokov to why Obama is a communist who's hellbent on destroying American capitalism. Not only had he voted against the Democrats in 2008 and 2012, but he’d also voted for Bush in 2004! This was no casual conservative I was dealing with.

I’ve always been a fan of heated political debates — especially over alcoholic refreshments — so we continued talking, and amicably parted ways some time later. I even agreed to go out with him again, in an attempt to stay open-minded about someone I had been so excited to meet. But I ultimately turned down his request for a third date.

Even after a full evening of avoiding political conversation (an unspoken agreement we'd seemingly both made for date #2), I couldn't shake the feeling that I would never be able to get over our fundamental differences. No matter how many times I tried to look deep into his eyes and conjure thoughts of the happy union of James Carville and Mary Matalin, I simply couldn’t wrap my mind around dating a Republican.

If want to have sex with me, then you need to get in bed with a candidate who supports my right to choose.

I kept returning to one moment in particular. During our date, David got defensive when I accused his party of fighting against marriage equality and a woman’s right to choose. Like many Millennial Republicans I’ve encountered, he was quick to label himself as just a “fiscal conservative,” and said he aligned himself with my views on key social issues. And while I'm sure he would support his sister's right to choose, or happily attend a friend's same-sex wedding, I realized that to me, just saying that isn't enough.

After my experience with David, I realized that no mater how "perfect" a guy may seem, I still believe that a vote for the Republican Party as it stands right now says something very distasteful about a person's character. I can no longer interpret the label of "fiscal conservative" as anything other than moral cowardice.

In today’s political climate, the fiscal Republican no longer exists. Of the current 2016 GOP presidential hopefuls, there’s not one candidate who publicly believes that I should have the final say in my right to choose, unequivocally. No matter how pro-choice you claim to be, it's all just meaningless words if you vote for a candidate who is willing to rid millions of women of the right to control their own bodies, or to defund organizations like Planned Parenthood that support reproductive health.

Living in liberal New York City, it’s easy to take access to safe, legal abortion for granted. But for millions of women in the United States, it’s a very different story. Every vote affects people across the entire country, and being supportive of just your girlfriend’s right to choose does not make you pro-choice. It's about supporting every woman's right to choose.

My mid-20s dating is, at its core, an audition process for the role of my “life partner.” And I’m not interested in casting a man who puts his wallet in front of his morals. So gentlemen, remember: If you want to have sex with me, then you need to get in bed with a candidate who supports my right to choose.

More like this
How To Politely Reject Someone Who Keeps Asking You Out
By Laken Howard and Lexi Inks
Breeding Kinks Have Been On The Rise Since Roe V. Wade Got Overturned
By Lexi Inks
8 Completely Unserious Tips To Make Your Cuffing Season A Success
By Ginny Hogan
10 Ways To Be More Empathetic To Your Partner
By Raven Ishak and Lexi Inks
Get Even More From Bustle — Sign Up For The Newsletter