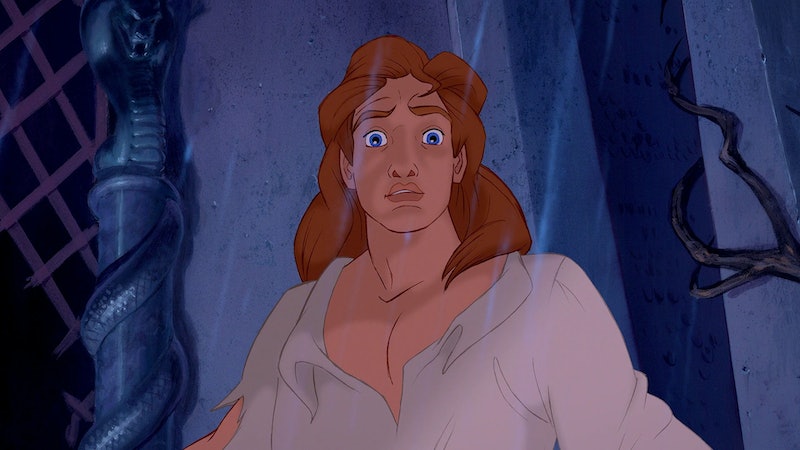 I was in Cuba, and I'd just fallen for a tan, handsome painter from Havana. He was poor, with wavy hair, tan skin, and an adventurous, boyish spirit. Deep into my Havana Nights adventure (only way, way more x-rated), I thought that Jose was already fulfilling all of my possible fantasies. That was, until we were getting off a ferry boat, on the way to the poor(er) side of town — his neighborhood. Jose got out first, then reached down into the bow of the boat, offering me his hand.

He grinned. I swooned. I let his hand hang there for a moment. And then I grabbed it. Hard. My Aladdin fantasy had truly come full circle. As I got off the ferry, I had a sneaking suspicion that my romantic life might have just peaked.

Jose's joke was no accident. The U.S.-Cuban trade embargo had not prevented Jose and plenty of other Cubans my age from growing up on pirated copies of the same Disney movies I had, like Beauty and The Beast, The Little Mermaid, The Lion King, and Mulan. But his favorite, like most guys I've dated? The character he was most often compared to: Aladdin.

I'd noticed the slight likeness before, but it wasn't until that moment that a familiar thought struck me — do I have a specific romantic type because I learned it from my childhood Disney prince crushes, or did I have a crush on certain Disney prince crushes because they had just always been my type? It's a chicken or the egg — or rather, Disney prince or the female boner — question for the ages.

I don't have the answer — but I do know a fair thing about how these "men" have shaped my adult dating life, for better or worse. (Disney princess crushes, alas, are a whole other article, coming soon.)

Here's what your favorite Disney prince says about your type — and how your love for that cartoon dude screwed you over forever in the realm of relationship expectations. I should know. I've dated all of them.

The Moment You Fell In Love: When he was playing with Max on the boat, your four year old self was all, I'm. so. in.

What This Says About Your Type: Ah, a woman after my own heart. Prince Eric was your first love, and he cemented your thing for tall guys with dark hair, a wide smile, a strong jaw, shapely eyebrows, beautiful blue eyes and ... wait, what was I saying? You still love a guy with a thing for the water and dogs, the type of man with a sort of boyish-yet-classic masculinity that makes it look like he could build you a fire and cook you some dinner before wrestling you playfully into bed.

You also consider yourself to have excellent taste in men ... which is why you're a serial monogamist.

How Prince Eric Screwed You Over: A part of you thinks that you shouldn't really have to put that much effort into making men fall in love with you — I mean, can't they just see your amazing essence? Don't they feel how you've already saved them in a past life? Words sometimes feel like they cheapen things for you; shouldn't you just be able to communicate everything through a series of meaningful, deep glances?

Also, when a guy isn't able to easily, literally swoop you off your feet, you've got a problem that no sassy singing shellfish can solve.

The Moment You Fell In Love: It's a toss-up between when he covered Belle's eyes before giving her the library and the ballroom dance scene.

What This Says About Your Type: You know that the kind of guy you like gets a lot of sh*t for being kind of a dick, but your friends don't see what he's like when he's alone with you. Yes, he can be a little brusque and his behavior is often misunderstood as rude. And yes, he might have offended your family when he met them by talking too bluntly about politics or animal rights or how much time he spends on his conspiracy theory message boards. But you love his forceful, opinionated nature. Plus, when you guys argue, something productive always comes out of it, even if that something is only hot makeup sex.

You also have a thing for guys with killer book collections and chest hair. (Guilty. As. Charged.)

How The Beast Screwed You Over: Some guys, it turns out, are just jerks. You've fallen for a few, and wasted more time than you'd like to admit trying to change a man. You sometimes mistake anger for passion, and you've spent too much energy that you could have been using to travel and learn on trying to make it work with a guy who was just never going to change. Some Beasts turn into handsome princes, sure; but some are just giant, ill-tempered dog-men, no matter what you do to their Enchanted Rose.

The Moment You Fell In Love: *Please see above.

What This Says About Your Type: You like a guy with pretty-boy, almost-girlishly-fair facial features ... and a man's body. Something about the combination makes you want to go ditch your family and live in an isolated castle somewhere, which is totally going to happen one of these days. You are probably way into the man bun trend.

Favorite Sex Position: Butterfly, just like the beautiful one he turned into.

How Human Beast Screwed You Over: Every time there aren't literal fireworks shooting out of the sky during a first kiss and your room doesn't suddenly turn into a gothic castle, a part of you is genuinely disappointed. You also tend to think that inside every douchebag there's a good guy with some fine, fine back muscles just patiently waiting to get out. Shockingly, this isn't usually isn't the case.

The Moment You Fell In Love: A picture speaks a thousand unrealistic-expectation-building words:

What It Says About Your Type: Girl, I get you. You like your men playful, adventurous, a little rough around the edges and probably rocking some stubble. He's usually a starving artist type, but what he lacks in money he sure makes up in charm and a generous spirit. You will do almost anything for a guy with a great sideways smile, but like Jasmine, you won't take lying, or much sh*t in general.

You know how to make this kind of man weak in the knees with a strategic swivel of your hips, and even though he likes to think he's the one in control, you know better. Also, you might be into bondage, just because of that scene where Jasmine is tied up.

Favorite Sex Position: The Three Legged Dog (Do you trust me?).

How Aladdin Screwed You Over: You've definitely, definitely dated plenty of guys who lacked direction. A few of them also kept secrets from you, and even though you knew it was happening on some level, you found yourself blocking out the obvious in ways that were ridiculous in retrospect (like the fact that Aladdin and Prince Ali are OBVIOUSLY the same person).

Also, turns out some starving artists don't actually make much art. They just steal sh*t, try to avoid the cops, believe in magical thinking, and grin too much at other girls.

The Moment You Fell In Love: I have gone on the record as saying that the log scene where he "becomes a man-lion" made me feel things in my pants way back when.

What This Says About Your Type: Darling, ain't no shame. They anthropomorphize the hell out of these characters. And so what if you like a guy with a rough past? He's got some issues to work out, but his heart is pure and sensitive. Also, he's got great hair, and a very strong jawline.

How Simba Screwed You Over: You have a thing for guys who are damaged in some way, and you think you can heal their pain. The guys you like are also often driven by guilt or running from something, and can get easily distracted. They have daddy issues, and tend to focus too much on living up to the standards other people set for them. Maybe some of them do finally let down their guard, and let you see their secret, tender soul. But some others have definitely ended your six month long relationship by saying, "I'm sorry that you thought we were dating, but..."

The Moment You Fell In Love: Anytime he was chasing after Cinderella.

What It Says About You: Look, to each her own, but ... really? OK, OK, you're a classicist. You like the good old-fashioned fantasy of a man coming to save you with his true love, and don't really ask much more of a relationship than that. There's nothing wrong with that (except possibly everything, but we can discuss that later). Look, someone needs to date the normal, super-boring guys who just want to get married, so it might as well be you. You've been accused of being basic before, but so what if you just like your vodka with cranberry juice and some cuddling with your Mindy Project?

Plus, all the other guys you know seem to be birds or pantsless mice, so your standards of what constitutes a real romantic connection are not, like, crazy-high.

How Prince Charming Screwed You Over: Your friends often secretly question your taste in men, but don't feel like they can actually tell you, because technically, there isn't anything wrong with the guys you choose. You know, besides the fact that they tend to lack a personality and be boring as hell.

The Moment You Fell In Love: Honestly, something about how mean he was in this song did it for you:

What This Says About You: No, this does not mean you "have a thing for Asian guys," idiot. That said, you have a tendency to date men from different backgrounds more often than many of your friends, because only dating guys who've lived the same life as you is boring as hell. You like a guy who's athletic and calm; the strong, silent type. You enjoy melting his heart slowly, like a delicious popsicle you'd like to lick off his abs. Once again, you have a thing for man buns, and are possibly (very) into rough sex.

Favorite Sex Position: X Marks The Spot, because he can aim his bow and arrow at you anytime.

How General Li Screwed You Over: You tend to get into relationships that don't fully come to fruition, and have a lot of long-term crushes that don't go anywhere. Sometimes, having the secret crush is even better for you than having an actual relationship that might ruin the fantasy. You also kind of have a thing for arrogant guys who think they're better at everything than you. You'll be able to prove them wrong when you have your "climbing the pole" moment, right? Right?

More like this
The Prince William & Rose Hanbury Rumours, Explained
By Frances Stewart and Sam Ramsden
The First 'Percy Jackson & The Olympians' Teaser Comes With An Ominous Warning
By Grace Wehniainen
The New 'National Treasure' Series Trailer Teases The Return Of A Popular Character
By Grace Wehniainen
Are Quality Time & Gift-Receiving Love Languages Compatible?
By Lexi Inks
Get Even More From Bustle — Sign Up For The Newsletter