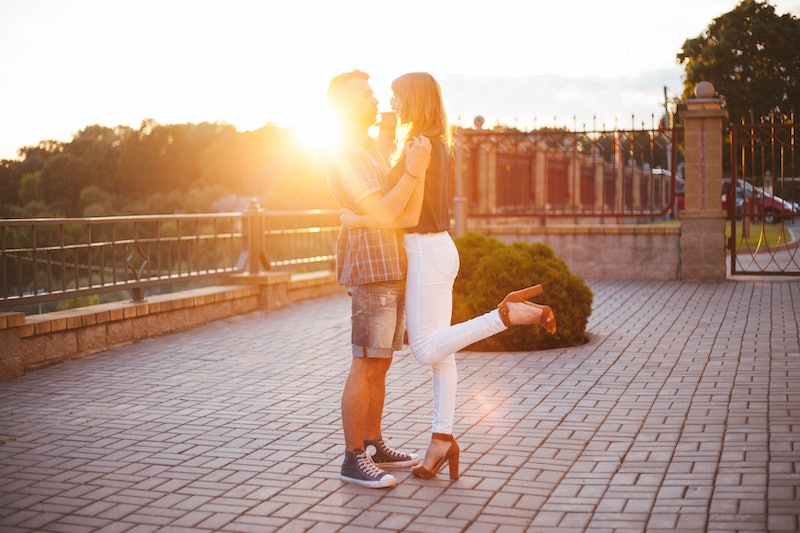 In a world so inundated with technology, it's not surprising that something as seemingly universal and timeless as romance has evolved, too. Of course, apps like Tinder and the ease of online dating have significantly impacted our dating lives; after all, I'm sure the invention of the telephone worked wonders in its day, too. Even if you're a hopeless romantic and are holding out for an old-timey, traditional courtship, it seems that modern-day romance and how we date now is as depressing as you'd expect it to be.

I won't pretend that I particularly care that old-school romance is on its way out. The whole damsel-in-distress, looking for a husband to "keep me" thing does not appeal in the slightest to my feminist sensibilities. But I'd also be lying through my teeth if I said I want to go through life without ever finding a lover who will (occasionally) fill my days with passion and romantic gestures. I can count on zero fingers the number of times a man has bought me flowers or chocolates before a date, and I certainly don't expect anyone from OkCupid to throw his jacket over a puddle for me.

However, we still have The Notebook and Titanic to remind us that true love and romance used to be beautiful things, so that understandably skews our perceptions of modern romance. Obviously, love still exists, blah blah blah — but that doesn't mean it can't be a b*tch to find it. Here are five examples of ways "romance" has changed for us millennials — either take it in stride or moan about it, the choice is totally yours.

If you're the kind of person who avoids your Gmail inbox like the plague, this could be the endtimes for you: According to a new study, millennials preferred getting a romantic email message to receiving a voicemail. In a way, it makes total sense: The study found that the language used in the emails was stronger and more thoughtful than that of the voicemails, probably because you have more time to think carefully about what you want to say. So even though it may seem like email can't possibly be "sexy," it looks like we, as a species, really have adapted. It's only a matter of time until we all fall in love with our Siri-like companions, a la Her.

When you spend hours swiping left and right, it can be hard to remember what it must have been like in the pre-Tinder days (which, incidentally, was not all that long ago). Although there are definitely benefits to online dating, it undeniably creates a culture where we're always looking for the next best thing, often unwilling to settle down and really take the time to get to know someone. I'm all about online dating, but that doesn't mean I want other expressions of romance to be obliterated in its wake.

When's the last time you "courted" someone by calling them on the phone to get to know them? Just like emails are more romantic than calling, texting also takes the cake over conversing with someone using your actual, physical voice. The closest thing we have to "calling" a potential date these days is sending them a Snapchat video of you playing fetch with your dog. Even when you are in a relationship, there are still plenty of people who are hesitant to pick up the phone and hit dial. Texting is easier, certainly, but that doesn't mean we all have to be afraid of the sound of our own voices.

What's one of the best/worst things about living with your best friend when the both of you use OkCupid? You get to witness firsthand, on an almost-daily basis, how pathetic some guys' attempts to get a date are. Namely, when we send each other funny screenshots of gross or weird or creepy messages, only to get the response, "OMG, he sent me the SAME EXACT message earlier!" Listen, I know you think your spiel about what a great catch you are is Pulitzer-worthy, but that doesn't mean you should mass produce it and send it out to anyone with eyes and a dating profile. I get that everyone's busy or whatever, but I can honestly say I've never sent the same message twice, unless I was feeling seriously lazy and just said, "Hey, how are you?" to someone. Get your sh*t together, guys.

Often, in my darkest hours, I wonder if there are any millennials left out there who have not yet uttered the most damning of phrases: "Got Kik?" According to the 2015 SKYN Condoms Millennial Sex Survey, 57 percent of people have admitted to sexting, with seven percent of them doing it daily. I won't condescend you and say that I don't also engage in some voracious sexting, but it's certainly not something our Founding Fathers probably would have foreseen for the future of America's youth, nor is it something Jane Austen would have written into the storyline of Sense & Sensibility. Sex-positivity lives, but romance may or may not be dead as a doornail.