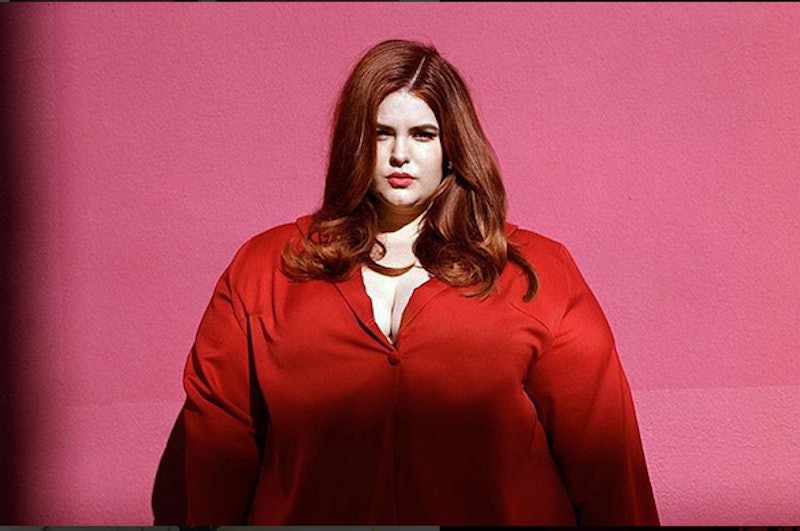 This model is killing it. She's absolutely the dream feminist BFF we all need in our lives. I mean, just the fact that Tess Holliday is challenging oppressive beauty standards and turning the modeling industry on it's head is enough. But on top of that, she's also gone to the mat for victims of bullying, victims of racially influenced violence, and members of the LGBTQ community who just wanted to look half as fabulous as Holliday at their weddings. And she openly and proudly identifies as a feminist, to which I say: yassss.

As a proudly plus-sized woman myself, it’s so refreshing to have a role model who is just as much substance as style (and I’m not just saying that because she tweeted me back this Saturday). The Strong Women Strong Girls Foundation points out that having positive role models increases self-confidence in young girls — and they need all the help they can get. According to a study in the Journal of Research on Adolescence, young girls lose self-esteem as they navigate puberty. This is, in part, due to a society that changes the focus from their abilities to their appearances.

The study goes on to mention that teen and tween girls drop out of sports, quit recreational activities and even take a dip in their grades as pressures from our media-driven culture dictate that their value lies in they way they look, not what they can do. Diverting from these image-focused pressures often leads to bullying.

And then there’s Holliday, a victim of bullying herself, who not only breaks the mold, but crushes it, and gives girls and women everywhere an avenue in which they can not only accept themselves, but love themselves and rise above oppressive beauty standards.

Seriously — the total package dream BFF. See for yourself.

1. When She Coined The Hashtag #effyourbeautystandards

Thousands of people used the badass hashtag to fight back against the standards of beauty that exclude so many types of bodies.

2. When She Helped Find The New Voice Of Plus Sized Fashion In The UK

As if putting her own voice out there wasn't enough, she's helping to create space for other body-positive activists. She's working to change the conversations we have about bodies.

3. When She Supported Marriage Equality

And with a Beyonce poster? Come on. Queen T and Queen B together is too much awesome for my brain to compute. Love wins!

Holliday isn't afraid to talk about the things we need to be talking about. She's not all fashion (not that being dedicated to fashion is a bad thing). She has a voice and she's using it for good.

5. And Was Super Trans Positive

Her feminism is intersectional and trans-inclusive. Which is the dream, right?

6. When She Schooled The World About Plus-Sized Sex

Because plus sized ladies not only have sex, but they're sexy and they enjoy being sexual. This is a message we rarely hear, and we need to here is more often!

7. When She Shut Down Internet Bullies

She's been there. So when she shuts down bullies, you know it's from the heart and not for the publicity. She has power and she's not afraid to use it for good.

Holliday appeared in a video and ad campaign aimed at celebrating diversity in fashion. And I don't mean "diversity" in terms of the types of styles represented, but in the types of bodies and the crushing of gender stereotypes. Plus, it supports sustainable practices as well.

9. And All The Times She Just DGAF

Because OMG, it's just so damn refreshing. And important!