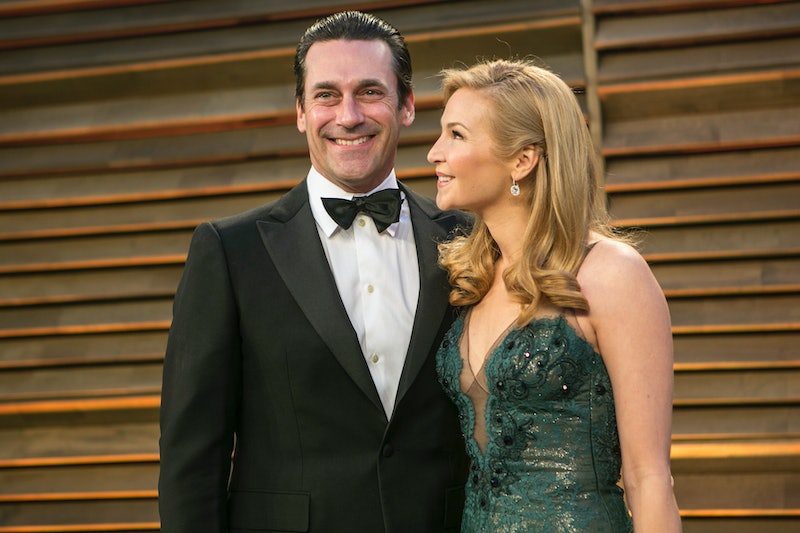 Jon Hamm and Jennifer Westfeldt announced their breakup on Monday, bringing to an end one of the longest-running relationships in Hollywood. With 18 years together under their belt, Westfeld and Hamm seemed like they could be the couple that makes it. Westfeldt and Hamm had been dating for years, since long before Hamm reached super stardom playing Don Draper on AMC's Mad Men. How did Jon Hamm and Jennifer Westfeldt first meet, you ask? Well, like any good Hollywood love story, the two first crossed paths in Los Angeles.

Hamm and Westfeldt met when the were both struggling actors in the late '90s — Hamm got his first television role in 1997 as 'Gorgeous Guy at Bar' in an episode of Ally McBeal, and Westfeldt followed in 1998, playing Melissa in Two Guys, a Girl and a Pizza Place.

"Jen and I met in L.A. at a party — a mutual friend's birthday party... completely random meeting... she was out here auditioning for a pilot or something... and I was, too... and she got an audition for Jake Kasdan's film Zero Effect [1998]... and wanted to read with somebody who was a guy, and she didn't really know any guys out here, so she called... and that was, kind of, how we first officially met, running scenes from Zero Effect. Apparently I wasn't very good, 'cause she didn't get the part," Hamm said in an interview with The Hollywood Reporter.

Hamm and Westfeldt didn't start dating until later, as Hamm also revealed, Westfeldt was dating someone at the time. "She was involved with somebody, and I may have been involved, as well. Yeah, we were friends for a long time before we officially started dating — and we've never gotten out of the 'dating' thing. We're still in it," Hamm added.

Westfeldt tells the story a bit differently, telling The Guardian that when a friend recommend she contact Hamm to read lines with her, she thought, "You mean that arrogant guy from the party? No thank you."

Westfeldt drove out to Hamm's apartment in Silver Lake, where he was living with four roommates. "When I got there, Jon was so sweet and he worked on these lines with me. I was like, 'God, this guy is so talented...and so handsome!" Westfeldt admitted.

The rest, it seems, is history! Westfeldt and Hamm went on to find professional success. Westfeldt co-wrote her first film, Kissing Jessica Stein in 2001 — Hamm had a small role — and later made her directorial debut in 2011's Friends with Kids, in which she starred alongside Hamm. Hamm famously became a household name when Mad Men premiered in 2007. And, throughout it all, Hamm and Westfeldt presented a united front, ever since that L.A. party.

"Our lives are entwined. It's a long time [together]. I'm definitely the guy that repeats his stories! Mostly it's just paying attention and keeping engaged and not succumbing to inertia or going through the motions," Hamm told People in 2014.

Despite their relationship coming to an end, 18 years in Hollywood is certainly nothing to scoff at. And, to think, it all started at a L.A. party.

More like this
Michelle Williams & Thomas Kail's Relationship Started On This TV Show's Set
By Sabienna Bowman
Then Vs. Now Photos Of The 'Enchanted' Cast In 2007 & The Sequel's Stars In 2022
By Marina Watts
'Gilmore Girls’ Lauren Graham Just Revived Our Hopes For A New Reunion
By El Hunt
See 'Twilight' Stars Together Again For A Sweet Cullen "Family Reunion"
By Stephanie Topacio Long
Get Even More From Bustle — Sign Up For The Newsletter