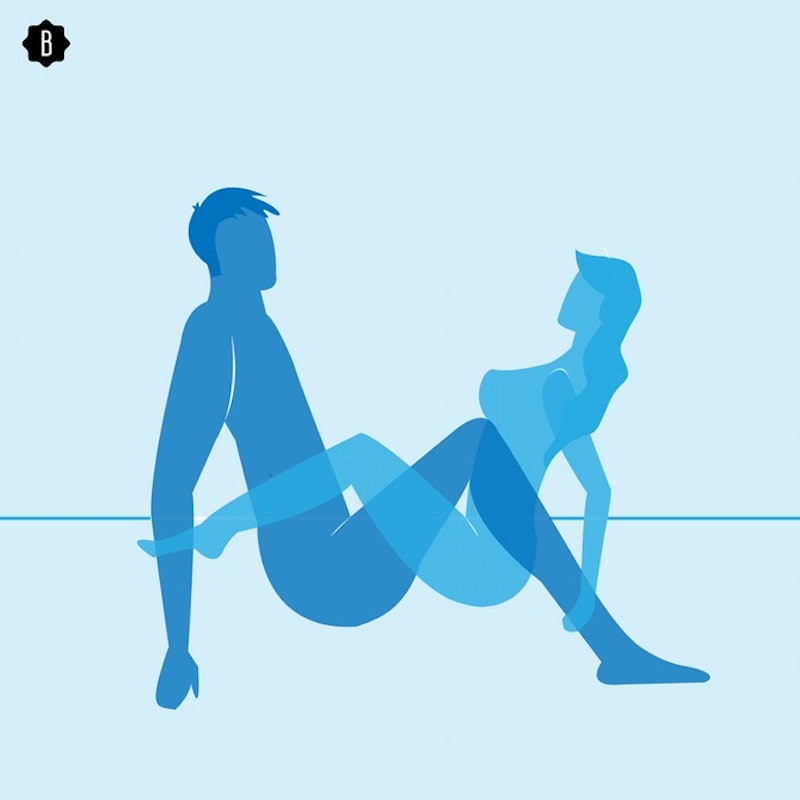 At some point in your sex life, you’ll begin to balk at things like the missionary position. It’s not that it’s a bad position, but considering how nimble the human body is, you owe to your partner and yourself to branch out and try other positions. Other advanced sex positions you choose may not include standing on your head while your partner penetrates you from above, because that’s a whole level of expertise that many can’t harness. But there are definitely positions out there for you seasoned sex "positioners" — ones that will rock your world and introduce you to new sensations that you may not have even known existed.

According to the Kama Sutra, there are some 100 sex positions (or more?) that you can integrate into your already exciting sex life. But if we’re to be honest, some just aren’t that appealing. Like the aforementioned headstand position ― does anyone want to have sex while on their head? Probably not, and that’s a-OK.

But since you're no longer a beginner in the realm of sexual activity, it’s time to step up your sex position exploration by more than a few notches. You need to dive into uncharted territory and see what else is out there.

Here are five sex positions for those of you hoping to claim expert status.

How To Do It: If you ever took a gym class as a kid, then the name of this position should definitely give you some sort of insight into how you’re going to finagle this one. Basically, both you and your partner want to get into a pseudo-crab position. He should sit on the floor with his legs bent, feet flat on the floor, and his hands behind him for support. You, in the same position and facing him, lower yourself onto his penis and start your bumping and grinding.

How To Do It Once again, we have a position that reminds us of something else. Yoga, anyone? For this one, you want to lie on your back while your partner gets on his knees facing you and between your legs. From here, you want to arch your back while you bring your hips up to meet his hips as he enters you. Depending on your height, you may find that your feet won’t be flat on the floor, but since he’s supporting your hips, it’s not like you’re putting too much weight on your back or toes. Your hips also provide leverage for him, as he grabs tight, and thrusts in and out.

Why It Works: The angle at which his penis is in during this position creates a very deep penetration, one that hits your G-spot like whoa. It’s also in this position that he can either stimulate your clitoris with one of his hands or you can do it yourself, either manually or with a toy. Achieving an orgasm while having both your G-spot and clit stimulated simultaneously is practically otherworldly.

How To Do It: If you already caught this one in our list of best positions for the female orgasm, then you already know getting into it is pretty tricky. In fact, it’s suggested that you do a trial round with your clothes on so that you know what you’re getting yourself into. But let me try to make this one as simple as possible.

First, you want him to lie on his back, with both knees bent and his feet flat on the floor. At that point, you’re going to crawl on top of him, facing away, with one of his legs straddled between your legs, while you lower yourself onto his penis. At the suggestion of Bustle’s Vanessa Marin, from here, you want to imagine his body is a clock and his head is at the 12 spot: “If you’re straddling his right leg, your body will be pointing at about 7:30. If you’re on his left leg, you should be turned toward 4:30. From there, you’re essentially going to rock back and forth, rubbing against his upper thigh and pubic area.” It actually sounds harder than it is, but it’s expert level, so if you pull it off, you get to pat yourself on the back.

Why It Works: This position is all about you grinding and being in control of all that grinding, so you get to decide just how and when you’ll climax.

How To Do It: I love this position, but to be honest, it is a little awkward to get into the first time around. But similarly to the Sideways Straddle, it’s all about taking it step by step.

First, get your guy to lie on his side, facing you. Next, you want to lie on your back perpendicular to him, because as the name suggests, we’re going to be making a cross here. (And no, you don’t need to be religious to do this one.) From here, you want to drape your legs over his hip, as you press your vagina against his pelvic region and open your legs a bit so he can get in there. It should feel like you’re sitting on his lap, but you're lying down ― if that makes sense.

Why It Works: In addition to getting you a gold star in the expert category, this one works because his limited “range of motion” makes him last longer, and the angle provides for ample clitoral stimulation. It’s perfect for guys who go from zero to 60 way too fast.

How To Do It: I’m of the belief that any position that requires standing is far from easy — not just because of the possibility of the height difference between you and your partner, but the whole balancing aspect. But you’re no longer a beginner when it comes to sex positions, so you need to shake things up a bit.

Start by standing up and facing each other. Next, have him lift one of your legs (you choose!), and rest it in the crook of his arm and off to the side. Next — and it might require lube to make it easier to get in there — he should penetrate you (while holding your body in place, because you are on one leg, after all).

Why It Works: Standing allow you to decide on how deep the penetration will be, so it’s a great position for when the guy has a large penis. In this position he can’t get deep enough to cause pain, but if you wrap your leg around him, pulling him in closer, you can create a deeper penetration on your terms.

More like this
GIRLI & Q Fell In Love At A Skatepark & Never Looked Back
By Jessica Morgan
13 Ideas To Add To Your Sex Bucket List
By Kristin Magaldi
Your Guide To Air Signs
By Brittany Beringer
Here’s Your Daily Horoscope For June 27, 2022
By Mecca Woods
Get Even More From Bustle — Sign Up For The Newsletter