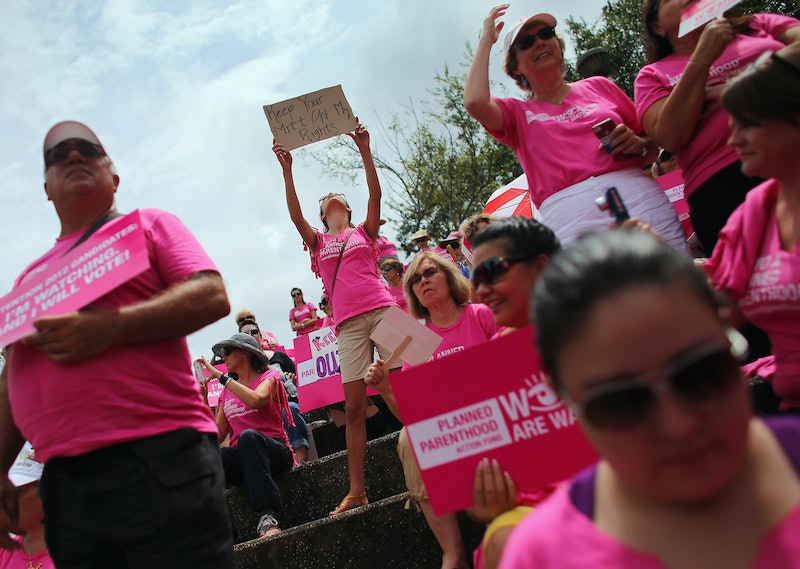 When it comes to access to birth control, Obamacare is certainly proving beneficial for women's reproductive rights. But when it comes to abortion care it’s already proving particularly negligent — even in the event of rape and incest. With so-called "rape insurance" legislation, Michigan is the latest state to prevent marketplace suppliers from offering abortion services as part of their insurance packages. Yet for some reason, it’s as if no one has noticed that there are 23 other states that have already legislated for the same restriction.

Michigan is being singled out for instructing women that they will now need to be a separate "abortion insurance rider" to cover them in the event of not only accidental pregnancy following consensual sex, but also sexual assault. An identical measure has already been vetoed twice in the state, and Michigan’s Republican legislator Rick Snyder has denounced this latest measure as going “too far”. But Michigan is merely following in the footsteps of eight other states including Florida, Arizona, and Pennsylvania who have already ensured that, as of 2014, marketplace providers’ insurance will not cover abortion in the event of rape or incest.

In the case of Michigan, the concept of top-up rape insurance is made all the more disturbing by Right to Life President Barbara Listing’s justification of the measure back in May: "It's simply, like, nobody plans to have an accident in a car accident, nobody plans to have their homes flooded. You have to buy extra insurance for those”.

Got that, women of MI? Rape is like a flood. Pre-destined. All you can do is make make preparations for it.

Of course, “rape insurance” is just the latest in a long lineage of restrictions to reproductive rights in the United States. Ever since the passing of the Hyde Amendment in 1977, which restricted federal funding for abortion except in cases of rape or incest, anti-abortion legislators have continually found ways to compromise the law. Prior to the Affordable Care Act, Kansas, Nebraska, Oklahoma, and Utah all enacted restrictions for women purchasing any kind of private insurance.

But Ohio really takes the punitive biscuit. Besides previously banning all private insurance from covering abortion in the event of rape and preventing public hospitals from making transfer agreements with abortion clinics, Ohio has now banned the option to purchase a rider as well.

Of course, restricting insurance provisions is just another assault on reproductive rights, albeit one where pro-lifers can claim that they are merely protecting the terms of the Hyde Amendment — not preventing abortion access per se (apart from in Ohio). It also happens to make private abortion care extremely lucrative.

But these restrictions don’t just affect women who've faced rape or incest. The continued reinstatement and extension of abortion and insurance terms means many women are confused as to just what their abortion rights are in any circumstance. According to a Women’s Health Issues journal study, 45 per cent of insured women paid for their own abortions because they didn’t know whether their policies would cover it.

With bills ranging from $300 to $10,00, we'd hoped our pro-choice president would have tried to pass legislation that didn't provide states with this loophole.

More like this
6 Organizations Fighting Police Brutality That You Can Support Right Now
By Syeda Khaula Saad and JR Thorpe
15 Black-Owned Liquor & Wine Brands To Add To Your Bar Cart
By Alexis Morillo
24 History-Making Black Women You Probably Didn't Learn About In School
By Ayana Lage and JR Thorpe
These Artists Are Reimagining Black History Month To Create A Better Future
By Katie Mitchell
Get Even More From Bustle — Sign Up For The Newsletter
From hair trends to relationship advice, our daily newsletter has everything you need to sound like a person who’s on TikTok, even if you aren’t.