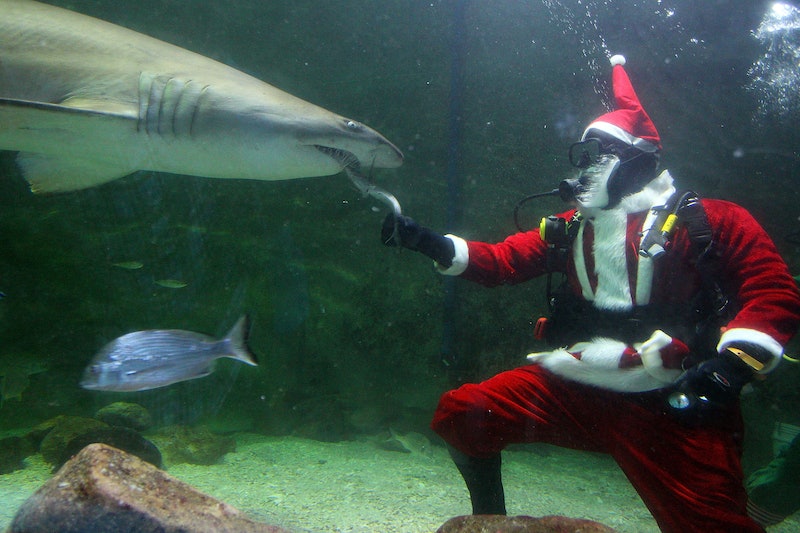 "The way Americans celebrate Christmas present is rooted in Christmases past," according to Pew Research Center. A new survey from Pew's Religion & Public Life Project looks at Christmas customs in America and how they've been shifting. According to the survey, an overwhelming majority of adults in the United States (92 percent) celebrate Christmas. And despite "war on Christmas" hysteria, 51 percent say they personally view Christmas as "more of a religious holiday" than a cultural holiday (about a third say cultural holiday and tenth say both or other). Here are 10 more findings about how Americans plan to celebrate the holidays in 2013:

A total of 86 percent of U.S. adults say they intend to gather with family and friends on Christmas eve or day this year (the same number of people who say they plan to give gifts to family and friends). About 90 percent said they did so as kids.

Though 81 percent of adults say their families sent holiday cards when they were children, only 65 percent plan to do so themselves this year.

Gen Y is more skeptical about Mary being a virgin when she gave birth to Jesus. While an equal amount (76 percent) of older adults, boomers, and Gen X-ers believe the virgin birth story, only 66 percent of Millennials are buying it.

About 70 percent of Americans say they typically attended Christmas Eve or Christmas Day religious services growing up, but only 54 percent say they plan go this year.

While 66 percent of adults 65+ celebrate Christmas as a predominantly religious holiday, only 39 percent of those 18 to 29 years old do. Millennials are also less likely to go to church on Christmas Eve or Day.

6. Up On the Rooftop

Yes, there is a Santa Claus in a lot of adult-only households. Among adults with no kids at home, about a fifth still pretend that Santa visits their home this year (whatever that means).

A total of 79 percent of people plan to put up a Christmas tree this year (92 percent said they did so as kids).

A total of 58 percent of Americans say they plan to give homemade gifts such as baked goods or crafts this year, as 66 percent said they did as children. Women were more likely than men to be giving homemade gifts (65 percent vs. 51 percent).

Among the "religiously unaffiliated," 87 percent say they still celebrate Christmas.

Even among those who say they don't personally celebrate Christmas, 51 percent will get together with family or friends on Christmas Eve or Day.

More like this
Why You're Seeing Green Bandanas At Abortion Rights Protests
By Lexi Inks
13 Summer Solstice Quotes To Celebrate The Longest Day Of The Year
By Sadie Trombetta
How To Come Out Online, According To Trevi Moran
By Melanie Mignucci
Jujubee’s Humble Reminder
By Sam Ramsden
Get Even More From Bustle — Sign Up For The Newsletter