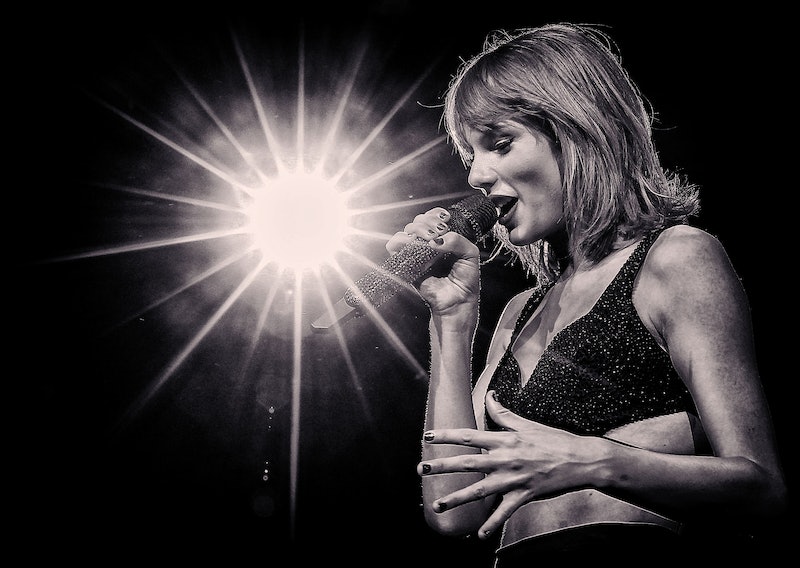 Just weeks after her many MTV VMA wins, there's more big award news for Taylor Swift: aka, Emmy winning news. According to EW, the "Blank Space" singer won the Original Interactive Program Emmy for her phone app, AMEX Unstaged: Taylor Swift Experience. Of course, her reaction was priceless: Swift took to Twitter with a billion celebration emojis, along with a message indicating she didn't believe the news at first. This is no surprise, though: This year has proven to be the year of the Swift, and yet, she never ceases to be surprised and excited when she gets these major accolades.

Shocked, confused, and excited, T. Swift didn't know what to say when she saw The Hollywood Reporter's announcement on Twitter. Her reaction was hilarious, and quite frankly, a reaction that any one of us would have if we were in her position. Her excitement was radiant, and she has once again proved that no matter how famous you are or how much of a superstar you become, life always has a way of surprising you.

This isn't the first time that this pop star has had an animated reaction to something amazing happening in her life. She's never afraid to come off as "uncool," and it's evident across her social media.

Here are seven other times that the "Bad Blood" singer has been so excited that no number of emojis could help convey it:

1. When She Fangirled Over Troye Sivan

When newcomer Troye Sivan released his EP "Wild" last week, his fans went wild. Little did he know that Swift was a member of his growing flock of admirers, though: Swift went all-caps to display her totally relatable excitement.

2. When She Fangirled Over Her Performance With Fetty Wap

Hey, what's up, hello! Once again, with the all-caps raging, Swift showed that she too was obsessed with Fetty Wap and probably was guilty of singing and dancing to "Trap Queen" in her dressing room. She carried her excitement from their performance to her Twitter, and was clearly still buzzing.

3. When She Had Major #TBT Feels With Old Pal Nick Jonas

Ugh, this warms my fangirl heart. Swift knew exactly what we were all feeling here when she brought her long time bud Nick Jonas on stage during one of her 1989 tour stops. The feels, the feels!

You can practically feel her excitement. Soon after these women took home the big World Cup, Swift asked them to join her at another one of her shows and brought them on stage. Her speech was cute, and their pics were goals.

5. When Her Besties Cara Delevigne And Mariska Harigitay Joined Her On Stage

We've all had those moments that we can't even describe and have to question whether or not even happened in the first place. Clearly, this was one of those moments for Swift.

6. When Zendaya Graduated From High School

Graduation is an emotional time — even when it isn't yours! The "Blank Space" singer was very emotional when her younger pal and fellow "Bad Blood" co-star traded in her cap for a diploma, and it was adorable.

I mean, I would have been excited too if my kickass video beat the 24-hour VEVO record.

It's OK to let your excitement run wild on Twitter every now and then. Swift makes it a point to get a little cray once in a while. But who could blame her? With her exciting life, it's expected.