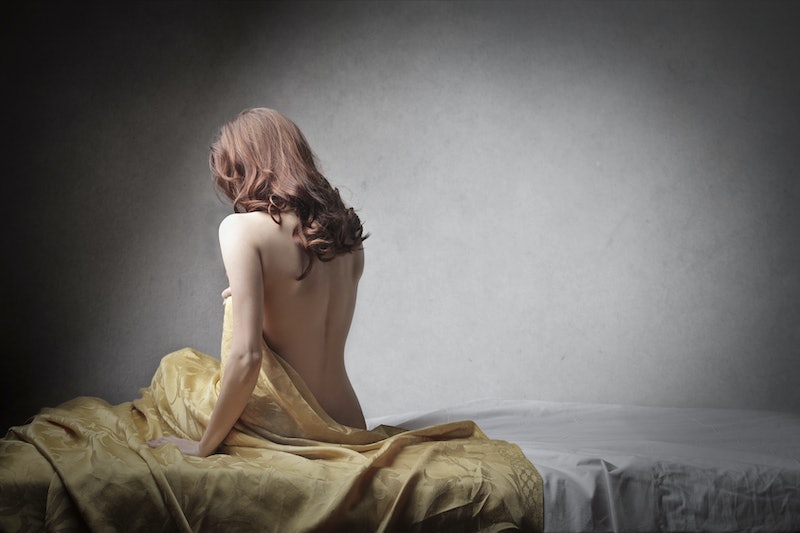 For all the awesomeness that sex provides, there can also be some downsides. For example, it can sometimes be messy and smelly, because you never really know what’s going on in the genital region (especially after a long day). It can also be sweaty, awkward, bizarrely funny, and on those occasions when things really go awry, embarrassing. But besides all the gross things that happen during sex, some of which are out of our control, there are also some pretty annoying things that happen.

Honestly, when you’re about to have sex, you never really know how it’s going to play out, especially if you're with a new partner. But you still go for it, hope for the best, and cross your fingers that at least one orgasm will come your way.

Sure, you may not be able to control the random queef or a rogue period that decided to show up mid-sex and join the party. But you can control things like not coughing in your partner’s face, or not looking legitimately bored (because, oh I’m sorry, do you have something else you’d like to be doing right now?). Where are your damn manners?

Because we’re all guilty of doing something during sex that could easily be categorized as “the worst,” but we may not have realized it, here are 21 awful, jerky, horrible examples.

1. Checking Their Phone When They Get A Text

Whether it’s a text or a phone call, it can wait. It’s bad enough when people check their phone on a date, but mid-sex? Come on. Anyone who does that is basically saying that they’re not very present in what’s going on between the sheets.

2. Subtly Glancing At The Time (But Not Subtly Enough)

If you want to convey to someone that you’re bored, and you haven’t gotten a text message that you can check to do so, you can always glance at the clock. But why would you do that? Why would you want to make someone feel so awful about themselves? Anyone who checks the time during sex deserves for that sex to come to an end, stat.

3. Acting Annoyed That It’s Taking A Little While For Their Partner To Orgasm

Not everyone can orgasm so easily. In general, it takes women about 15 to 20 minutes to orgasm, and that’s not even counting the 25 percent of women who just can’t through vaginal intercourse alone. But whether your partner is a man or a woman, if you’re going to be annoyed that you have to put in a little extra effort for them, then you're being a jerk.

4. Sneezing Or Coughing In Their Partner's Face

Yes, these things happen during sex. But if you feel a sneeze or a cough coming on, it’s your responsibility to turn your head so your partner doesn’t get that all on their face. Gross.

In referencing an ex’s technique during sex, you’re doing two things. 1) You’re comparing what your ex did to what your current partner is doing, which is beyond not cool. 2) You’re being rude.

6. Having An Orgasm First, Then Not Giving A Damn That Your Partner Is Left High And Dry

Sex is a give and take! Unless you have a sub/dom situation in which the dom decides when the sub will orgasm because it's their agreement, then it's your responsibility to give back to the person who just gave to you. It’s basic math.

7. Not Shutting The Eff Up

It’s one thing to talk dirty or to check in to make sure your partner is enjoying themselves, but it’s another to talk and talk and talk. Your partner is probably just as concerned as you are about Donald Trump possibly becoming president, but the bedroom isn't the place for that discussion.

8. Being Totally Lazy And Acting Like A Dead Fish

I once dated a guy who would literally just lie there every single time we had sex, as if it was my job to totally cater to him. It was awkward just how lazy he was, just lying there on his back, not moving or doing much of anything. Needless to say, it didn’t last long.

9. Not Saying Anything At All

Because sex (especially great sex) is about communicating and giving your partner some sort of hint as to what’s going on, silence during sex is a total mood killer.

Everyone loves compliments! But it’s when you start complimenting too much that things can get weird for the other person. For example, saying “You’re so hot and sexy,” is good complimenting. Saying, “I’ve always dreamed about being with someone who’s so hot and sexy like you, but I never thought it would happen. I’m so happy I get to be with someone so insanely gorgeous,” is a bit too much.

Unless you’re in a committed relationship in which birth control methods have been discussed and decided upon, arguing about condom use is pretty much the worst thing one can do during sex. It’s not only kills the mood, but it can also make you paranoid about how many people this person has had unprotected sex with.

If you don’t like what your partner is doing, then tell them. It’s really childish to make a face when something is a bit off instead of communicating that you’d prefer something else.

13. Getting Insulted By Feedback And/Or Direction

Feedback is the name of the game when it comes to sex, and in no way reflects on your technique or skills. Everyone is different when it comes to what turns them on and gets them off, so getting upset that your partner is just trying to help is really immature.

14. Calling Out The Wrong Name

Yes, we are all guilty of forgetting the name of that occasional one-night stand. So to be safe, it’s always best to just yell out, “Oh, yeah!”

15. Not Getting Consent To Do Something A Little Different

Remember Pretty Woman? Remember why she didn’t kiss? Because it was too intimate. If you’re with someone and you don’t kiss them, it definitely comes off as insulting, because it conveys that you either don’t want to or find them dirty in some way. If you’re going to bed with someone and they want to kiss you, then kiss them back.

17. Pushing Someone’s Head Down As A Way To Initiate Oral

I’d like to think that this behavior stopped when we graduated from high school, but I fear that for some people, it’s the only way for them to express that they want oral sex. Nope. Don’t do It’s never OK to go about it that way.

Foreplay gets us nice and wet for the main event, and the longer it's extended, the easier it can be for us to orgasm. Rushing it is just a total bummer, and unfair. If you have no place to be, then take your time and enjoy it.

Fact: Sometimes there’s blood from a period that just ended, or funky smells, or unexpected bodily fluids. Whatever it is, it’s not worthy of an “ew.” Saying that will just make your partner feel bad and that's just mean.

20. Farting And Not Apologizing (Or Passing The Blame)

People occasionally fart during sex. It has happened to the best of us. So when it does, it’s important to apologize and have a quick giggle, as opposed to treating it like the elephant in the room. Also, don’t pass the blame. Saying, “It wasn’t me,” when it totally was just makes the person you’re with feel self-conscious. Own the fact that you farted, people.

First of all, faking an orgasm it is a huge disservice to yourself. Secondly, it’s huge disservice to your partner, because you’re lying to them — and if they’ve had enough sex in their life, they can tell when you’re faking it, anyway. Faking it is unfair to everyone involved, and while great sex doesn’t always have to end in an orgasm, it definitely shouldn't end with either one of you lying about having climaxed.