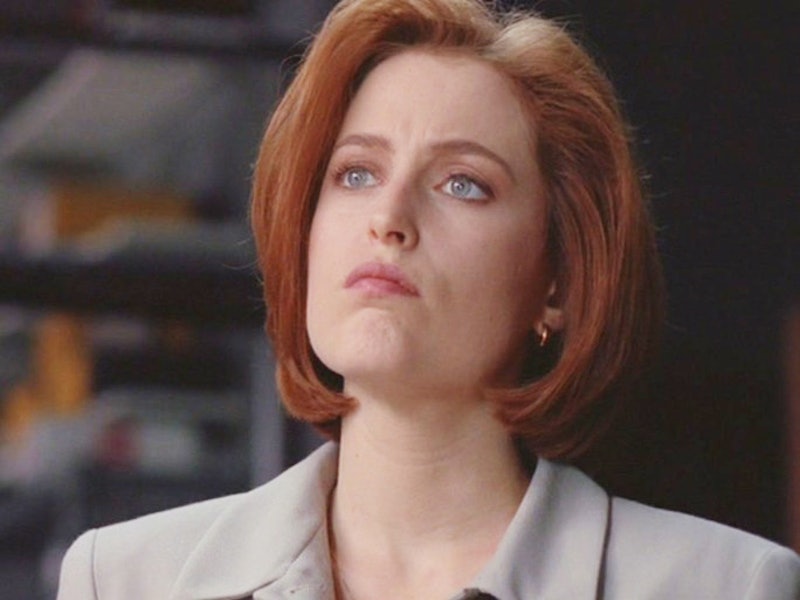 Let's face it, you're either excited, scared, or both about the upcoming reboot of The X-files . I mean, I'm not only concerned about the paranormal horrors that our protagonists will encountered, I'm concerned about the state of their relationship. Will Mulder and Scully make it work? I want to believe. But I think it's safe to say that single or partnered, Special Agent Scully is probably still as strong and badass as she ever was... and I put together a Dana Scully gif retrospective so you too can channel her strength and baffled expressions.

See, maybe you'll never have perfectly coiffed flaming red hair, and it's unlikely you'll ever get your life together enough to get recruited by the FBI. Hell, it's hard enough getting through the daytime manager shift at H&M without a macchiato the size of your head, am I right? But you can still connect with Scully through her adorably expressive face, and leave all the too-scary drama of abductions and horrifically deformed incest families behind.

Yeah, it's maybe fair to say that not every young woman can handle the traumas of the X-files, even with skepticism wielded as a weapon. Still, I matched up these Scully gifs with your average, everyday, non-alien situations, so it's almost like you two are the same person. Enjoy!

1. When Your Friend Dares You To Eat Something Gross

You think I won't have those oyster shots?

2. When The Barista At Starbucks Compliments You On Your Nail Polish

OMG, thank you, it's Vampsterdam. It took me like a hundred hours to get the purple stains off my fingers but I'm really proud of the end results.

3. When Your Friend Tags You In An Unflattering Photo From Last Night

No joke, we took dozens of group shots, and you're gonna post the one where I have six chins?

4. When The Woman In Front Of You In The Express Lane Has Way More Than 10 Items

You just want to buy tampons and piece out and this MONSTER brought a whole shopping cart over. My God.

5. When You Get Carded At The Bar Even Though You're In Your Deeeep 20s

You're kind of smug about the fact that the babyface that burdened you as a teen can now produce bragging rights. Although, maybe they just saw your Spongebob wallet and thought that you had to be a literal child.

6. When It's Dead Of Winter Winter And You're Trying To Look Sexy On a Coffee Date.

But that just means unleashing your power cardigan.

7. When It's Now 2 A.M. And You're Regretting That Late Night Injection Of Caffeine

Whatever, you have to be up for work in four hours, it's fine.

9. When Your Very Sick Friend Offers You A Sip Of Her Drink

Girl, if you knew you were dying of consumption we could've rescheduled Houlihan's night.

10. When Someone Charming At The Bar Let's You Bum A Cig

Thanks for fostering my life-threatening habit, handsome stranger.

11. When It's Six Drinks Later And You've Convinced Yourself You're Mae West Incarnate

Never mind the fact that, sober, you can't look a guy without stammering.

12. When Your Boss Asks If You Can Stay Late

Even though you're coming down with your friend's hideous cold and will probably die mid-shift.

13. When Your Crush Catches You In Your Least Sexy Pair Of Glasses

The one day you choose to brave Trader Joe's without your contact lenses.

14. When You're Not Sure If He Wants To Kiss You Or You Have Lipstick On Your Teeth

This is really a bad day for beauty overall.

15. When Your Dad Asks If You Want Pizza For Dinner

Um, have you met me?

16. When Your Friend Is Passive Aggressively Ignoring Her Boyfriend's Texts

I know we hate Steve for talking to Alyssa, but either turn it off or work it out because you're ruining wine and New Girl night.

Even though the X-Files has been over for 13 years, and the reboot has not yet happened, Dana Scully still understands us. And that's what makes her such a timeless role model.