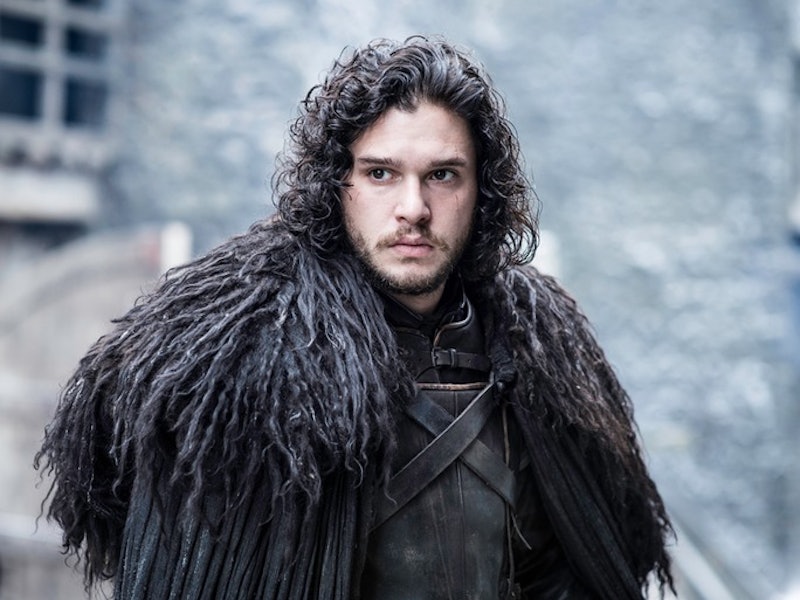 The winds of winter have blown in a major Game of Thrones Season 6 spoiler, and, if you don't want to know, then ye gods, turn back now. According to Watchers on the Wall, Kit Harington was spotted filming a Game of Thrones scene in Northern Island. That's right, if the source is correct, then Jon Snow is back for Season 6 and taking part in a major battle for the North. The scene is also said to include the Umbers (the family that is supposed to be harboring Osha and Rickon), the Boltons, and the Wildlings. The battle is rumored to be in — wait for it — episode nine, historically the most exciting and expensive episode of any Game of Thrones season.

It is OK if you need a second to process this information. With no books to draw on, fans have been left grasping for the slightest hint of a clue about the fate of Jon Snow. Now there's more than a clue; there is a spoiler of epic proportions that still leaves plenty of unanswered questions, like how did Jon Snow survive a deadly stabbing by his Night's Watch brothers. Did he survive at all? A resurrection is just as likely, and, if Jon is resurrected, then the Azor Ahai prophecy may finally have come to pass. However, I have a feeling there could be more to the story.

I know this is going to sound crazy, but given the battle is in the North, could it be possible that the Game of Thrones writers have decided to combine Lady Stoneheart and Azor Ahai to form Lord Stoneheart, A.K.A., the resurrected Jon Snow? Resurrected by Melisandre and betrayed by his brothers, perhaps the reanimated Jon takes the wildlings North to seek vengeance on all those who have harmed the Starks. Previous casting notices revealed the show is casting an expendable Frey to be dispatched quickly, and a group that sounds suspiciously like a revamped version of the the Brotherhood Without Banners. These two casting notices taken together led me to previously speculate that Lady Stoneheart would finally come to Game of Thrones , but what if Jon is the mysterious figure in the North?

This could be a major game changer for the show. How epic would it be if a resurrected Jon takes it upon himself to leave the Night's Watch and begin a campaign to reclaim the North for the Starks by killing all those who have harmed his family? Stark loyalists would line up behind him, as would the wildlings, which would lead to a season of all out war in the Riverlands and the North — and, if it starts slow with just a small band of men and perhaps a Jon in disguise, then the mystery element could be preserved. Remember, anyone who receives the kiss of life is never the same, so Jon as the fans know him truly would be dead. And yet his essence would remain.

There's one more wrinkle to this situation. In order for Jon to be the chosen one every Game of Thrones fan knows he is, then R + L = J needs to be true, and Jon should by all rights turn out to be Azor Ahai. Enter Sam. Jon's bestie is heading to Old Town for his maester's training in Season 6. What if, by the end of the season, Sam reunites with Jon and uses his new maester skills (hey, Sam always did want to be a wizard) to reawaken his friend and set Jon on the path toward his true purpose: saving Westeros from the oncoming wights?

This could be a way for Game of Thrones to have its mythology-laden cake and to serve up a slice of Stoneheart too. All theorizing aside, no matter what happens, it is all but confirmed that Jon will be in the midst of a serious battle in Game of Thrones Season 6. Get ready, fans, Snow is coming.