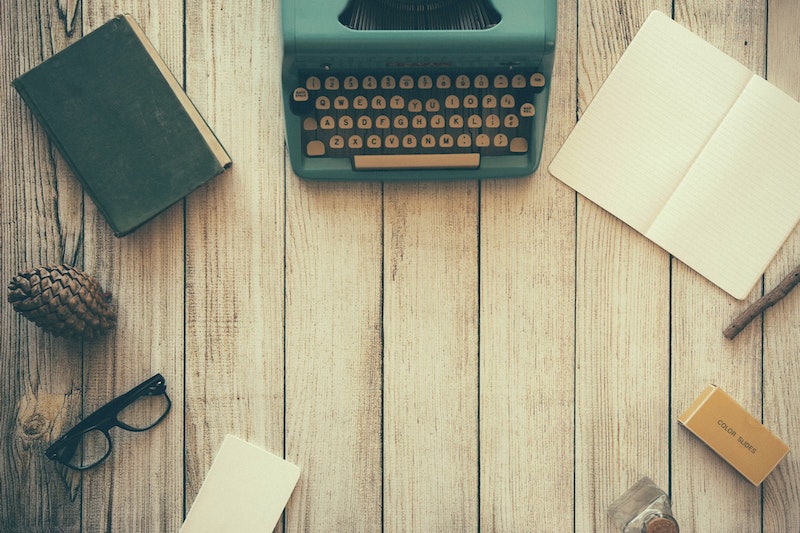 Real talk — when I first told my mom that I wanted to be a writer, she wasn't too thrilled, to say the least. Her concerns included, but weren't limited to: "How are you going to make any money to live off of?" "What are you going to do with your time? Just...write?" "Oh my god, you're just going to be holed up in a tiny apartment doing nothing but drinking endless cups of coffee and just bashing at your laptop." Now, I love my mom, and she supports me 150 percent in whatever I do. But I understand why she, along with the parents of any budding writer, would be, shall we say, less than enthusiastic, about their children pursuing writing as more than just a hobby. Even the most famous writers didn't hit the big time right off the bat, despite how talented they were/are. So it's true: being a writer isn't the safest or the most practical path to follow.

But believe it or not, the skills and habits that I picked up during my four years as an English/Creative Writing major have come in super handy now that I'm out here in what is known as the "real world." While I admittedly chose to be a writing major in the first place because I love to read, I quickly realized that writing required a lot more than "just writing." All those stereotypes of writers living in a dingy little flat hammering away on their typewriters with no human interactions whatsoever are false because 1. No successful writer actually does their writing on a typewriter, and 2. Good writers get inspiration from the world around them, and there's really not much of a world to be inspired by in a dark little apartment.

Choosing to be a writing major was and still is one of the best decisions I've ever made, not just because it's my passion, but because it's honestly helped me grow as a person. Despite what people say, it's not a completely useless major, it will help me out in the real world, and it does require more than just making things up. Here, the 9 reasons why writing majors are best prepared for the "real world":

You Learn How To Take Criticism

Whether it’s in a writing workshop when you’re starting out, or in public reviews once you’re a published writer, writers have to deal with criticism. It’s just part of the job. But what’s more, you have to discern the helpful critics from the overtly praising ones or the, to put it frankly, haters. While it’s our first instinct to defend our work when anyone criticizes it, writers have to learn from the start how to suppress that instinct, instead listening to and using criticism to improve their work.

Sure, when it comes to your college classes, you’re forced to write so that you can graduate. But apart from that, no one is really going to make you write, so that responsibility falls on you. When you’re done with college, no one is going to make you write at all, so if you still want to be a writer, then you have to be constantly writing and submitting your work to places with little to no prompting from others.

You Learn To Let Go Of Perfectionism (To A Degree)

One of the best pieces of writing advice that I’ve ever gotten and that I will live by for as long as I write is the Patrica Hampl quote “A careful first draft is a failed first draft.” All writers know that it will never be perfect on the first try. They also know that it won’t be perfect on the fifth, 20th, or even 30th try; Jean Rhys was unhappy with the masterpiece that is Wide Sargasso Sea because she believed that there was a “then” and a “quite” that were unnecessary. There’s always going to be one more edit that we can make, regardless of how many drafts our work undergoes. When you start out as a writer, you have to quickly face the harsh truth and learn to accept that your work will never be completely finished or perfect.

You Learn To Let Go In General

There's a lot of (metaphorical) killing involved in writing, but that's a good thing! Regardless of your genre of writing, you’re never going to be able to keep everything you want to keep. There are going to be phrases or characters or big chunks of drafts that won’t make it into the final piece. And you have to be OK with that. Or sometimes you work on a piece for a very long time and even after multiple drafts, it’s just not…right. And then you have to let go of that as well. Writers have to accept that not everything they write will be good, and they have to learn when to stop beating a dead horse.

You Have To Make Tough Decisions

You’re going to have to make a lot of tough calls in life, and luckily, writers get used to that early on in their careers. Sure, the kind of decisions that they make about their work probably won’t impact their life as seriously as some of the other more “real world” decisions that they'll have to make, but the point still stands that writers are accustomed to making choices.

You Work Well Alone And With Other People

A lot of people think writing is a solitary hobby, and it sometimes is, but not always. Writers are always interacting with other writers to talk about each other’s writing, or someone else’s writing, or just writing in general! Additionally, writers need to get out there and be with other people and actually experience life in order to have fresh ideas to write about. Good writers are the ones who are constantly reading and discussing while they're writing.

You're Organized (Even If No One Else Thinks So)

Even the seemingly haphazard writers have a system that might not make sense to anyone else, but that works for them. The fact of the matter is that when you’ve been writing for a while, you need to keep track of things. Whether it’s the particulars of one specific story, or just topics that you’ve already covered, or even places that you’ve submitted your work to, all writers have their own system(s) of organization that can also be applied to other aspects of life.

You Push Through The Slumps

There’s a reason it’s called “writer’s block” and not “—insert name of any other occupation—'s block.” All writers go through multiple patches throughout their career where everything they put out just sucks. And when that happens for the first time to a new writer, it makes you question the legitimacy of everything you’ve ever written ever. But all good writers know that you have to push through those periods and just keep writing with the confidence that you are good at this and that what you produce during this time doesn’t define your overall abilities as a writer. And that’s a skill that comes in handy when you’re going through tough times in life.

When It Comes To Your Future, You’re Focused, But Also Patient And Realistic

No one leaves college thinking that they're going to immediately publish a bestseller and have an awesome rest of their life (and if you do, then I've got news for you, kid!). All writers know that it’s going to be a long and hard journey before they “make it.” Which is why so many writers take other jobs while they’re writing; it’s not because they’re not committed to their passion, but because they’re realistic about the fact that just writing will probably not provide them with the financial means to eat and live under a roof and all that nice stuff. But through it all, we stay focused on our goals and patiently pay our dues until that point in our life (that is hopefully VERY NEAR) where our main job is to just write.

More like this
The 'Firefly Lane' Book Ending Teases Way More Tears To Come In 2023
By K.W. Colyard
'Bridgerton' S3 Teases Exciting Social Season For Penelope Featherington
By Bustle
The 'Lady Chatterley's Lover' Book Leaves Us With A Troubling Question
By Catharina Cheung
What Is Harry & Meghan's Net Worth? They're Richer Thanks To Their Netflix Doc
By Hugh McIntyre
Get Even More From Bustle — Sign Up For The Newsletter