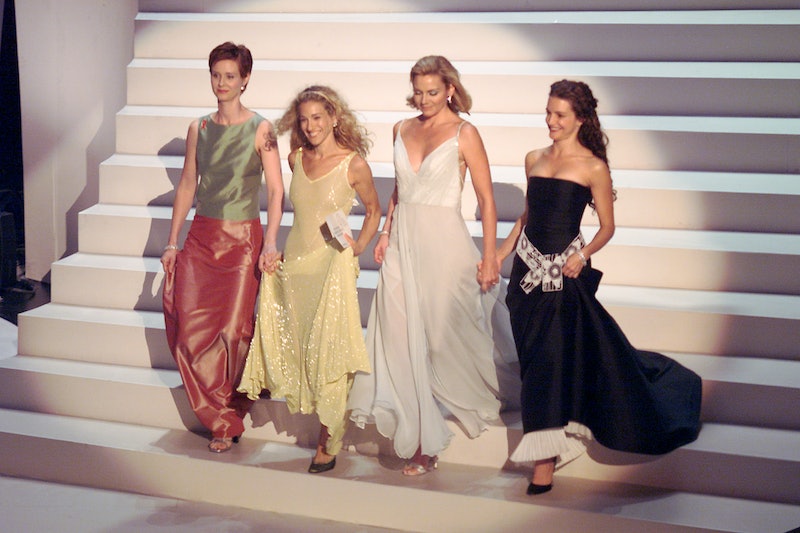 The 2015 Emmys are sure to be the most delightful mix of comedy, our favorite celebs, and tons of drool-worthy red carpet couture. What the September 20 awards will be missing, however, is the cast of Sex and the City on the Emmys red carpet. Not only were Carrie Bradshaw's outfits a reward in and of themselves and worth tuning into the show for each week, but the actual women of SATC truly took over every single red carpet they were on.

While there are plenty of great TV shows with epic costumes, tons of great accessories, and that feature very fashionable stars, there was arguably no show that embraced all things sartorial like the groundbreaking HBO series did. It wasn't just the program itself that was on trend either, but its leading actresses. I mean, it's almost comical to look back on the outdated outfits from Sex and the City , but the women's IRL styles? Never.

The women who gave life to those four characters have always been just as (if not more) fashionable than their fictional counterparts. They've served up so many sizzling looks on the Emmys red carpet over the years, in fact, that it's worth taking a trip down memory lane. After all, the women of SATC perennially dominated all the best-dressed lists.

Here are just nine of the best Sex and the City Emmys looks.

1. The Pink, Fluffy Dress That Was So Carrie

This masterpiece by Oscar de la Renta that SJP wore in 2000 harkened to Carrie's ballet-inspired look in the show's title credits, but in a more refined and decadently glamorous way.

Sending the show off in style at its last Emmys in 2004, Davis stunned in this structured and sultry Prada gown. Charlotte would be so scandalized.

Seemingly as unabashed and fond of celebrating her body as Samantha, Cattrall completely stunned the crowd in this body-skimming and curve-flaunting Hervé Léger dress. Cattrall told The Kit this was her "favorite red carpet moment," and I'm very inclined to agree.

Nixon wore this stunning red empire waist gown for her (soon-to-be) baby's first Emmys in 2002. Redheads in red is one of my favorite fashion rule to see broken.

If you're going to go glamorous, you'd better be willing to go all the way, which is exactly what Cattrall did in her cutout Armani gown in 2003. While the dress attracted some haters at the time, cutouts are huge in 2015. So it looks like Cattrall was just before her time.

At her first Emmy's appearance, SJP wore the look that let us know she was going to be one to watch out for. This banana-peel yellow paired with her wild curls made for a perfect mix of carefree and chic.

Kim Cattrall looked stunning for her last walk down the red carpet as an SATC cast member. This bead and feather embellished gown was just the right hue of pink for the blonde bombshell, and the intricate details made this dress stunning to look at.

9. Back To The Start

SJP's dress at the 2004 Emmy's was shockingly similar to her pink gown in 2000. Perhaps she was making a statement about the show's end while paying homage to its beginnings? Either way, she won the award for Best Actress in a Comedy Series and so many fashion points in this Chanel gown.

Many Millennials' relationship to SATC is complicated at best, but what most of us can agree on is this: These women know how to wear clothes.