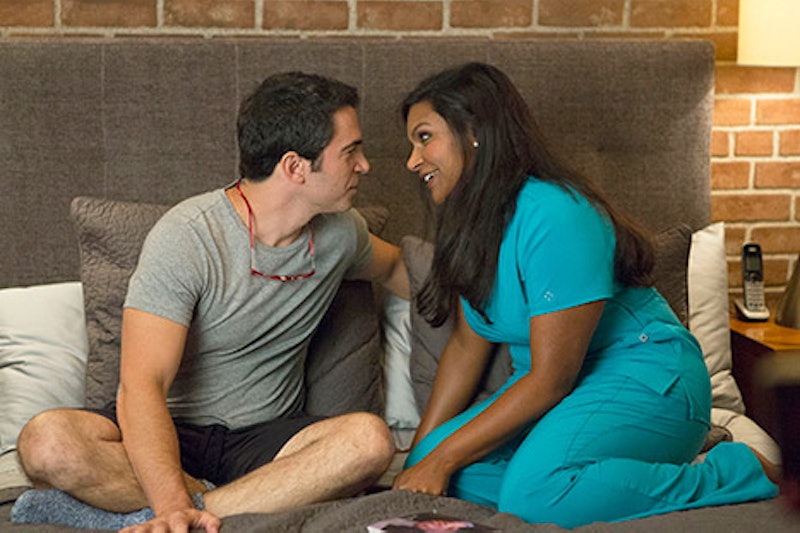 The desire to watch fellow creatures getting it on has existed since at least the time when cave people introduced the fine art of sexy cave drawing, and definitely before any rumor started about a Kylie Jenner and Tyga sex tape.

Aside from the fact that I'm paid to watch people's uncensored sexy times all day — Hi, mom! — one of the most rewarding and initially unexpected pleasures my chosen career has brought me has been learning how valuable it can be for couples (and singles) to have access to videos that show real people having the sex they have in their everyday lives. At a private screening before MLNP.tv went live, a man in attendance who had just finished watching a video by one of our MakeLoveNotPornStars said, "When I watch porn, I want to jerk off. When I watch #realworldsex I want to have sex with my girlfriend."

How cool is that? A video of two regular people having sex had turned this guy on, and instead of making him want to go furtively rub one out, it made him want to share pleasure with another human being. That, plus he didn't have to experience what I like to call a "porn hangover," where once he'd had his orgasm, he suddenly experienced a rush of sexual shame followed by concerns about what he'd just watched. Were the actors in the scene consenting and properly paid? Was it ethically produced? Was that screaming orgasm in the middle real? Did it matter to him that the orgasm was probably fake? Was there something wrong with him?

MakeLoveNotPorn is pro-sex, pro-porn, and pro-knowing the difference. At MLNP, we believe that #realworldsex is the hottest sex there is and that there's nothing amateur about it. We want people to understand the differences between #pornworldsex and #realworldsex because we've intimately experienced the confusion and disappointment that can occur when you don't. That said, shaming people for watching and enjoying porn is so not on the menu and the example above could just as easily feature a woman or a person of another gender. We've created a space online to celebrate an entirely new category of sex video — the #realworldsex video — and we're thrilled to report that people from all over the world are checking it out!

What my role as Madam Curator has taught me is that regardless of gender, sexuality, age, ethnicity or relationship status, watching #realworldsex is great for your sex life. So long as you talk about it first, and everyone is consenting every time, exploring the age old art of titillation by sex video is something that can be fun, hot, and very likely to translate into better sex IRL. So, here is exactly how watching #realworldsex will improve your sex life.

1. It Helps You Get Fully In The Mood

Even if the thought of having sex is super appealing in theory, your body (and brain) might sometimes still need a bit of extra help getting fully turned on. According to The New York Times, researchers in the field of sexuality are currently all about the concept of responsive desire — the idea that women in particular experience, "arousal first, then desire." Feeling like you could be down-to-clown-around but not ready to rip off your clothes and swing around your bedpost, like in some kind of Beyoncé-at-home fantasy? Treating yourself and your partner to a bit of visual foreplay by watching a #realworldsex video will rev up your desire and increase your physical arousal — both things that will lead to better orgasms.

There's nothing quite like having a visual example right in front of you to help communicate what you currently like in bed, what you'd like to explore, and even what you don't like, too. For example, watching a real couple have romantic anal sex (it exists!) might turn you on but that doesn't mean it's on the agenda for date night. Avoid the trap of thinking that enjoying seeing someone else do something sexually means you've sworn a blood oath to try it yourself, and instead use it as an opportunity to say to your partner, "They seems to be really loving that! Not sure it's for me right now but maybe I wouldn't mind you using a finger or tongue there, etc, etc."

3. It Teaches You That The Same Awkward Stuff Happens To Everyone During Sex

4. It Helps You Feel More Comfortable With Your Real World Body

Spoiler alert: how you look actually has no bearing on how much you can enjoy sex and sticking to sex positions that hide your perceived flaws won't help you have better orgasms. That said, seeing folks who look like you having mind-blowing sex will boost your confidence, and lead to being less in your head, making you much more likely to enjoy every minute of harmonious humping.

5. It Boosts Your Creativity During Sex

7. It Might Inspire You To Make A #realworldsex Video Of Your Own

Once you and your partner have had your brain, heart, and loins treated to the #realworldsex equivalent of dinner and a movie by watching real people go at it, it might not be too long before you start elbowing each other mid-viewing saying things like "hey, maybe we could do that," and "I wanna tape us together and watch it back later, the idea turns me on so much, ooh baby yeah!" Or something like that. Once you've experienced the confidence and communication boosts that come along with watching real human intimacy, you could even be hit with an urge to share your love with the world.

At MakeLoveNotPorn.tv, we've been thrilled to hear over and over again how the whole process of making a #realworldsex video — from talking about it, to having sex and filming it, to editing it, to watching it back later — has led to more, better sex.

More like this
Daryl McCormack On His Unusual First Audition With Emma Thompson
By Olivia-Anne Cleary
What’s An Open Relationship, Actually?
By Lexi Inks
Chrishell Stause & G Flip Have “No Rules Or Regulations” In Their Relationship
By Brad Witter
Kendall Jenner & Devin Booker Reportedly Broke Up After 2 Years Of Dating
By Jordyn Tilchen
Get Even More From Bustle — Sign Up For The Newsletter