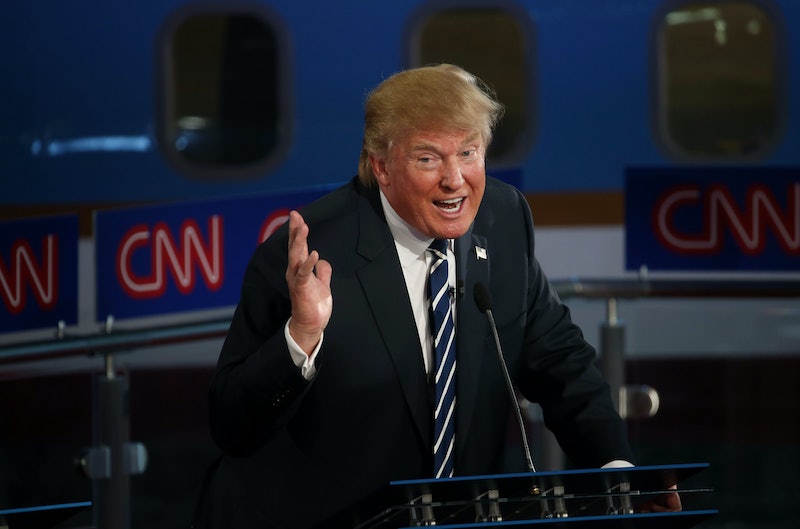 Here's a question for you, dear readers. How long does it take for Donald Trump debate memes to take over social media? Well, not very. Despite his recent efforts at playing nice, it wasn't long before Trump began sparring with his fellow candidates and swooping about his infamous head of hair. To no one's surprise, the Internet took notice and launched a series of LOL-inducing memes.

And now, more than ever, Americans need a reason to laugh at this particular candidate. Although many made jokes about Tump's presidential run, the former host of The Apprentice has quickly become the most popular Republican in the presidential field. According to a new CNN/ORC poll, the mogul is pulling ahead in the polls, with 32 percent of people surveyed saying that they'd vote for Trump. It's scary to think that we may seem this man's name on the ballot come November 2016.

But that doesn't mean that the world has stopped finding humor in Trump's attempt to take over the country. Because, no matter how serious people may take him, he is sure to say something sexist, racist, and/or downright stupid. And as Americans, we are sure to turn his actions into laughable art. Just take a look at some of the hilarious Trump memes spawned by the second GOP presidential debate.

More like this
YouTuber Runs Into Margaret Sanger’s Grandson While Filming
By Alexis Morillo
What Is A “Softboy?” The TikTok Term & Aesthetic, Explained
By Courtney Young
Why Are TikTokers Slapping Each Other With Tortillas?
By Courtney Young
Coastal Granddaughter Is The Latest Summer Aesthetic Going Viral
By Emma Garza
Get Even More From Bustle — Sign Up For The Newsletter