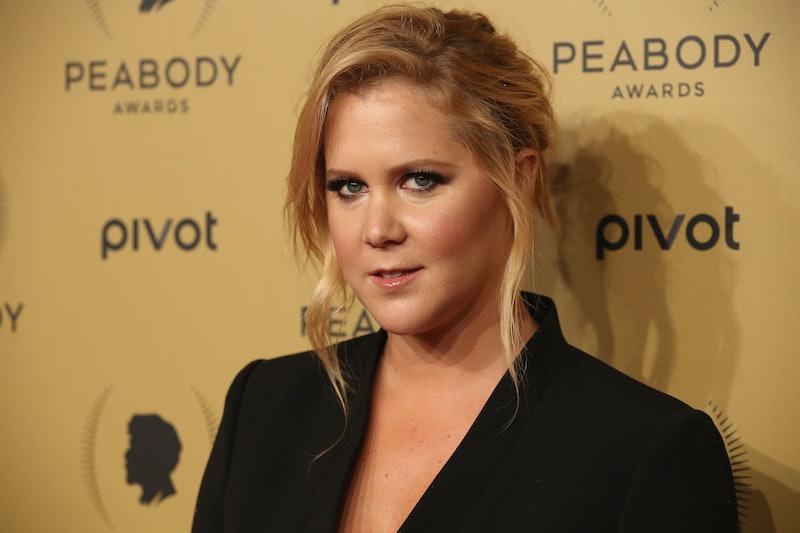 If there's one comedian who is having a seriously huge year, it's Amy Schumer. Not only is her Comedy Central show Inside Amy Schumer killing it with sketches that are simultaneously feminist, raunchy, and hilarious, but she's also become a bona fide movie star with her subversive romantic comedy Trainwreck. Oh, and just in case this all wasn't enough to make you believe that Schumer is the coolest girl in the world, she's also teaming up with everyone's other celebrity BFF, Jennifer Lawrence, for a new movie that the two women are writing together. Luckily, this comedienne's roll doesn't seem to be slowing down any time soon: Inside Amy Schumer was also renewed for a Season 4, proving that it's Schumer's world — and we're all just lucky to live in it.

It's not particularly surprising that Schumer's show was renewed by Comedy Central — in fact, it was renewed for a Season 4 before Season 3 even aired. That may sound like a leap of faith, but it's no worries when it comes to this show: Season 3 of the series has arguably been its strongest, with boundary-pushing themes and lots of pokes at the patriarchy. (Like this one. Or this one.)

It's not just the fans who recognized the show's awesomeness, either: the Emmys took note, too. The Television Academy nominated the series in the Outstanding Variety Sketch Series category, as well as six other 2015 awards — including one for Schumer herself as Outstanding Lead Actress In A Comedy Series.

Unfortunately, we may have to wait a while for a new season of Schumer's hit sketch show. Though an air date has not yet been confirmed, based on previous seasons, it seems that Season 4 of Inside Amy Schumer will premiere some time in April of 2016. If that's a whole lot further away than you'd like it to be, you're not alone: the thirst for more Inside Amy Schumer is so very real.

Since we have to wait for more of Schumer's beloved comedy series, here's what I'm hoping we'll see once the show returns — though I'd be just as happy with more of the same:

One Direction parody "Girl, You Don't Need Makeup" made me howl with laughter (can we please squash boy bands singing about how they love girls who don't have confidence in their own beauty?) and I'm not the only one: The song received a well-deserved Emmy for Outstanding Original Music And Lyrics this year.

Now that Schumer and J. Law are BFFs, I expect the Hunger Games actress to make at least one appearance in a Schumer-penned sketch.

And by the 'F' word, I mean feminism. (Though that other word is in there a lot, too.) The "Last F*ckable Day" sketch (featuring Patricia Arquette, Tina Fey, and Julia Louis-Dreyfus) points out how absurdly the entertainment industry treats women as they age.

Schumer as a Tami Taylor-esque football wife in the fictional series Football Town Nights ?! Literally everything I have ever wanted, ever.

Season 4 may be a long way away, but the wait is so, so worth it.

More like this
James Marsden Kept Teddy’s Westworld Season 4 Return A Secret “For Years”
By Brad Witter
Where Is Oscar Torres In 'Only Murders In The Building' Season 2?
By El Hunt
Everything To Know About The Bear Season 2
By Brad Witter
We Finally Know When 'Grey’s Anatomy' Is Coming Back
By Brad Witter
Get Even More From Bustle — Sign Up For The Newsletter