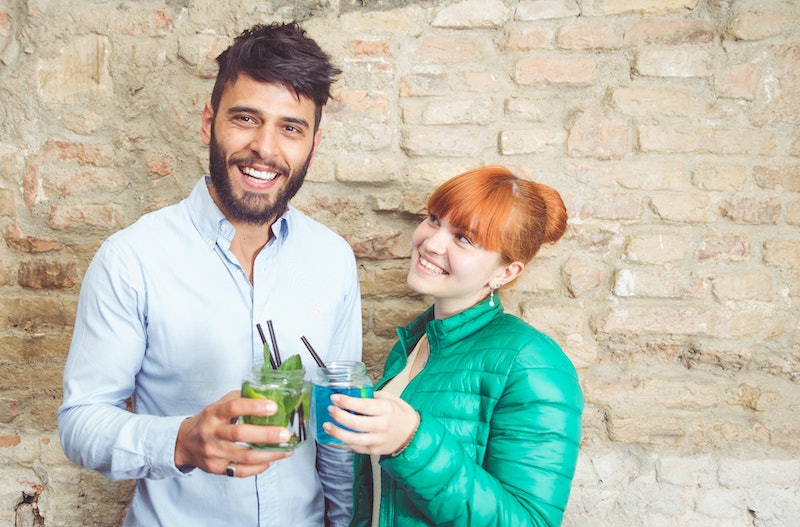 As a woman in 2015 trying to successfully navigate her way through the dating scene, I can confidently say without a doubt that dating rules are stupid. I mean, honestly. Do I really need to wait around for a guy to approach me in order to know that he truly likes me? No. While it’s totally nerve racking to just put yourself out there, the best things in life never happen without a little bit of risk. Besides, who doesn’t like a confident woman who seemingly has her sh*t together? That’s why, when it comes to dating, the number one rule you should probably follow is, there are no rules. Do what you want. Go with the flow. Trust your gut. Do what feels right for you. Most importantly, stop overthinking every little thing and just have fun. Isn’t that what dating is supposed to be about?

In the latest edition of “I Want It That Way,” Bustle sat down with The Bachelorette’s Nick Viall to discuss his thoughts on the dating rules that were popularized by Ellen Fein and Sherrie Schneider’s book, All the Rules: Time-tested Secrets for Capturing the Heart of Mr. Right . While The Rules first came out in the mid-90s, they re-released it in 2007 with an updated version for the Tinder-using, texting generation.

Here are six dating rules that are completely outdated, because finding love doesn’t need to be done through strict guidelines.

1. Don’t Talk To A Man First And Don't Ask Him To Dance...Otherwise How Will You Know If He Likes You?

Don’t talk to a man first? So, women are only allowed to speak if spoken to? Uhm, no thanks. Women are constantly told to sit pretty and wait for the men to approach. Be passive. If a man is interested, he will make the effort. If a woman does approach a man, it’s generally assumed that she’s needy and desperate. Ladies and gentlemen, we really need to stop thinking this way.

As Viall says, “It’s all kind of silly. Why does it even matter? It just seems weird to have to follow guidelines.”

2. Don’t Stare At Men Or Talk Too Much. Looking At Someone Is A Dead Giveaway Of Interest. Let Him Look At You.

Going by rules one and two, women should neither look nor speak to men or else men will think they’re interested. Here I thought this was a rule book in order to help land the man you’re going to marry.

“If you combine rule one or two, you have someone unapproachable,” Viall says. According to Viall, no matter how attractive he finds a girl initially, if she’s playing up the “bored girl” and not engaging, he’ll quickly lose interest.

“I don’t care enough to want to try to warm the girl up with conversation,” Viall says.

Bottom line is, men (or women) aren’t mind readers. If you’re out there looking bored and giving off the vibe that you don’t want people to talk to you, they’re not going to talk to you.

3. Don’t See Him More Than Once Or Twice A Week

According to the rules, if you see a guy more than once or twice a week, he will eventually get bored of you. But let’s be real here. You’re looking for a relationship. When you start dating someone new, you’re still trying to showcase the best sides of yourself. If you’re only seeing a person once or twice a week, how are you really going to know how they are in their everyday life? For all you know, they could totally suck as a person, but you just don’t know it.

“If I’m only interested in you because I’m not seeing you, that’s a red flag,” Viall says. “I want someone who I find interesting. You’re looking for your best friend. At the end of the day, I want to have a lot of fun with you and be entertained by us just having lunch or hanging out … If I like you, I want to find out if it’s just a phase. I want to find out if you’re going to bore me after three dates.”

4. No More Than Casual Kissing On The Very First Date.

It’s safe to assume they mean to keep things PG with your closed mouth pecks. But if I’m on a date with a guy and things seem to be going well, if he gives me a first date peck, I’m going to assume he’s not exactly feeling the same way.

“If I’m out on a first date and I’m feeling it and vibe-ing it and we have good chemistry, I’m going to want to kiss you. If I do kiss you, there’s no way it’s going to be peck,” Viall says. “If you’re going to kiss someone, kiss someone.”

After all, you only get one first kiss. So, please don’t make it an awkward thing.

If he repeatedly forgets to buy you a gift for your birthday or Valentine’s Day, then sure, you can re-evaluate your situation, but honestly. Flowers and jewelry? Is that really necessary? It seems very old-school and not all women want those two things.

According to the rules, you must wait at least four hours to text him back and make sure you write fewer words than his original text. Ugh. What games!

"We always have our phones on ourselves. So, if I’m texting someone who waits four hours, I immediately know they’re playing some kind of game. To me, that’s annoying,” Viall says. “When you get into thinking about text response time, you’re getting into the weeds of playing the game … If you start analyzing texts, that’s a bad thing to do in general. You’re playing games with yourself more than anything.”