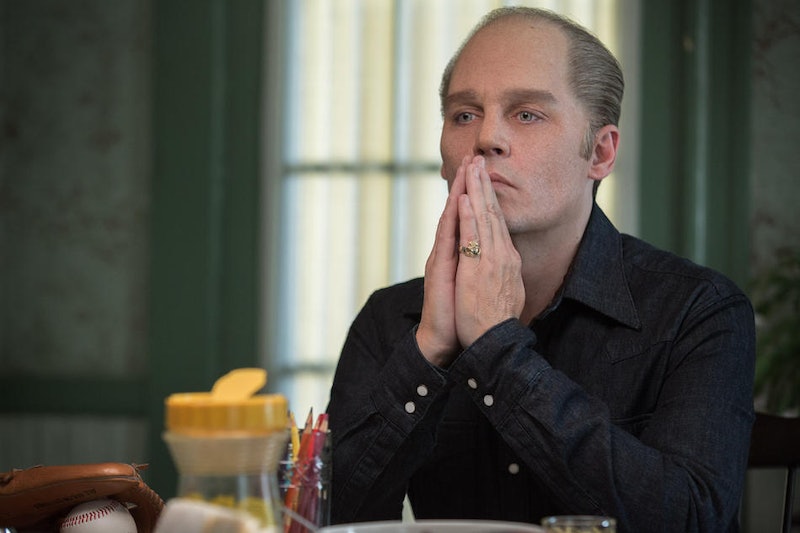 Johnny Depp's newest film Black Mass, his most critically acclaimed in years, depicts the real life saga of infamous Boston gangster and FBI informant Whitey Bulger. Bulger was the leader of the Winter Hill Gang, a vicious Irish-American mob in South Boston, from the late 1970s until 1995 when he went on the run from the law. Bulger was finally arrested in Santa Monica, California in 2011 after 16 years on the lam, and was subsequently sentenced to two consecutive life terms in prison for a number of crimes, chief among them being 11 counts of murder (he was charged with 19). Depp's depiction of Bulger in the film is stunning, leading many to believe that the actor could take home an Oscar for his performance. In fact, Depp's portrayal was so spot on, a lot of fans are wondering if he spoke with Bulger prior to filming. So, did Johnny Depp meet Whitey Bulger?

Although Depp requested to meet with Bulger in prison, the former mob leader declined. Bulger reportedly did not care for the movie's source material, the book Black Mass: The Unholy Alliance Between The FBI And The Irish Mob. A likely reason for Bulger's dislike of the book is the fact that he has consistently denied that he was ever an informant for the FBI, probably to maintain his reputation as a criminal. Because what's worse than a rat, right?

Even though Depp and Bulger never crossed paths, that didn't stop Depp from absolutely nailing practically every aspect of Bulger's character. Here are all the things Depp got right.

Depp underwent a serious transformation to achieve the look of Bulger. His face is a combination of makeup and prosthetics that took three-and-a-half hours to apply, but the most impressive piece has to be the custom-made forehead pieces Depp wore. Each one took 22 hours to create, (there were a total of 45 of them) and had each of their actual human hairs inserted into them by hand. Depp looked so much like Bulger during filming that some locals on set had a difficult time looking at him.

Everybody loves pulling out a Boston accent when given the chance, and let's face, most of ours suck. But Depp manages to cop Bulger's Beantown dialect so perfectly that upon seeing and hearing Depp's performance, Bulger's lawyer said it was like being around Bulger's ghost (even though Bulger isn't dead, but you get what he means) and that Depp sounded just like him.

When playing a bad guy like Bulger, it's easy to just go full-on evil and portray the man as some kind of supervillain. But Depp recognized that Bulger is an actual person, with real human feelings, and portrayed him as such. Depp told Deadline, "I think you have to approach him just as a human being in the sense that nobody wakes up in the morning and shaves or brushes their teeth and looks in the mirror and thinks ‘I am evil. I am going to do something evil today.'"

It was very important to Depp to make sure he understood where Bulger came from, and he achieved this by focusing in on Bulger's Irish-Catholic upbringing and poor immigrant family. "Because you’ve investigated and done a lot of homework so you’ve learned a lot about this person," Depp told ET Canada of his portrayal. "For me it was tapping into the Catholic boy of the Irish immigrant, the proud Irish immigrant family of the Bulgers."

Even though he wasn't able to meet Bulger personally, Depp did meet with Bulger's attorney, J. Carney. Depp credits Carney with helping make the role what it was, since the lawyer was able to give Depp details about Bulger that he would not have been able to learn solely from the mobster's public persona.

Although he may not have been inherently evil, Bulger still was an exceptionally violent and cold person much of the time. Depp's ability to go down to Bulger's darkness level for the film was so remarkable that it freaked out director Scott Cooper, who told USA Today, "I don’t know if I’ve seen a personality transformation like that ever."

Depp was so committed to getting his portrayal of Bulger right that he actually studied surveillance footage of the man so he could perfectly mimic the way he moved. The work paid off: There's not a trace of Jack Sparrow's trademark flowy movements to be found here.

Johnny Depp has suffered a string of critically-panned films, but his portrayal of Whitey Bulger in Black Mass is reminding fans that this guy is an outstanding actor... while simultaneously scaring the crap out of anyone who's ever met Bulger.