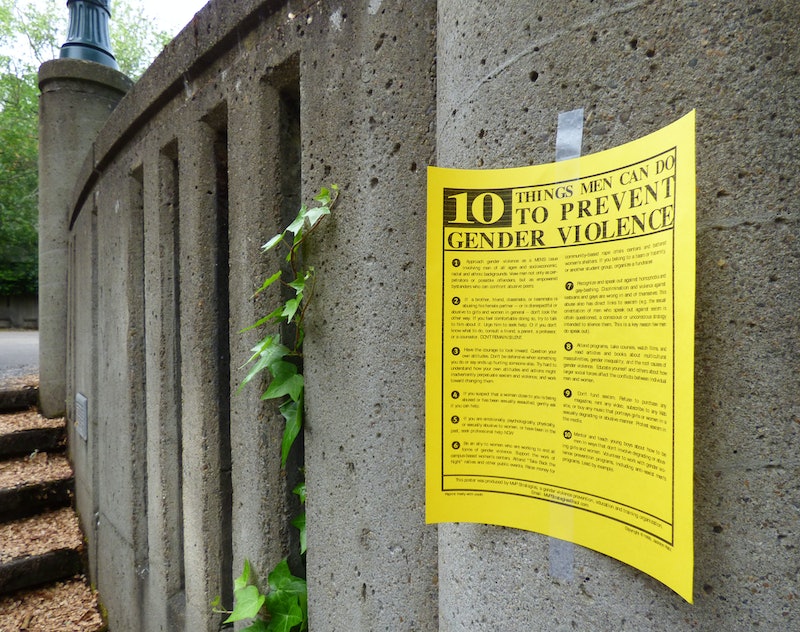 Most colleges are now in session, which means daunting course catalogs and jaw-dropping textbook prices. It also hopefully means that students will be educated on the problem of rape culture on college campuses around the U.S. — and how to create a culture of consent instead. One in five women experiences attempted or completed rape during college, and many of these assaults could have been avoided if students understood what constitutes consent, how they can make sure they've secured it, and how to intervene if they notice something suspicious.

Some schools are already off the a rough start on that front: Fraternity brothers at Old Dominion University in Norfolk, Va., hung signs outside their house with messages including "freshman daughter drop-off" and "go ahead and drop off Mom too..." to greet new students and parents as they arrived at school.

Meanwhile, however, some schools and other organizations are doing what they can to combat rape culture, also in the form of posters — though some have done a better job than others (these "consent is bae" posters hanging around Columbia, for example, have been criticized for trivializing consent and appropriating African-American culture). Here are some posters that should be hanging on the campuses of every school to teach students that sexual assault is not material for jokes but a serious issue that they have the power to mitigate.

The UK organization to support sexual violence victims originally created a "consent is sexy" poster for people to print and hang on campuses but, after receiving criticism that this phrase implied consent was optional, made a new one with the slogan "Be consent aware." Both posters demonstrate a helpful dialog for students to take into their dorm rooms:

"Are you ready for this?"

These words are simple but effective for young people who may not be comfortable with much bedroom communication.

McMaster University in Ontario put the poster above in their men's bathroom (or, should I say, washroom?) encouraging men to call out friends who catcall. "You can ask him to stop, or tell him it's not cool. But if you don't help her, you're helping him," it reads. This is part of a larger campaign throughout Ontario called #WhoWillYouHelp, which encourages people to say something when they notice signs that sexual violence is occurring. Other scenarios addressed in the posters include "someone is taking your drunk friend home with them" and "your friend is taking advantage of someone drunk at a party."

In case anyone was wondering when it's OK to say no, it's always OK to say no, this poster reminds us. During college, students sometimes receive the message that this is the time to go wild and turning down sex makes you a prude or not sexually liberated. Saying "no" should be OK, not just with the person you're saying it to, but also with you and your peers.

Between these and those #WhoWillYouHelp posters in its bathrooms, this school is killing it with consent education. Sam Godfrey of McMaster’s Student Health Education Centre writes in a blog post that the school's posters aim to show "gender-neutral exchanges between two hypothetical parties demonstrating some key (yet often ignored) aspects of consent. Moving far beyond the limiting discourse of 'no means no,' the posters illustrate the more accurate message of 'yes means yes,' taking into account factors like drunkenness, prior sexual activity and coercion." The one above addresses alcohol, an issue relevant to many college students, but there also posters pointing out that consent for one activity doesn't constitute consent for everything, that you don't automatically have consent today for what you did yesterday, and that "I don't know" is not consent.

This campaign has undergone a number of iterations, with posters teaching students that past consent is not future consent, that sexy Halloween costumes are not consent, and how to talk to somebody who has been sexually assaulted. Most recently, the "It's on us" posters around campus display quotes from different faculty members about their job to encourage a culture of consent — because it is truly on all of us to both prevent sexual violence from happening and respond compassionately when it does.