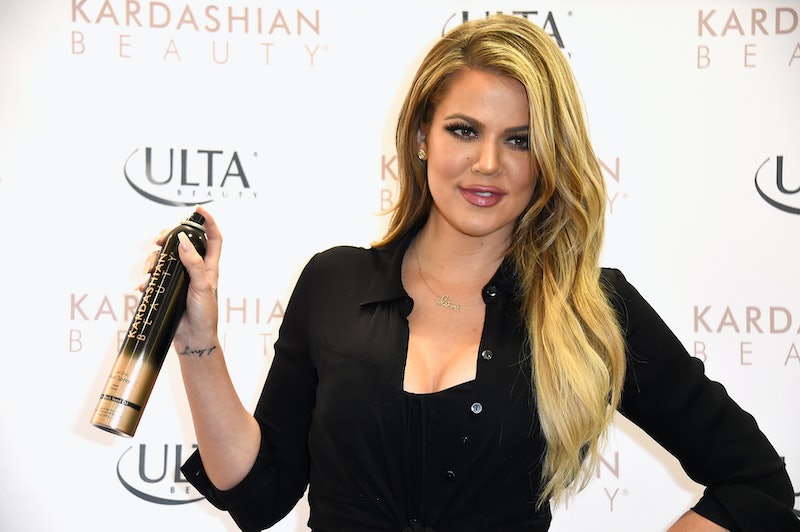 Khloé is by far the best Kardashian, in one writer's personal opinion (and a few others', too). In the eight long years she has been in the public eye on Keeping Up With the Kardashians, Khloé has always stood apart, serving as a Greek chorus and calling out the crazy clan of Kardashians/Jenners/Wests/Disicks that surround her. Besides often seeming like the only Kardashian with any common sense, Khloé is the best with the tough love and telling it straight. In a new clip from this season of Keeping Up With the Kardashians , Khloé tells Kim that she wants her to stop judging the fact that she still keeps in contact with her ex-husband Lamar Odom. And this just further proves that she has the most self-awareness and common sense of any of her family members. Plus, she's totally right! Her relationship is her and her ex-husband's business.

What's Khloé's secret to staying above the fray? She might never reveal exactly what keeps her level-headed and cucumber cool, but somehow she manages to pull it off even with the crowd she's constantly around. Let's celebrate Khloé for keeping it real even in the middle of a krazy world.

1. She Told Kim To Stop Judging Her For Lamar

In the new clip from an upcoming episode of KUWTK , Kim gets judgey-wudgey with Khloé when she reveals to her sister that she still keeps in touch with her ex-husband. Khloé and Lamar finalized their divorce earlier in 2015, and the youngest Kardashian sister tells Kim that it's more complicated than just cutting off contact. She ends it with this incredible line: "I don't ever come at you about all your trifling *beep* you used to do before you got married, so take a chill pill, slore." Conversation over.

2. She Laughed At The Ridiculous Rumors About Scott & Kylie

One of the darkest recent rumors about the Kardashian-Jenners happened earlier in 2015 when there were ugly whispers that Scott Disick was cheating on Kourtney... with her little sister, Kylie Jenner. Khloé had the perfect tweets in response to the rumor and her jokes proved just how absurd the accusation really was.

3. She Calls Out Her Family For Being Crazy

One of the best foil pairs of KUWTK is Khloé and Kim. Sometimes Kim can be so dramatic, so it's amazing to see her little sister balk at her utter ridiculousness. My favorite is this legendary clip where Kim LOSES it when Khloé wakes her up from her beauty sleep, calling her an "ugly little troll," and Khloé can't believe her overreaction. Sisters be crazy.

4. And Always Calls Kris Out For Her Momager-ing

It would be tough to stand up to the formidable Kris Jenner, but Khloé is never afraid to remind her mom of that tricky 10 percent. I love it.

5. She's Able To Brush Off Rumors About Herself

Like all the Kardashians, Khloé is subject to the viscousness of the rumor mill, but she knows that rumors are fueled by hatred. One that persists, that O.J. Simpson is her real father, is horrible but she still laughs about it — and even goes so far as to make inappropriate jokes about it, like she did on Chelsea Lately.

Earlier this year, Kylie, who just turned 18, bought a house. Well, more like a $2.7 million dollar mansion. But Khloé wasn't about to let her forget that being a homeowner means lots and lots and lots of responsibility. She brought her sister back down to Earth when she and Kim gave her a good old-fashioned lecture.

7. But Sometimes, Even She Can't Take It

Khloé is only human; sometimes even her patience is tested. And when it is, she has the absolute best reactions to express her frustration and general incredulity about the circus that she lives in.

8. In General, Though, She's Got A Great Attitude