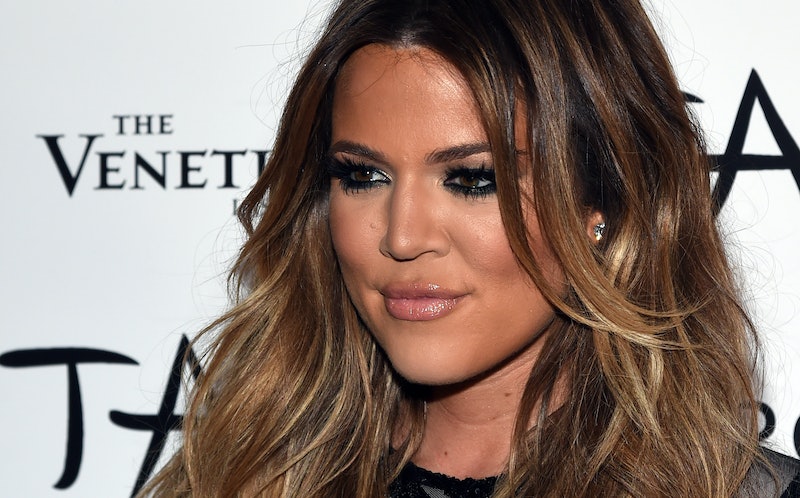 It is a truth universally acknowledged that Khloe is the best Kardashian. During 10 seasons of Keeping Up With the Kardashians, Khloe has been our Greek chorus because most of the time, she's chill, rational, and most importantly, hilarious — just trying to conquer the immense struggle of staying sane with a family like the Kardashian-Jenners. I love the family as a whole, but like I said, Khloe has my soft spot. Thank god we have her, but Khloe Kardashian is susceptible to the same ugly rumors that plague Kim, Kourtney, Kris, Kylie, Kendall, Caitlyn, and the rest of the subsidiary Kardashians (Scott Disick, Kanye West, Rob Kardashian), are victim to.

Obviously, rumors are par for the course when you're a member of the most visible family in America, and on the whole, the Kardashians know which battles to pick. They don't have time to personally dispel every single lie that gets spread about them. But sometimes, you can't let the dummies have the microphone for too long, and when it counts, and Khloe will set the record straight when things gets too out of hand.

Here are seven of the kraziest Khloe Kardashian rumors — so far:

If there's one thing that Internet trolls love to do, it's body-shaming women. Even though Khloe has been happily and proudly sharing her journey with fitness and health on her social media accounts and in interviews, some scumbags like to tear women down at every turn. In June, Khloe couldn't hold back from dispelling rumors that she got liposuction, getting pissed on her Twitter account. "Why is it so hard to give credit where credit's due?" she asked. Good q, Khloe.

2. She's back with Lamar

Why this rumor gets so much traction, I will never know, because clearly Khloe and Lamar are over. But still, people love to hear themselves talk, so there's always gonna be someone who INSISTS that Khloe and Lamar, who divorced back in 2013, are getting back together, or are back together, or never split up. Gossip Cop thankfully continues to crack these stupid rumors wide open; the latest being when Life & Style reported in April of this year that Khloe was giving Lamar another chance by giving him a checklist of things he could do to get back into her life.

3. No wait, she's having Lamar's baby

Not even two weeks after Life & Style reported that Lamar and Khloe were back together, the magazine said that the two were planning on starting a family together, and that Khloe was finally successfully pregnant. I don't know why it's a national pastime to speculate about who's got a bun in the oven, but here we are. Gossip Cop destroyed this fake baby news, too.

4. She's been hooking up with Scott Disick forever

This rumor is so absurd I could just fall over and die. It's like a caricature of a rumor. Scott Disick apparently was tearing the Kardashian family apart, because not only was he cheating on Kourtney, he was doing it with... HER OWN SISTERS (dun dun dun). Obviously it's just cheap fodder alleging that Scott Disick was sleeping with Khloe AND had a "fling" with Kendall Jenner. This story is just all kinds of gross, weird, and wrong, and Scott and Khloe laughed it off later as totally stupid, because it is.

5. She had a crush on Floyd Mayweather

Uh... what? I guess OK! Magazine just wanted to profit off of combining a Kardashian and Floyd Mayweather in one headline after the Pacquiao vs. Mayweather fight in May, saying that Khloe wanted to date the boxer. There's really only one response to that: "OK..."

6. She was jealous of her sisters having babies

This one is almost impressive in how depressing and misogynistic it is. Supposedly, Khloe was long jealous of her sisters because of how easy it was for them to have children. When Khloe first married Lamar, she did really want a child, which was documented on KUWTK, but that desire was turned into something desperate in the media. What's the point of saying that Khloe's life is empty AND pitting her against her sisters in some sort of weird womb competition? In 2013, Khloe spoke to Redbook and slammed the rumors, saying, "Do I wish people would quit asking me about it 24-7? Yes, but I don't regret it," she said. So shut up, everyone.

7. OJ Simpson is her father

The most insidious and long-lasting rumor about Khloe is that Robert Kardashian isn't her real father — OJ Simpson is. The paternity rumor has been around so long, it's tough to know where it started, but the story goes that Kris Kardashian had an affair with the football player who was a family friend. Of course, they all became the subject of one of the biggest murder trials in history, but there's no need to rehash all the ugly details. People are still proliferating this rumor, and Khloe, against all odds, has a great sense of humor about it. In 2014, in an appearance on Chelsea Lately , she even made a pretty crass joke about the whole thing: "I hope he's not my dad, because I had sex with him once," she said. Well, that's one way to get people to pipe down with their fibbing.

Khloe's sense of humor is her saving grace in the face of a tabloid mill that could drive anyone crazy. Especially with regards to the rumors about who her parents are, Khloe takes the best path by just living her best life; on Father's Day this year, she posted a sweet Instagram of a photo of Robert Kardashian and Caitlyn Jenner:

She's above it all, and is leaving the gossips on the low road.