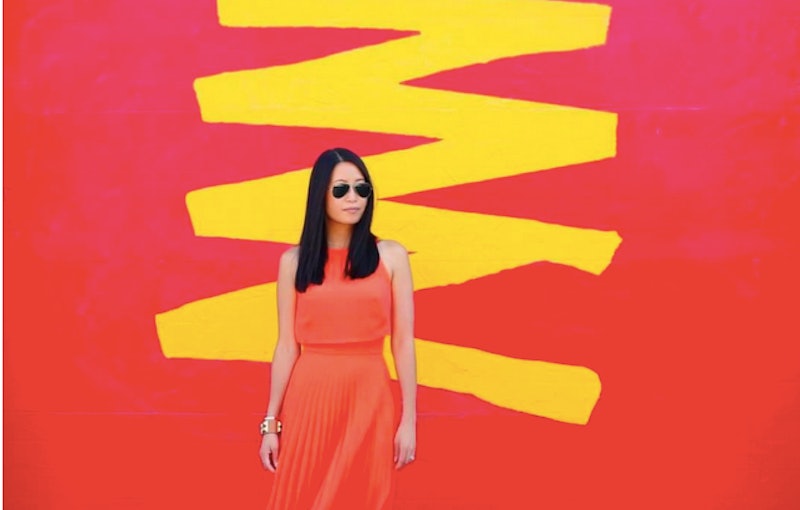 There's a bit of a stigma when it comes to doing things alone. Those people that are out eating desserts or nursing cocktails alone during evenings must be friendless; the ones sitting on festival lawns solo or traveling across state lines without company must have a pretty lonely life. Or how about those select few that buy popcorn for one at the theaters, or book tours without a buddy to loop arms through? They probably own cats. Many, many cats.

While those might be the outdated thoughts that circle around tables for one, you and I both know that's not really true. Stepping out without your squad doesn't mean the squad doesn't exist to begin with — it just means you're comfortable enough with your own thoughts and company to hang out alone. But sometimes, that's easier said than done. While some of us are completely content with the company of a book or the activity of people watching, the rest of us could be thrown into a panic attack over the prospect of spending an evening alone in public.

For those of you that fall into the latter, these tips are for you. Here are five easy tips on how to get comfortable going out alone and you just might begin to enjoy those liberating days without company.

1. Remember That No One Really Cares You're Alone

One of the main reasons people feel weird about doing things alone is because they think everyone within a five mile radius is judging them. False. Even if someone notices you, they're probably not thinking about your lack of a partner. Sure, the stigma about being alone exists, maybe, but nine times out of 10, people probably aren't giving you much thought.

Just think back on all the times you have seen someone doing activities alone. Odds are you weren't totally weirded out by them or can't remember anyone in particular to begin with, right? It's because it doesn't matter. For the longest time I'd have a near heart attack over the prospect of grabbing lunch alone at my neighborhood cafe. I felt like everyone would be silently judging me over the screens of their laptops. Where would I look for the whole hour? What would I do with my hands? How would I keep my brain from exploding with all the over-analyzing? It felt like too much... until I actually did it and noticed not one person glanced in my direction.

2. Remember That You Can Always Leave

Just because you've committed to going solo doesn't mean you have to stick it out the whole way through. Say you're going to a party all alone, but think there's a possibility you might start feeling too awkward an hour in. No one says you have to sit through the small talk or continue to hover outside of conversation circles — just grab your coat and leave when it feels like it's too much. The same goes with any other situation: Did you begin to feel bored while having a drink by yourself, or start to feel a little funny at a friend of a friend's happy hour? Just dip out; no one's stopping you.

For example, I like doing things alone, but have never quite gotten used to the feeling of waiting for someone at the bar alone. It immediately brings cringe-y feelings to mind and I always need to find something to do with my hands, whether it's obsessively looking through my phone or spinning my beer bottle round and round. Annoyed with that reaction, I would make myself practice getting comfortable in the situation by grabbing a quick drink alone after work. The first couple of times I left without finishing a full beer — and that's totally okay. No shame in the retreat. Sometimes it takes baby steps; do an hour here and do an hour there until you start feeling used to the idea.

3. Allow Yourself A Cheat

What's the first thing we reach for when we're uncomfortable? Our phones. What's a great distraction tool from nervously glancing around the room? A book. How can you keep your mind occupied and off the fact you have no one to talk to? A crossword puzzle. There's no shame in distracting yourself in the beginning until you get comfortable with the idea of just sitting there and blatantly people watching or hanging out with your own thoughts.

I always carry a small paperback book with me or a little notebook and pencil, so if I ever find myself waiting for someone or deciding to do the afternoon solo, I have my little cheats that will ease me into the situation. Remember, practice makes perfect. Eventually you will feel comfortable enough to go without these distractions, but you have to allow yourself the time to do so.

4. Pick Something To Focus On

Say you're going to lunch alone. Sure, you can distract yourself with a book or text your friend all through the chicken sandwich — or you can take it as a chance for some introspection. If you head outside with a game plan of what to think about, you'll feel more confident (and productive) sitting in one place alone.

Maybe you want to go on a trip this year, whether big or small. Maybe you want to think of a career move, or set yourself some personal character goals. Find a topic to dissect in your head and then give yourself that hour or two alone to go through it, step by step. In the end you won't notice you just had a three-course meal alone, and you'll feel like you go something accomplished.

5. Realize The Advantages Of Going Solo

We're so used to being in crowds and surrounding ourselves with friends that we don't really question what the downside of having company could be. But if you want to teach yourself to do things on your own, listing the benefits of going solo during these activities could be motivation enough to go through with it. For example, one benefit is that you can do exactly what you want to do. You don't have to consult with anyone or check in on anyone's feelings but your own: You want to eat that whole giant brownie instead of dinner? Go for it. You want to spend five hours shopping one sales section? The afternoon is yours.

On top of that, you can flex your creativity and allow yourself some introspective time that you don't usually allow yourself on a daily basis. You can spend an hour writing down your thoughts at dinner, working through some problems you might have. You can fiddle with writing short stories or poetry, or take out the camera (or camera phone) and spend an afternoon taking interesting photos. I sometimes love going into downtown by myself and with my Canon, spending an afternoon pretending I'm a tourist in Chicago and finding new ways to capture the city with my lens. Going solo lets you spread your wings a little, and allows you to take the time to do the things that might make other people with you impatient.

6. Do Things You're Really Excited About

Say you got to the bottom of this list and you're still not convinced. You just can't imagine sitting somewhere alone, your nose awkwardly buried in your phone as you try to pretend you're not inside-out uncomfortable. To motivate yourself to leave the house alone, do something you're crazy excited about.

This will get you moving sans friends because you're super pumped about the prospect of it. Maybe there's a movie out you've been waiting years for and there's no one willing to see it with you. If you're jazzed enough about it, you won't have enough room to feel weird about the fact you're doing it sans pals.

For example, I've mentioned before I sometimes feel a little vulnerable grabbing drinks by myself. But I never, ever feel odd sitting in a cupcake bakery, taking up a booth and inhaling red velvet cupcake. I can sit there for hours just people watching and eating cream cheese frosting. The reason? Because I'm passionate about my sweet tooth and having to great a time to care.

7. Occupy Yourself With An Activity

If you preoccupy yourself with an activity you won't have time to notice your uncomfortableness. Go to a concert or a story reading; buy tickets to a play or go mini golfing. Try taking a cycling class or pick up art classes. Whatever it is, if it's an activity that preoccupies your mind, you won't have the time to realize you don't have company. You'll be having fun, and all on your own.

When mastered, the art of being alone is one of the most amazing things in the world. No matter where you are or who you're with (or not with), life becomes full of possibilities almost instantly. Nothing more exciting than that.