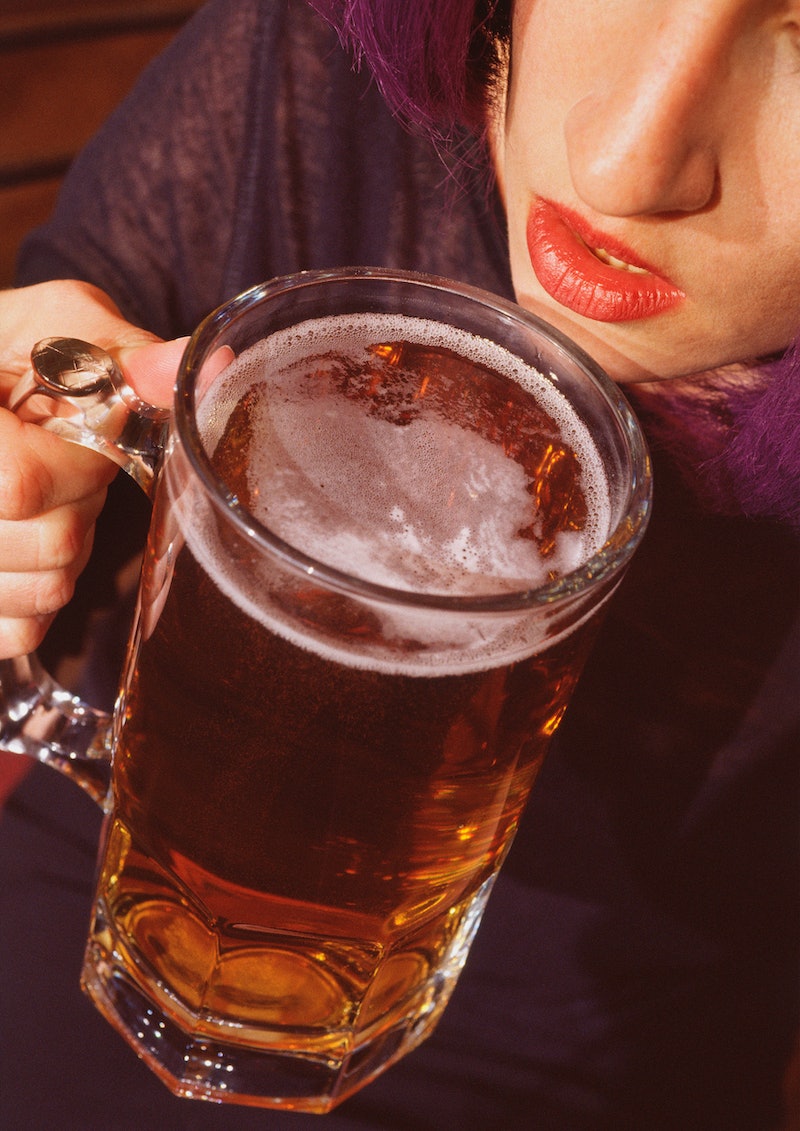 While Zoe, 33, a Chicago chef, can easily pour herself a glass of zingy organic wine at home when her friends are busy, she finds herself riding intentionally solo at her neighborhood bar all the time. “I love reading, I love having a nice drink, but most of all, I love being by myself,” she tells Bustle. “You can’t beat the ambiance of a busy bar, or the indulgence of being served a drink — in a cup you don’t have to wash.”

Whether you've had a long day at work, got a craving for a fancy cocktail, or are in the mood to go out, but none of your friends are handy, there are plenty of reasons to a bar alone. You can make a dent in that one book that's been on your nightstand for the last five months, people-watch other patrons, or just regroup and resettle your thoughts. Plus, with bars largely closed during lockdown, there’s a lot of lost time to catch up on. Per The Washington Post, people missed their local bars so much over the past two years that they created platforms that recreate bar experiences virtually to support their favorite watering holes. Virtual Cheers — a website lets you to pick a neighborhood bar backdrop, host a virtual happy hour, and raise money to support the bar and its employees — was as close to a perfectly poured, foam-free lager as many people got over the least year.

Getting dressed up, getting out of the house, and feeling the energy of others IRL might be a very welcome change. But the tricky thing is, a lot of people are nervous about actually pulling up to that barstool alone. All eyes are on you when you wine or dine alone — or so people think. In reality, people who go to bars alone on the reg say it’s a power move that’s also good for the soul.

Is It Weird To Go To A Bar Alone?

“When I see someone alone at a bar, I think, ‘Wow, they’re very cool and confident and stable,’” Maddie, 28, a writer in Brooklyn, tells Bustle. “And yet, when I go to a bar alone, I have to fight insecurities that try to convince me that everyone thinks I’m a loser and there alone because I have no friends. It makes no sense.”

“It’s only weird if you make it weird,” Bri, 31, a social media manager in New York City, tells Bustle. “The first few times I went to a bar alone, I felt very awkward, but then I just decided to muster some main character energy and pretend I was a very interesting and confident girl an a movie, and that I’d do this sort of thing all the time, and then it wasn’t weird anymore,” she says.

If you're going to walk in the bar feeling apprehensive and 100% certain the night is going to be a flop, then that's probably the way it's going to go. Instead, prior to arriving at the bar, solo bar-hoppers suggest getting yourself excited about being alone. Lean into your intentional me-time and resist the urge to think about what others are thinking.

“I try to treat myself the same way I think of others now,” says Maddie, “and just remind myself that I am cool and confident and stable, and alone by choice!”

The Benefits Of Going To A Bar Alone

Going to a bar alone “is a reminder of your inherent value,” says millennial life coach and therapist Caroline Given, L.C.S.W., so long as you mix it up with doing other activities with friends. “The times that you treat yourself shouldn’t just be in the company of others, because that implicitly sends a message that relaxation or treating yourself is dependent on other people or only for celebrations or accomplishments,” she says.

What’s more, Given says that taking a trip out in public alone without social distractions can be an exercise in mindfulness. “It’s good to play observer sometimes instead of constant social participant. You can notice so many special little things that you might never have otherwise.” Particularly if you have anxiety, going to a bar alone can challenge you to be “the type of person who feels comfortable your own company and can enjoy yourself without needing security blankets,” she adds.

What To Do At A Bar By Yourself

If you're going alone to a bar, chances are you'll want to have something to keep yourself occupied. Try to bring stuff that will entertain you if you don’t want to be disturbed, or bring things that could act as potential ice breakers if you feel like being social.

“I always bring a book and a notepad when I go to a bar by myself, but I don’t take them out right away. I give myself a chance to settle in and be present and open to talking to people for a few minutes before closing myself off,” Zoe says.

Given says that keeping your devices in your pocket is crucial if you want to give people around you permission to speak to you. “Take your AirPods out!” she says, noting that it sends a message that you’re not open for conversation. If at some point you'd like to chat with someone but don't know where to start, ask the person next to you if the have any drink recs, or how they’re liking their order. “Try to approach convos with a stranger by thinking, ‘What could I ask this person that could get them to tell me a story?’ and avoid things questions that only yield yes or no answers,” Given suggests.

Just make sure that while you’re exuding that big main character energy of the protagonist at the bar, you have a safe ride home squared away, you don’t leave your drink unattended, and let someone know that you’re headed out alone before you go. “Share your location with a friend or family member on your phone, and ask the bartender to put your drink behind the bar if you have to go to the bathroom,” Given suggests.

“Have low expectations about what’s going to happen,” Zoe says — like, don’t go to the bar with the hope of a perfect meet cute or new best friend. “If you don’t expect much, there’s a lot of room to be pleasantly surprised by candid conversations and connections with new friends in the neighborhood.”