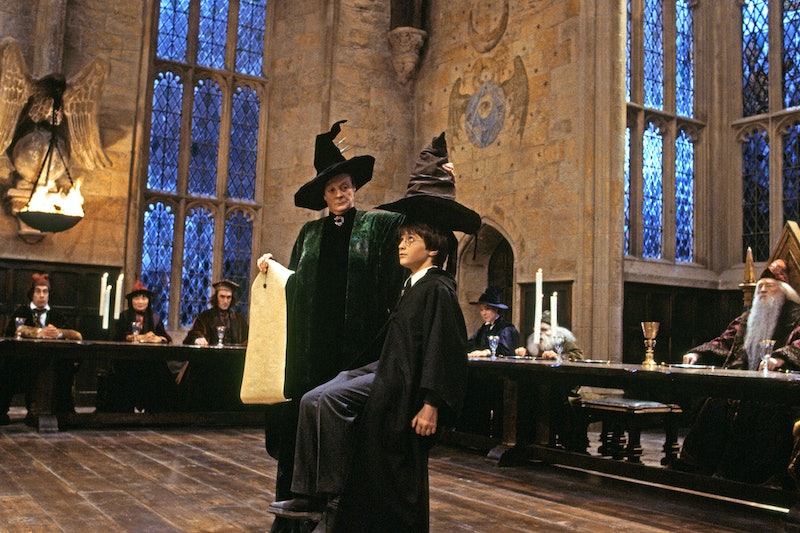 Listen, everyone. I have ... something of confession to make. For years I have identified as a Hufflepuff, but I fear that in committing to this decision, I have also been living half of a lie. See, the truth is that when I took the Pottermore quiz one fateful day in 2012, it told me at the end that I had to make a choice: Hufflepuff ... or Slytherin.

I laughed. It had to be a joke — J.K. was JKing me. How can a person be half-Hufflepuff and half-Slytherin? It was like being told that I was half-cheese and half-piano. It doesn't even make sense. How can you be cutthroat and ambitious, and also loyal and patient? That aside, I was almost certain that my nerdery would have landed me in Ravenclaw. I basically slept in my Hermione costume with a textbook tucked under my arm through the late '90s and early millennium.

I picked Hufflepuff because it seemed right at the time, but like Harry, I always wondered: What if I really am a Slytherin? I understand that by virtue of not choosing Slytherin, I am not one; but at the same time, I sensed it in myself more and more. Competitive. Single-minded. Looking really dope in green. ALL THE SIGNS WERE THERE. So I decided a few years later to take the test, answering as honestly as I could, only to find that this time I was in ... Gryffindor?!

The trouble is, some of us are Divergent within the Harry Potter world. We are a little bit of all the houses, and not enough of any of them, and no amount of diagnostic quizzing is going to solve that. So here I am, years on the other end of my existential confusion, to share with you the struggles of not knowing what Hogwarts house you would really get sorted into:

You Have No Idea What Color Swag To Buy

Let's be real: 90 percent of the fun of getting sorted as a Muggle is smugly wearing your House scarf the second the weather dips below 50 degrees. But what about those of us who are split amongst the Houses? Do we wear three scarves, and slowly choke to death on our morning commutes? Do we buy so many mugs that our shelves eventually cave in and squash us? Buy so many socks that even Dobby would reel back in horror?!

... So You Inevitably Just Buy All The Swag

Those weren't hypothetical questions. I already did all those things (R.I.P., my bank account). I'm half convinced that the Sorting Hat is a marketing tool like made up holidays to get you to spend more money, but I'm not convinced enough to actually, you know, exhibit any self-control.

If I'm talking to a fellow Hufflepuff, then hell yeah, #HufflePride. But if I'm talking to a Gryffindor (nobody's smugger than a Gryffindor, amirite??), then it's almost like their Gryffindor rubs off on me, and I feel compelled to blurt out that I'm "technically" in their house, "kind of" (because I'm "kind of" in them all, and I'm a poser/trash person). I think it's because we are so desperate to belong somewhere that we just try to act like we belong everywhere.

I grew up in the '90s. Saying you don't belong to a certain House just isn't a thing my generation does. Maybe by the time Gen Z grows up humanity will be more accepting of people like me, but until then, we'll just have to endure people saying stuff like, "Oh, you're just sore that you're in Hufflepuff/Slytherin/[insert House they feel like discriminating against here]." Which brings me to ...

People Think That You Have Prejudices Toward Houses, And That's Why You're Waffling

I am a proud Hufflepuff, the same way I'd be a proud ... wherever the hell I really belong. I love all of the Houses, because as cliché as it is, we are all super special snowflakes worthy of admiration and respect. Being prejudiced about Houses is so 1999, guys.

You Feel A Constant And Ever Present Potter FOMO

It's the same reason we so faithfully pick football teams, the same reason join clubs, the same reason we fight wars: At the end of the day, we just want to be a part of something. It's human nature. We crave community. We flock in groups. We make families even when we are away from our own. And that's what Houses were really for at Hogwarts, right? To bring likeminded people closer together. Yes, it was an ultimately flawed system, but it DID cultivate friendship, and teamwork, and some sense of belonging. I WONDER WHAT THAT'S LIKE.

You're SO SURE What House You Belong In One Day, But The Next Day It Turns Out You Are Wronger Than Wrong

I have a theory: most of us, when we grow up, would not belong in the same House we were sorted into when we were 11. Like, I look at the human I was 13 years ago (skittish, studious, and painfully dorky) versus the person I am now (determined, confident, and painfully dorky), and my priorities are basically unrecognizable. I AM NOT FLAWED. THE SYSTEM IS FLAWED!!

Writing this article is, like, maybe the fifth or sixth time I've even talked about my struggles with getting sorted — this week. And when you're constantly word vomiting your #woes, of course non-Potterheads are going to be unsympathetic to them. You can't find solace in other outsiders like them; because you may be an outsider within Hogwarts, but they're so far outside that they aren't even in your galaxy anymore.

See? At our core, we're lost because we just want to be friends with everyone. We want everyone to like us and want to like everyone in return. We want to identify with ALL the things, be in ALL the Houses, and love ALL the humans in them.